The Medieval and Renaissance musical periods

The Medieval and Renaissance periods present two distinct cultures and worldviews in the human development. Unlike the Middle-Ages, several Renaissance scientists desired to learn about the earth apart from the idea of a Divine Creator, and philosophers brought in humanistic thinking. Innovations during this period like the gunpowder, telescope, microscope and the print press changed dramatically the people’s lifestyles and views of the world around them. Religion also varied greatly between these two eras. Reformation brought about turmoil during the Renaissance as opposed to the monastic life of the medieval period.

Turn in your highest-quality paper
Get a qualified writer to help you with
“ The Medieval and Renaissance musical periods ”
Get high-quality paper
NEW! AI matching with writer

One of the less obvious of these changes was that of music. In comparing Medieval and Renaissance times we can see a definite contrast in the style and content of what the music emphasized.

The Medieval Era (450-1450), also known as the “The Dark ages” in Europe began about 450 with the disintegration of the Roman Empire, and the most important musicians were priests. The majority of liturgical music throughout this era was plainchant (Gregorian chant), which indicates a single sacred melody, without accompaniment, sung by a single person or by a choir in which each member sings the same part.

In many respects, medieval chant is the same chant which can be heard in monasteries today, and much of the most important chant (or plainsong) was composed by early medieval saints. Another word to describe plainchant is monophony, which – as opposed to polyphony. It means a single sound, whether sacred or not.

The concept of mode was created to categorize plainchant, and is something which can often apply to polyphony in only strained fashion.

The other very important feature was that most medieval music was vocal. The plainchant conveys a calm, otherworldly quality. Its rhythm is flexible, without meter, and its melodies tend to move stepwise within a narrow range of pitches. The church modes were the basic scales of western music during the Middle Ages. They are like the major and minor scales in that they consist of seven tones and an eight tone that duplicates the first an octave higher. From paintings and literary descriptions we can find out that during this era instruments were used, and the prominent church instrument was the organ. It the beginning the organ was primitive, whose keys were operated by heavy blows of the fist.

The Renaissance (1450-1600) could be described as an age of Curiosity and individualism, Exploration and Adventure, The rebirth of human creativity. During this period, due to the lost of power of the church and the new humanistic ideas, musical activity gradually shifted from the church to the court. Musically, the Renaissance period is sometimes called the golden age of a capella choral music, because the music did not need instrumental accompaniment. The capella refers to unaccompanied choral music. The texture of the Renaissance music is chiefly polyphonic. Renaissance composers often used word painting, a musical representation of specific poetic images. Certain elements made Renaissance music sounds fuller than medieval music. Composers considered the harmonic effect of chords rather than superimposing one melody above another. Also, typical choral pieces have four, five, or six voices parts of nearly equal melodic interest.

The two main Forms of sacred Renaissance Music are the mass and the motet. The mass is the liturgical music for church services, and the motet is a polyphonic choral work set to a sacred Latin text other than the ordinary of the mass. In the fourteenth century, for the first time, secular music had the upper hand in artistic developments. Renaissance secular vocal music was written for groups of solo voices and for solo voice with instrumental accompaniment.

Secular music contained more rapid changes of mood than sacred music. Secular vocal pieces for a small group of singers, usually unaccompanied is called madrigal. It originates around 1520 in Italy and it differs from the motet in the usage of a vernacular rather than Latin text, and the often use of word painting and unusual harmonies. One of the important features of madrigal is that it’s a piece for several voices set to a short poem, usually about love. Much of the instrumental music composed during the Renaissance was intended for dancing. Dance music was usually binary form AABB and it was performed in pairs, contrasting slow with fast or duple meter with triple meter.

The Medieval and Renaissance musical periods. (2016, Jul 24). Retrieved from https://studymoose.com/the-medieval-and-renaissance-musical-periods-essay 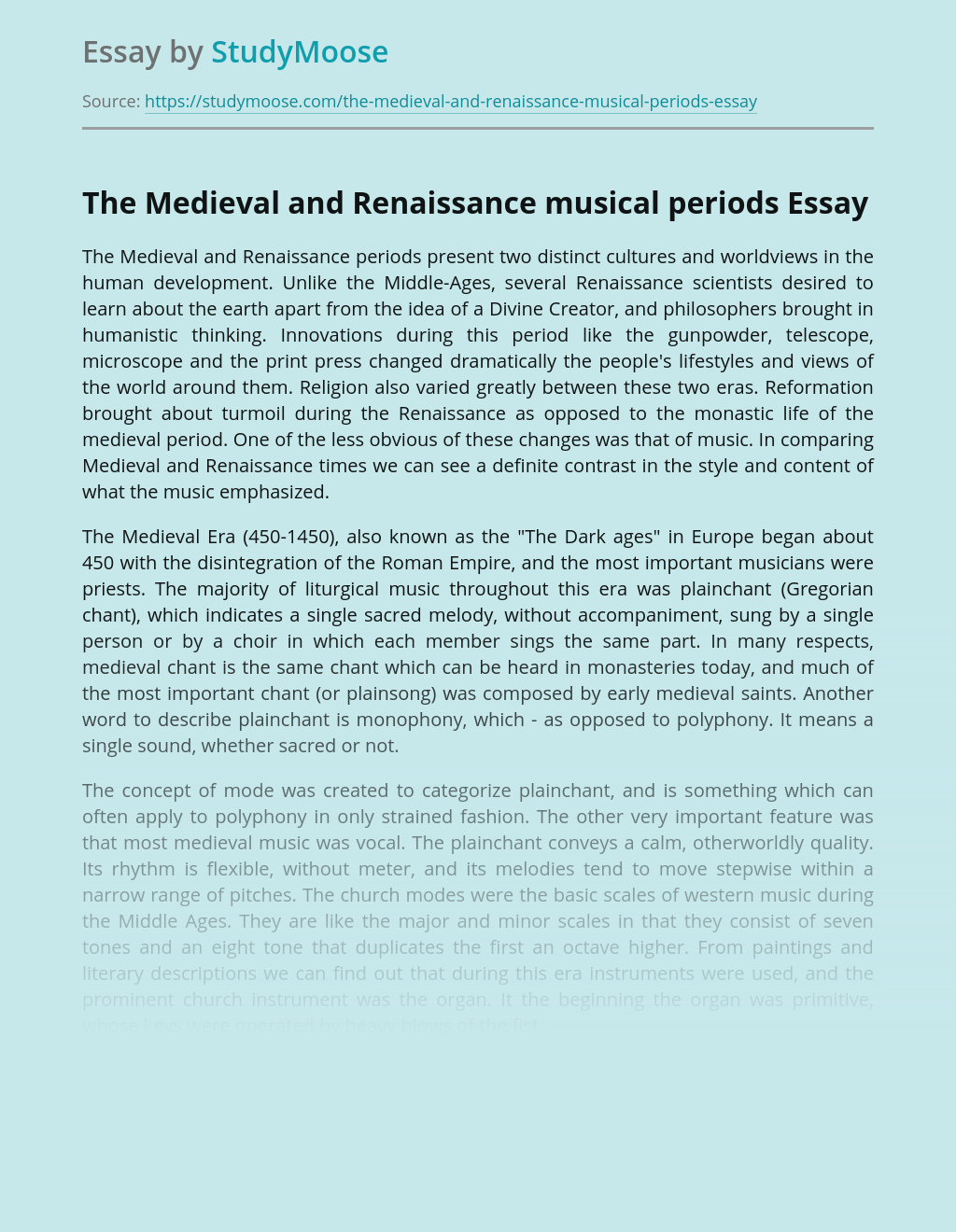 Turn in your highest-quality paper
Get a qualified writer to help you with
“ The Medieval and Renaissance musical periods ”
Get high-quality paper
Helping students since 2015
Stay Safe, Stay Original