When seeking two art periods to compare and contrast, fewer artistic examples provide a starker depiction of radically changing ideas and mentality than the art of the Middle Ages against that of art from the Renaissance. First, art originating from the Middle Age will be thoroughly analyzed for context. Afterward, art from the Renaissance period art will be analyzed next to it for its departures on from Middle Age techniques and thinking, before the two are finally systematically compared and contrasted.

Don't use plagiarized sources. Get your custom essay on
“ Middle Ages vs Renaissance Art Periods ”
Get custom paper
NEW! smart matching with writer

First, art from the Middle Ages, also called art from the Medieval period, characterized a European period of little social change, general poverty, and few scientific advances. The Catholic Church remained an imposing force upon Midieval society, and dominated much of daily life. Art clearly served the role of worship above all else, and the Catholic Church actually commissioned much of the artwork of the period. Much of this art filled churches and monasteries, and took the form of sculptures, paintings and drawings, stained-glass windows, metalwork and mosaics, among other forms.

The iconographical nature of the art is substantial, as it above all served the purpose of perpetuating the Catholicism of the early church. It was largely confined to Europe and areas that the Byzantine and Roman empires had once occupied, such as parts of northern Africa. It lasted almost a thousand years, from approximately around 500 C.E. to perhaps as late as 1400 C.E.

The depictions within the art reflected its purpose – worship. Religious icons such as saints, the Virgin Mary, Jesus and his disciples, and other depictions provided clarity and images for believers.

The images portrayed onto the media arguably reflect the times, lacking in brightness, movement, or attitude. The characters shown rarely appear upbeat. An excellent example that validates some of these generalities is Pietro Cavallini’s The Last Judgment. This painting in the Santa Cecilia in Rome uses drab colours to show what appears to be an angry Jesus overlooked by six angels, three on each side. While a beautiful work of art no doubt, the painting has little passion or movement and does not inspire anything more than fear from a fiery God.

This Medieval Art from the Middle Ages contrasts sharply with the Renaissance-era works in many key ways. First, Renaissance Art, while not entirely secular to be sure, had certain overtones of the humanism sweeping Europe. Next, its style exuberates brightness, passion, and an appetite for life that cannot be found easily in Middle Age art. Renaissance Art effectively superseded and ended art period progressing during the Middle Ages, and this mirrored social trends of increasing wealth and prosperity, upward mobility, and technological advances of the time.

While no doubt heavily influenced by the preceding art of the Middle Ages and often building off of some of its topic such as Christianity, Renaissance Art has a strong hint of humanism which afflicted its artists. This philosophy sought to change the nature of man’s relationship with God to exist outside the church’s realm, and the “Renaissance men” often meaning that these artists were not only artists but commonly philosophers and scientists as well. Michelangelo, who was a painter, architect, poet, engineer, and sculptor, exemplified these characteristics. His masterpiece in the Sistine Chapel, The Last Judgment, provides us a great comparison to Cavallini’s work on the same topic and contrasts the vastly different techniques and focuses of the two art periods.

While Cavallini’s work lacks a variety of colours and could be described even as plain, Michelangelo’s work gives a clear view into his mind’s eye, filled with numerous angels and men moving through the heavens. While Jesus is still at the top and the Madonna next to him seems to cower in fear at his wrath, many nonetheless are lifted upward. The bright colours, quick movements, and in fact original nakedness of the characters (later covered up, at the church’s request) reflect the technique and thought process of Renaissance-era art. So taking the topic of the Last Judgment, the second coming of Christ as a comparison subject matter for extrapolation between Medieval and Renaissance art periods, the Renaissance’s brightness, liveliness and energy shine clearly.

First, we saw that Middle Age art was dreary, using drab colours and little dynamism that reflected the harsh realities of life in Europe at the time. Second, Renaissance Art ended this period with the new opportunities and advances made during the Renaissance, reflected in art from the period. Multitalented Renaissance men of the period such as Michelangelo contributed simultaneously to multiple artistic fields at once.

Their art reflected the optimism of the times, the great advances being made philosophically and technologically, and their work captured their excitement for mankind’s newfound humanist relationship with God. What was once seen as an angry God hell-bent on punishment was now an opportunity for a chance into the heavens, and often Renaissance Art was even entirely secular, such as masterpieces like the Mona Lisa. Therefore, the Renaissance period of art departed from the Middle Ages period of Medieval Art not simply in technique or media, but also in subject matter, philosophy, and use. The art periods correspondingly reflected their equivalent time frame as either bleak and dowdy or upbeat and energetic. 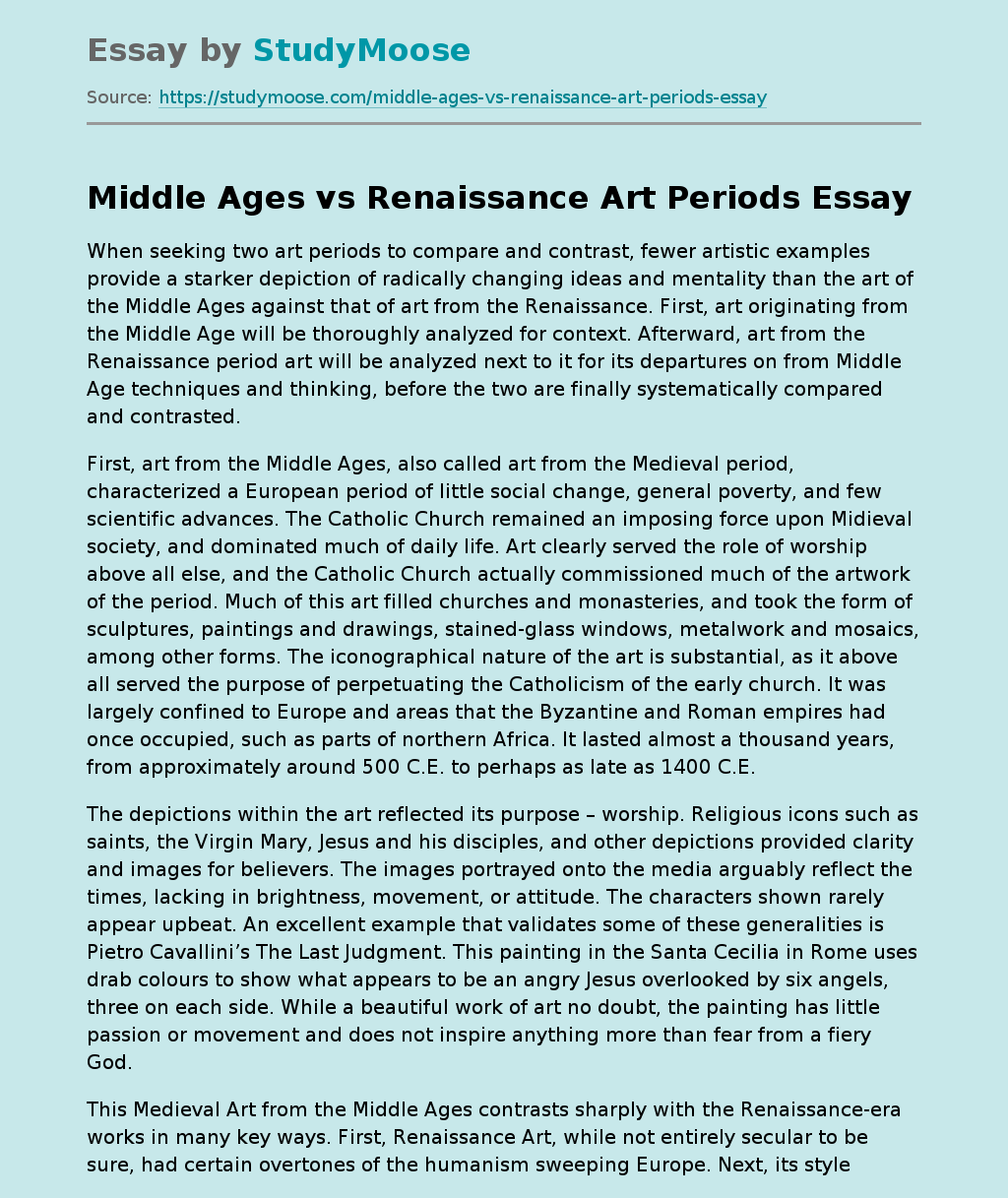