The Middle ages began after the fall of the Roman Empire. It can be defined as a time of minimal cultural and scientific achievements, suffering, feudalism, and power of the church. The labels for the Middle Ages that best describe the era between 500 and 1400 in Europe are the Dark Ages, the Age of Feudalism, and the Age of Faith.

The Middle Ages should be labeled the Dark Ages because of the years of suffering that was inflicted from invasions. Invaders, usually from the North, would come into towns and completely lay waste to everything.

These invasions made people live in fear and abandon their homes in refuge of safer places. In document one, “They sacked town and village and laid waste the fields…there is no longer any trade, only unceasing terror…the people have gone to cower in the depths of the forest or inaccessible regions.” Besides people’s homes being destroyed from invasions, many people were killed and their belongings and even loved ones taken.

In document 3, “842, in this year there was a great slaughter in London and Quentavic and Rochester…843 the Northmen, with their boats filled with booty, including both men and goods, return to their own country.” The Dark Ages has a negative connotation to it, so this label rightly matches the terrible invasions that occurred leaving families devastated.

The Middle Ages should also be labeled the Age of Feudalism because of the absence of imperial authority that was replaced by local political organization known as the feudal system.

The feudal system was based on loyalty and obligations between landlords in their vassals. In exchange for protection and land (fiefs) from the Lord, the vassle gave the Lord his loyalty, military service, and ransom if needed, as shown in the feudal obligations of document 4. After the fall of the Roman Empire, its territories in Europe had to protect themselves from outside invaders.

To do this, these local kingdoms gave land to those willing to send knights in order to protect the kingdom. In Document two John of Toul is a vassle to the count and countess of Champagne and takes the Homage Oath, “I, john of Toul…will send to the Count and Countess of Champagne the knights who is service I owed to them for this fief which I hold.” Without the loyalty and service from the vassals to the landlord, the feudal system would crumble leaving that territory defenseless against invaders and rival kingdoms.

Finally, the Middle Ages should be labeled the age of faith because of the solid organization and power the Catholic Church demonstrated. The power of the church can merely be seen through its cathedrals as shown in document 10. A lot of money, materials, and labor were required to build the cathedral and only a wealthy and powerful organization could build them. The church even tried to limit warfare between landlords by decreeing days of peace when no battles or attacks could occur. In document 5, the Church believes in the word of God and called for the observance of the Truce of God, “on every Sunday, Friday, and Saturday, and on feast days no one may commit murder, arson, robbery, or assault.” Besides power, the Catholic Church had a lot of influence over people. Some people gave up the life they knew to follow God and join a monastic order.

This is evident in document 8, an excerpt adapted from monastic vows taken by a brother that had an ordinary life but gave it up for a life with God. “I renounce my own will for the will of God…I accept all hardships of the monastic life…I promise to remain a monk in this monastery.” The calling of Crusades by the church shows its influence it had over people even in times of war. Pope Urban II was the head of the Catholic Church and he believed it was God’s will to call for a crusade to recapture the holy lands. In document 9, “your brethren of the Middle East are in urgent need of your help…the Turks and Arabs have attacked…they have occupied more and more of the lands of the Christians.” Document 8 shows the church’s religious influence while document 9 shows its political influence.

In conclusion the Dark Ages, the Age of Feudalism, and the Age of Faith are labels that best describes the Middle Ages. The Middle Ages were low on cultural and scientific achievements and lived off of the knowledge from civilizations before them. Document 6, “it performs the function of the knowledge and treasures of what had come before.” Its output of creativity and originality did not in any way surpass the turmoil from invasions, political organization from feudalism, or the power of the church, to be known as a golden age. Document 7, “medieval culture was in perfect, was restricted to a narrow circle of superior minds.” To better understand that the Middle Ages produced a low amount of cultural and scientific achievements I would need an additional document of a list of achievements produced during this era. I would be able to compare this to other achievements produced in civilizations during their Golden Age. 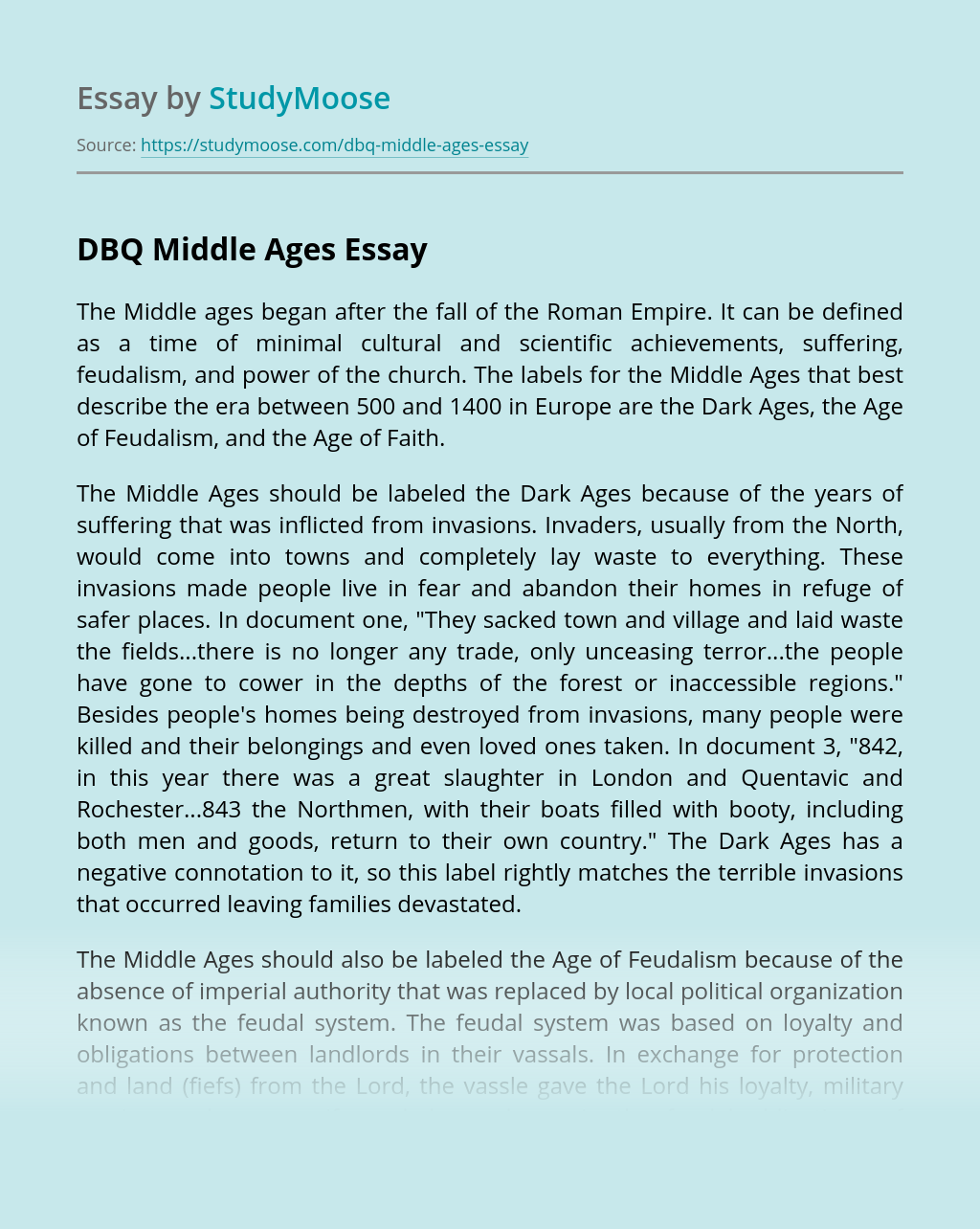