J.R.R. Tolkien’s world told an amazing story and was a huge phenomenon in the world today. Of his stories take place in a world called middle earth. Tolkien was able to create a wonderful world full of different creatures, people, and most importantly, cultures. Tolkien did more than just create new a new world. he was able to create whole new species of intelligent beings. There are many different types of races and beings and creatures in Tolkien’s world middle earth and the whole universe.

Don't use plagiarized sources. Get your custom essay on
“ Races of Middle Earth ”
Get custom paper
NEW! smart matching with writer

He was also able to create new languages. In a newspaper article (2015), Tolkien stated:

(Plimmer, C. A., n. p.) Tolkien was able to expand his universe with new languages and races.

In Tolkien’s book, The Silmarillion, he describes the birth of his world. Eru Iluvatar is the supreme being in the Tolkien universe. Iluvatar can be called God or the great one. Eru Iluvatar was lonely and created other powerful beings called the Ainur. Although Ainur were powerful, none were as powerful as Iluvatar.

The Ainur can be divided into two categories: Valar and Maiar. The Valar are inherently more powerful than the Maiar.

The Ainur all of their own gifts of creation, but they rely on Iluvatar for his guidance in doing so. Iluvatar began to sing a tune so beautiful and all the Ainur participated. There was one Ainur who is the most powerful out of all the Valar who wanted to create things of his own. His name was Melkor.

Melkor wondered deep into the void trying to find the flame of creation which gave Iluvatar his power to create beings. Melkor began to have thoughts of his own that were not from Iluvatar and when he returned he joined the song that Iluvatar and all the other Ainur were singing. He created his own tune and persuaded some Maiar to join him. In creating his own tune he created all the suffering and evil in the world. When it was done Iluvatar said to him:

And thou, Melkor, shalt see that no theme may be played that hath not its uttermost source in me, nor can any alter the music in my despite. For he that attempted this shall prove but mine instrument in the devising of things more wonderful, which he himself hath not imagined. (Tolkien, 1983, p. 3)

Iluvatar told Melkor that he was proud that he was able to create something to add in the song, but all the things he thought originally came from Iluvatar. Melkor was ashamed and angry but he did not go against Iluvatar.

Orcs and goblins are in the world of middle earth. They were created by Melkor when he captured elves and tortured and twisted their mind so they are only able to destroy. Orcs hate everything and everyone including each other. They are shorter than elves and men and have dead dark skin. They have pointed ears, and eyes that can’t see in the light very well. They are savages and are not capable of doing good.

Balrogs are Maiar who were persuaded to join Melkor. They are the most powerful of Melkor servants, even surpassing a dragon. They are unable to reproduce so there number can only go down. They are capable of choosing its shape but is covered in fire and uses a fire whip. A Balrog was shown in Lord of the rings when it was chasing Gandalf and his companions through the mines of Moria.

Even with all the bad evil races serving Melkor, there are some who resist and fight against his servants. The Great Eagles are one of them.

The Great Eagles were created by Manwe king of the Valar to serve as messengers so he can be caught up with the events happening on middle earth. Enright, who is a lord of the rings scholar, revealed, “Eagles are depicted as noble and brave…” (2018, p. 57). The Great Eagles look like ordinary Eagles but are great in size, and are able to think like a regular human being. They are able to speak many languages.

Wizards are Maiar who serve the Valar. Gilson (2018), an expert on the lord of the rings mythology, explained, “The wizards, also called Istari, were originally spirits of the order of the Maiar, the followers of the Valar. These were sent by the Valar to help and assist the peoples of Middle-earth against Sauron…” (n. p.). Wizards are extremely powerful, but the Valar commanded them not to use their full power or else they will not be allowed to return to them. There are 5 wizards who were sent to middle earth. One was named Saruman the white, who was the wisest of the five wizards.

Another was named Radagast the brown, who loved nature more than anything. The other to wizards are known as the blue wizards named Alatar and Pallando. Not much is known about them but it is rumored that they went to the east and started cults of magic. The final wizard is known as Gandalf the Grey and later Gandalf the white, He was the most humble of all the wizard’s and the only wizard to stay true to the mission that was given to them. The Wizards chose the form of old men because they thought it would show there wiseness and make them more influential. Their main mission was to guide the men of middle earth and to fight against the evil taking place on middle earth.

Dwarves are the most stubborn of the three peoples of middle earth. Dwarves were created by Aule the smith who is a Valar. Aule created the dwarves because he became impatient for waiting for Iluvatar children to arrive, and wanted to teach someone his skills of crafting. That made Iluvatar angry and he almost destroyed Aule’s creation, but Aule begged Iluvatar that they can be spared. Iluvatar listened but commanded Aule to put them to sleep until his first children arrive. Dwarves are shorter than men and elves and have long beards that they are proud of. They have great endurance and are extremely fast and strong. Dwarves are able to live up to 250 years and are extremely resistant to diseases. They have a love of mining and show this love by living inside mountains so they can continue to mine.

Elves are considered the first children of Iluvatar and loved by the Valar. They are immortal which means if they die there souls are trapped in middle earth. They are extremely attuned to nature so they like to keep things the same. They are considered the wisest of the three peoples of middle earth due to their immortality. They are as tall as men but are fast and have a special skill of being light on their feet, which results them being able to walk on snow without sinking into it.

The race of man is Iluvitars favorite children and he showed them this by giving man the gift of mortality so they can return to him when they die. Due to there shorter lives, they are able to focus on the task at hand and are considered the get things done race. They look just like people today. There was one race of man that was able to live up to 300 years due to their services to the Valar, but in general, they only live on average 80 years. The race of Man could choose to be good or bad. Man is easily corruptible, so many times they turn on each other.

Hobbits are a race shorter than dwarves but are surprisingly not related to them at all. Though the only thing said about hobbits is that they are a subspecies of men. Hobbits are short and have curly hair and hairy big feet. They are oftentimes fat because of their love for eating. Hobbits have nothing to do with the world. They like doing the same thing every day and do not like adventures.

In Tolkien’s middle earth he was able to create so many races that are still used today. There are so many different types of races not mentioned because it would take many pages to talk about them all. Every race had a purpose on middle earth and had a creator which all started with Eru Iluvatar. 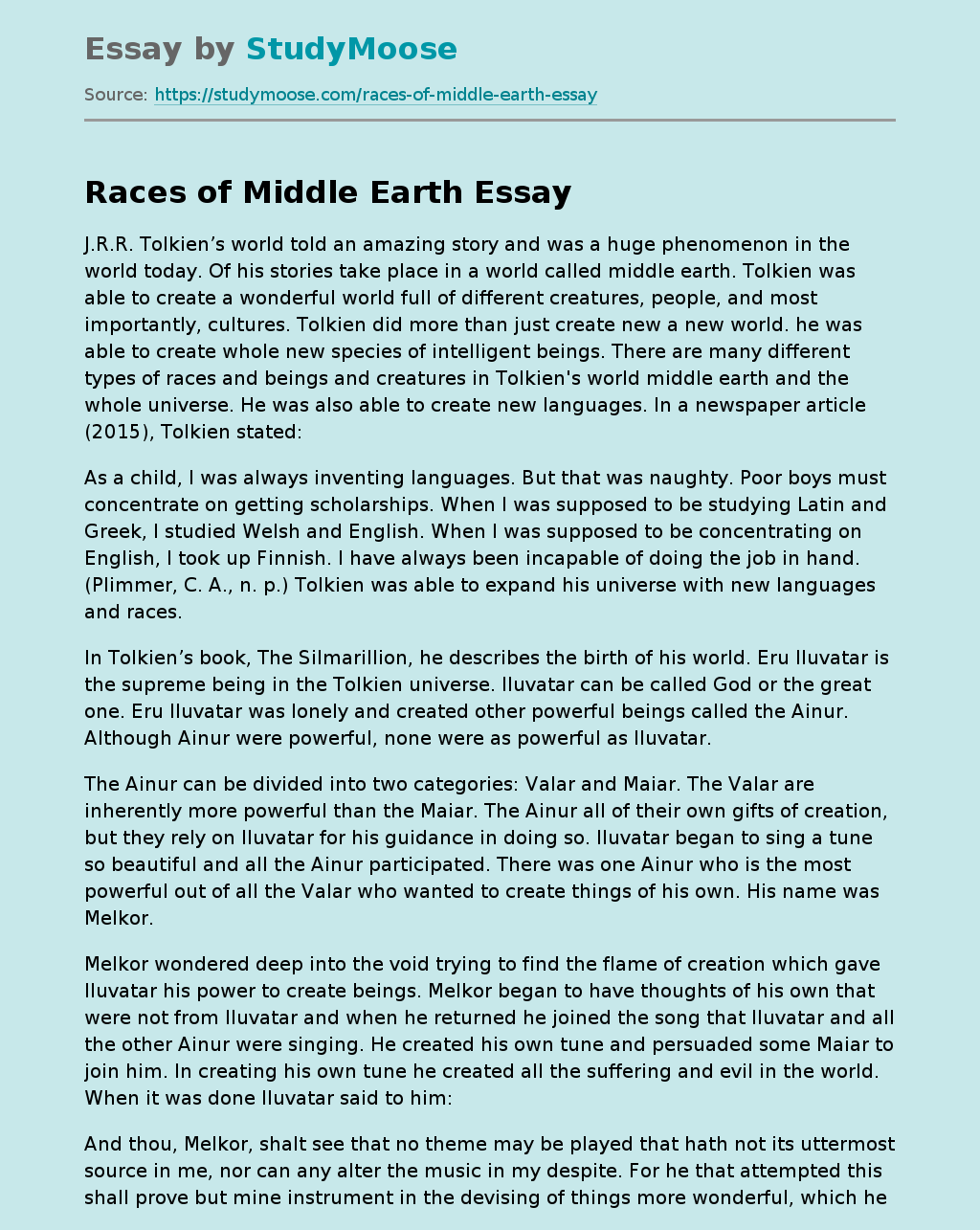