The Hobbit by J.R.R. Tolkien: Bilbo Baggins as a non-typical hero

In J.R.R Tolkien’s The Hobbit, Bilbo Baggins is presented as a hero, however does not posses the stereotypical qualities of this persona. Throughout the novel Bilbo is faced with immense challenges, defying all odds in order to survive. These challenges allow him to gain wisdom and compassion, ultimately helping him achieve status as a hero. However, his clear preference for simple domestic pleasures, over such adventures, is an obvious defiance of a classic hero. In addition, it is made apparent that Mr Baggins does not have strong idealistic morals, and instead prefers to adhere to more conventional ideals, such as that of common courtesy and friendship.

Don't use plagiarized sources. Get your custom essay on
“ The Hobbit by J.R.R. Tolkien: Bilbo Baggins as a non-typical hero ”
Get custom paper
NEW! smart matching with writer

Moreover, Mr Baggins is not overly concerned with the principals of right and wrong, nor does he seek out justice. Furthermore, Bilbo recognises his own weaknesses and is at a constant struggle to overcome the flaws of his character.

Although he does not always overcome his flaws, Bilbo is able to face challenges in order to help others.

Furthermore Bilbo’s reluctance to give into the archetypal persona of a hero proves to be the reason as to why his character is so successful in becoming one. Bilbo Baggins gains wisdom and compassion through the challenges and adventures his is faced with, helping him become a great hero. Bilbo’s character is first presented as weak and inexperienced. He is almost incapable of saving himself and others. “What is the use of a hobbit?” (p146) He seeks out nothing more from life than the comfort of his hobbit hole and a good meal.

Whilst on the adventure, the hobbit routinely wishes to be back in his Hobbit hole. “He fell to thinking of his far-distant hobbit-hole with its beautiful pantries.” (p151) His aspirations appear to be purely domestic. Moreover, Bilbo puts a great deal of importance on his reputation and does not seek out adventure in fear of tainting his name. “People considered him very respectable…. because he never had any adventures or did anything unexpected.” (p1)

However there are several key instances throughout the text that vastly change Bilbo’s character. In particular, this is apparent when he saves both himself and companions from giant spiders. This challenge clearly initiates a change within Bilbo’s character “Somehow the killing of the giant spider made a great difference…he felt a different person, and much fiercer and bolder…”(p152) Furthermore, there is an evident transformation of Bilbo’s character “There is more good in you then you know…some courage and some wisdom, blended in measure.”(p271) This is an obvious contrast to his attitudes during the beginning of the text. Bilbo’s clear gain of wisdom and compassion allow him to become a great hero. Bilbo Baggins is a respectable hobbit, however does not posses the strong morals of a hero, and instead acts upon more ordinary qualities. Bilbo’s companions appear to have a strong outlook of what is right and wrong. This is evident from the noble quest they are on, of reclaiming their homeland. However the Dwarves strong morals ultimately appear to be what lets them down.

Although Bilbo’s beliefs do not coincide with that typical of a hero, ultimately it saves both Bilbo and his companions. “They knew only to well that if for the hobbit, they would soon all have been dead.”(p160) Moreover, Bilbo places a high importance on the quality of friendship, choosing at many points to put his life at risk in order to save his friends. “He made up his mind not to desert his friends”(167) Bilbo is not an idealist; it is not his goal help the Dwarves reclaim their homeland for the greater good. This is simply a consequence of his actions upon saving his friends. Furthermore, it is Bilbo’s acknowledgement that his beliefs are not flawless as well as his ability to place the values of others over his own, which truly makes him a hero. In addition, Bilbo’s appreciation for the more simple qualities of life, make him invaluable to his companions, as they are not possessed by any of the dwarves. “If more of us valued food and cheer above hoarded gold, it would be a merrier world.” (p271)

By not possessing strong morals, Bilbo is able to become a more capable hero. Bilbo is not blind to his own weakness and faces countless challenges throughout the novel in order to help others. At many points during the text Bilbo’ s weaknesses are brought to light, and recognised by him and others. “Don’t be a fool Mr Baggins, if you can help it…”(p116) A small, yet significant weakness appears to be the hobbits dependency on food and material comforts. “We are famished with hunger. I am nearly dead of It…”(p11) He faces this weakness countless times during the novel, and ultimately is able to overcome it. “He felt…much fiercer in spite of an empty stomach.” (p152) Perhaps Bilbo’s most significant weakness is his own fear, which is constant struggle for him to overcome. During the beginning of the text Bilbo is not capable of overcoming this weakness. However, as his character changes and grows he is able to conquer his fear. This is evident when he enters the Dragons lair by himself, “He fought the real battle in the tunnel alone, before he saw the vast danger that lay in wait.”(p205) Although clearly afraid, the Hobbit recognises this weakness and overcomes it, in order to help his companions. This clearly altruistic act makes the Hobbit a true hero, as he is willing to put others before himself, even in the face of great danger.

Bilbo Baggins does not conform to the typical characteristics of a hero, but is in fact a better hero in spite of it. As Bilbo is presented to us as a weak character his accomplishments appear that much greater, making him more of a remarkable hero. Moreover, Mr Baggins faced almost insurmountable challenges, yet he was able to overcome these, gaining wisdom and compassion as a result. Additionally, Bilbo’s lack of a strong moral compass proved to be an invaluable quality aiding him as a hero. This untraditional aspect to Bilbo’s character is paramount in making him a more realistic and interesting Hero. Furthermore, Bilbo’s ability to recognise his own weakness and overcome his flaws in order to help others, makes him a great hero. It is Bilbo’s modest attitude and appreciation for the more common aspects in life that make him a unique yet powerful hero.

The Hobbit by J.R.R. Tolkien: Bilbo Baggins as a non-typical hero. (2016, Mar 19). Retrieved from https://studymoose.com/the-hobbit-by-j-r-r-tolkien-bilbo-baggins-as-a-non-typical-hero-essay 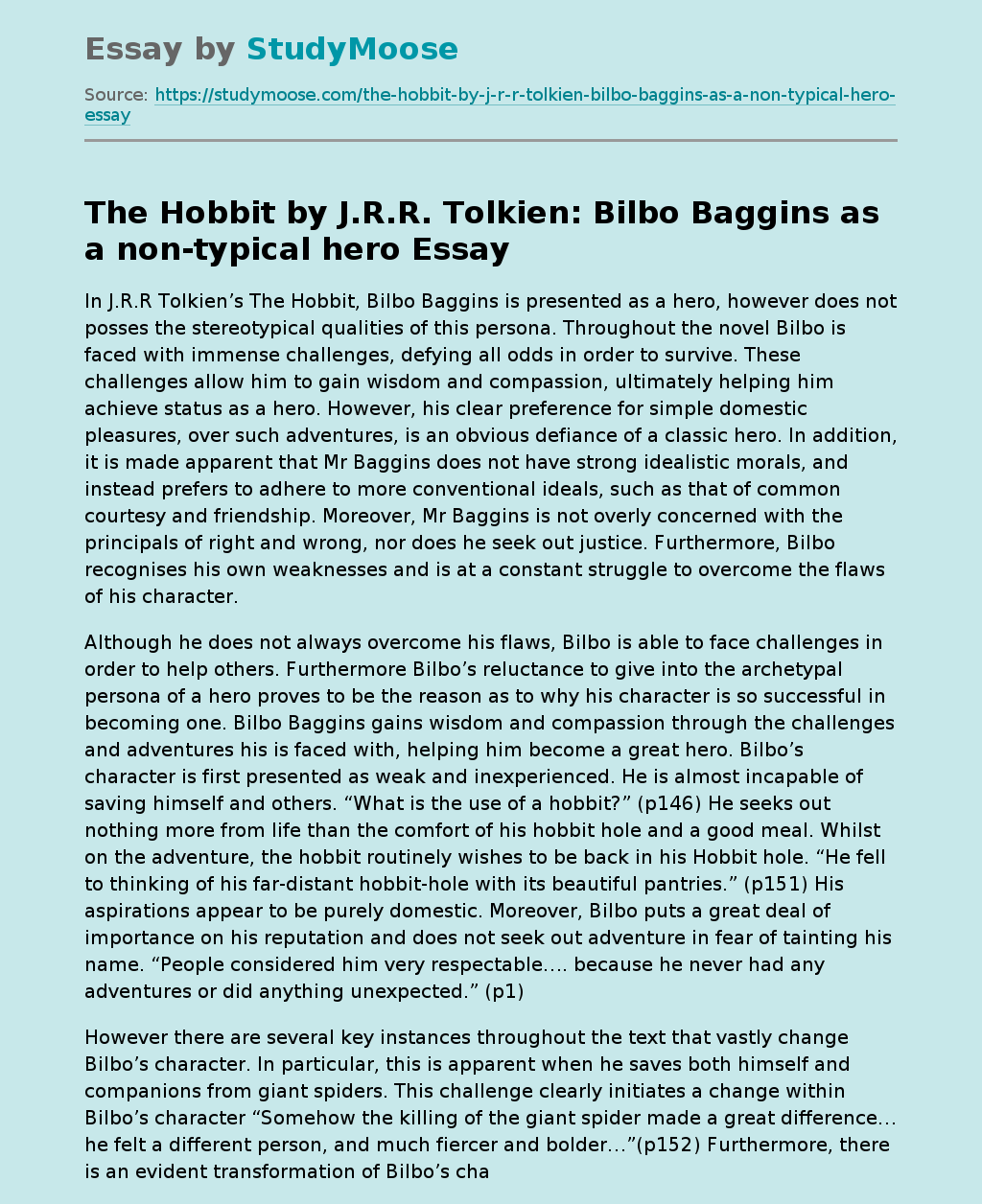