How Bilbo Baggins Changed to Become a Hero?

In J.R.R. Tolkien’s, The Hobbit, the heroic nature of Bilbo Baggins is depicted through his actions in each mental and physical challenge. His mental challenges in learning about himself, what he is capable of achieving, and being a faithful leader in times of crisis, the physical challenges of fighting off spiders, goblins, and Wood-elves. The hero of the novel is witnessed from being a modest and timid hobbit to a clever and respected leader. Even though he didn’t start off as an extraordinary hero, he was slowly turning into one.

Turn in your highest-quality paper
Get a qualified writer to help you with
“ How Bilbo Baggins Changed to Become a Hero? ”
Get high-quality paper
NEW! AI matching with writer

Bilbo’s growing valor is shown with his riddle fight with Gollum.

“Straight over Gollum’s head he jumped, seven feet forward and three feet in the air.” This proves that Bilbo is willing to take risks and have the skill to jump that high takes true grit. Also in this chapter, he becomes more verbally heroic, for example: “ ‘ Come on!’ said Bilbo. ‘I am waiting!’ He tried to sound bold and cheerful, but he did not feel at all sure how the game was going to end, whether Gollum guessed right or not.

” Although Bilbo puts up a tough front by trying to sound brave and bold, he is still pretty weak inside, doubting his own abilities. However, this will change dramatically throughout the novel. Another way he has shown heroic qualities is when he had to save the dwarves from the elves.

“ ‘No time now!’ said the hobbit. ‘You just follow me! We must all keep together and not risk getting separated.

All of us must escape or none, and its our last chance. His commanding words reflect off as a respected leader. When he said ‘all of us must escape or none’ it means he’s willing to leave no man behind, spoken like a true army general. In the same chapter, Bilbo showed greater heroism, “Bilbo did his best to find straw and other stuff to pack them in cozily as could be managed in a short time.”

This proves that Bilbo cares about his friends and would suffer more himself for the comfort of other. Not only was it because he was the one who wanted them to go into uncomfortable barrels, he tried to make up for it the best he can, it was also because he felt that he was the ‘leader of the pack’ now and that he had the responsibility, the type of responsibility that only a hero would feel. When Bilbo was faced with a huge fear – Smaug, he was at first a little reluctant but confronted it anyways. “ Now I will make you an offer, I have got my ring and will creep down this very noon.

Then if veer Smaug ought to be napping – and see what he is up to.” This shows that even if he wasn’t enthusiastic about it, he still gave it a try. Coming from a tiny hobbit hole, eating cakes and drinking tea, it was very challenging for Bilbo to face a frightening, fire-breathing dragon. In chapter 16, ‘ A Thief in the Night’, Bilbo’s growing heroism is shown with the giving of the Arkenstone. Independent moral judgment is displayed when Bilbo goes against his true friend, Thorin.

“ Then Bilbo, not without a shudder, not without a glance of longing, handed the marvelous stone to Bard,” This shows that he is willing to give up anything, even the amazing Arkenstone and the friendship with Thorin, to do what’s right. Although he did want to keep their friendship and the Arkenstone at first, he is not materialistic and greedy and gave it to Bard. A hobbit that possesses this type of generosity can be called a hero. I think this novel is actually about the formation of Bilbo Baggins from comfort-loving Hobbit into a fully-fledged hero at the end of the novel.

Therefore he doesn’t start off as a hero but certainly as his character develops by the incidents that he faces he shows himself to be truly heroic, especially in contrast to other “heroic” characters.

How Bilbo Baggins Changed to Become a Hero?. (2016, May 21). Retrieved from https://studymoose.com/how-bilbo-baggins-changed-to-become-a-hero-essay 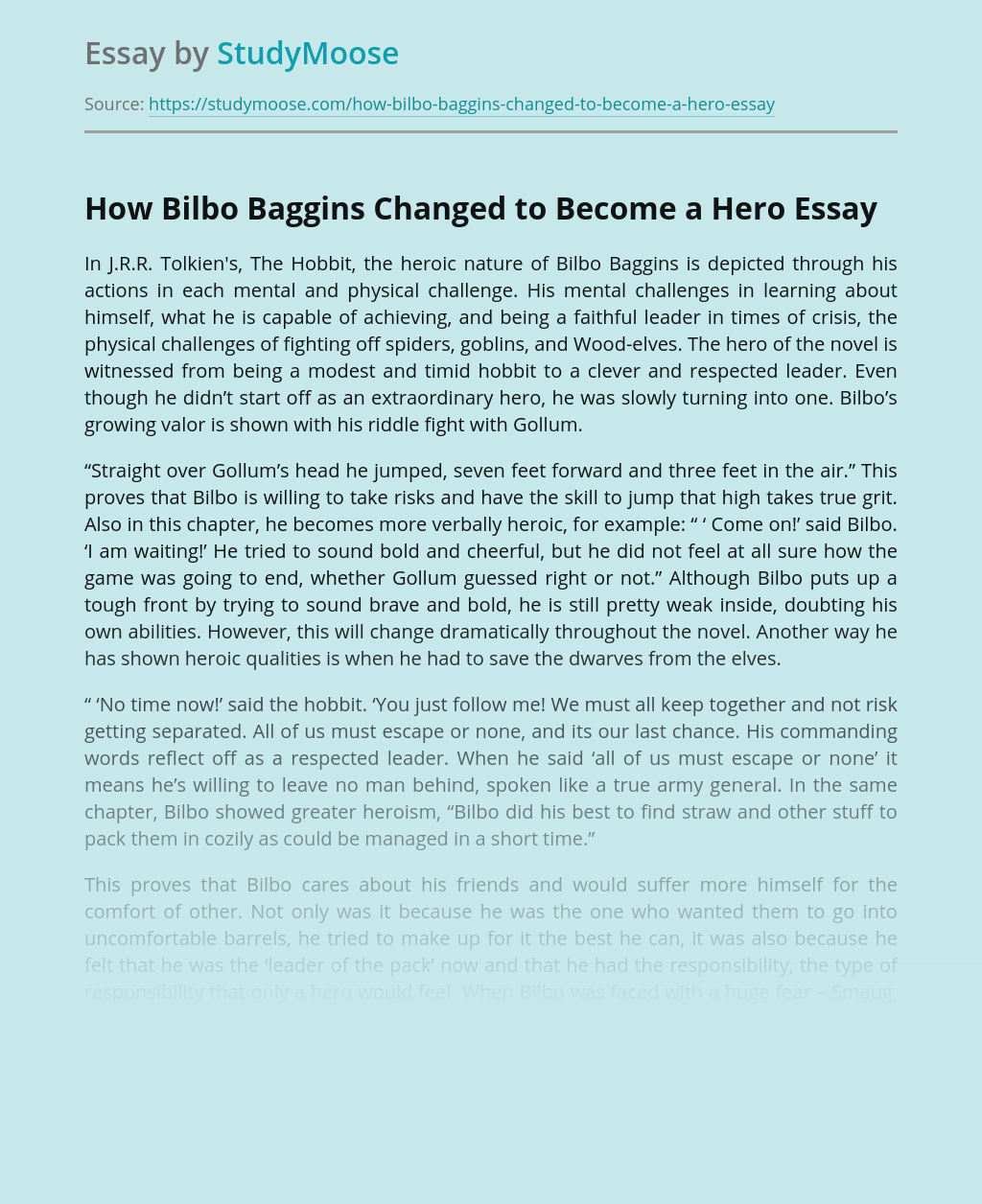 Turn in your highest-quality paper
Get a qualified writer to help you with
“ How Bilbo Baggins Changed to Become a Hero? ”
Get high-quality paper
Helping students since 2015
Stay Safe, Stay Original