Epic Hero Comparison(Beowulf and The hobbit)

Don't use plagiarized sources. Get your custom essay on
“ Epic Hero Comparison(Beowulf and The hobbit) ”
Get custom paper
NEW! smart matching with writer

He kills Grendel, Grendel’s mother, and the dragon all of which are heroic deeds that no one else was able or willing to take on. The foes that Beowulf fought were all beyond human strength and capabilities and required superhuman abilities to bring down. In Bilbo’s case he takes down the spider by himself and tries to face up to challenges that he would normally never have done in his comfortable hobbit home. This shows a hero putting the need of the many against the need of the few.

The heroic tradition in literature has definitely moved from epic heroes, the creation of larger-than-life characters that had legendary strength and physical characteristics, to the move towards anti-heroes, which particularly developed in the 20th and 21st centuries, with the focus on leading protagonists who lack certain heroic qualities such as idealism courage and generosity. In both stories, the concept of vengeance is the first to appear.

In Beowulf, vengeance is what drives the entire plot of the poem, as one action is carried out in response to a former action – to seek vengeance for a prior wrong.

It is Beowulf, introduced as a strong, powerful character from the start, whose own heroic code compels him to seek vengeance against Grendel for deeds the monster committed against Hrothgar. Beowulf himself is an epic hero who even before arriving at Herot has already built for himself a tremendous reputation that goes before him and is based on acts that no mere mortal could accomplish or achieve.

He arrives at Herot as a fully formed character. When considering Beowulf as a character, it is clear that his exploits and fame confirm his as a character whose strength is certainly out of this world, and more powerful than any other character alive today. This shows he is definitely a hero in the epic hero tradition. Bilbo by contrast starts the novel as a quiet, peaceful and unadventurous hobbit that sometimes goes through periods where he wonders what on earth he is doing on this adventure with dwarves and a wizard. Bilbo is called upon to do more than he imagines himself capable of.

He does not like to travel, preferring the safety of his hobbit-hole, but he has inherited a streak of adventurousness from his mother’s side, the Tooks. His adventurous Took side and his comfort-loving Baggins side are in conflict throughout much of the story. It is clear from his early attempts to sneak up on enemies, such as with the trolls that he has a lot to learn and his early failures show that he is much more of a dynamic character than Beowulf is in the way that he learns heroism and courage and refines his skills as time goes by.

Near the beginning of their journey, Bilbo was quite vulnerable to the dangers and was frequently rescued by the others. As the adventure continues and Bilbo shows his worth and value first in the Misty Mountains and then secondly with the Elves and then finally the spiders, Bilbo becomes a hero in his own right. As he progressed through the quest, he went on his own little adventures which helped him become braver and wiser. Bilbo willingly forfeits his own claim to the treasure in order to secure peace.

Bilbo shows himself to not just be a hero in terms of his skills and qualities but a hero in his character as well which is something arguably that Beowulf does not show as he seems to risk his own life against the dragon knowing that his death would be disastrous for his own people. Finally, his heroic status is secured when he delivers the Arkenstone of Thrain to the Elvenking and Bard in order to secure a peace between the dwarves and the elves and humans.

Epic Hero Comparison(Beowulf and The hobbit). (2016, Jul 30). Retrieved from https://studymoose.com/epic-hero-comparisonbeowulf-and-the-hobbit-essay 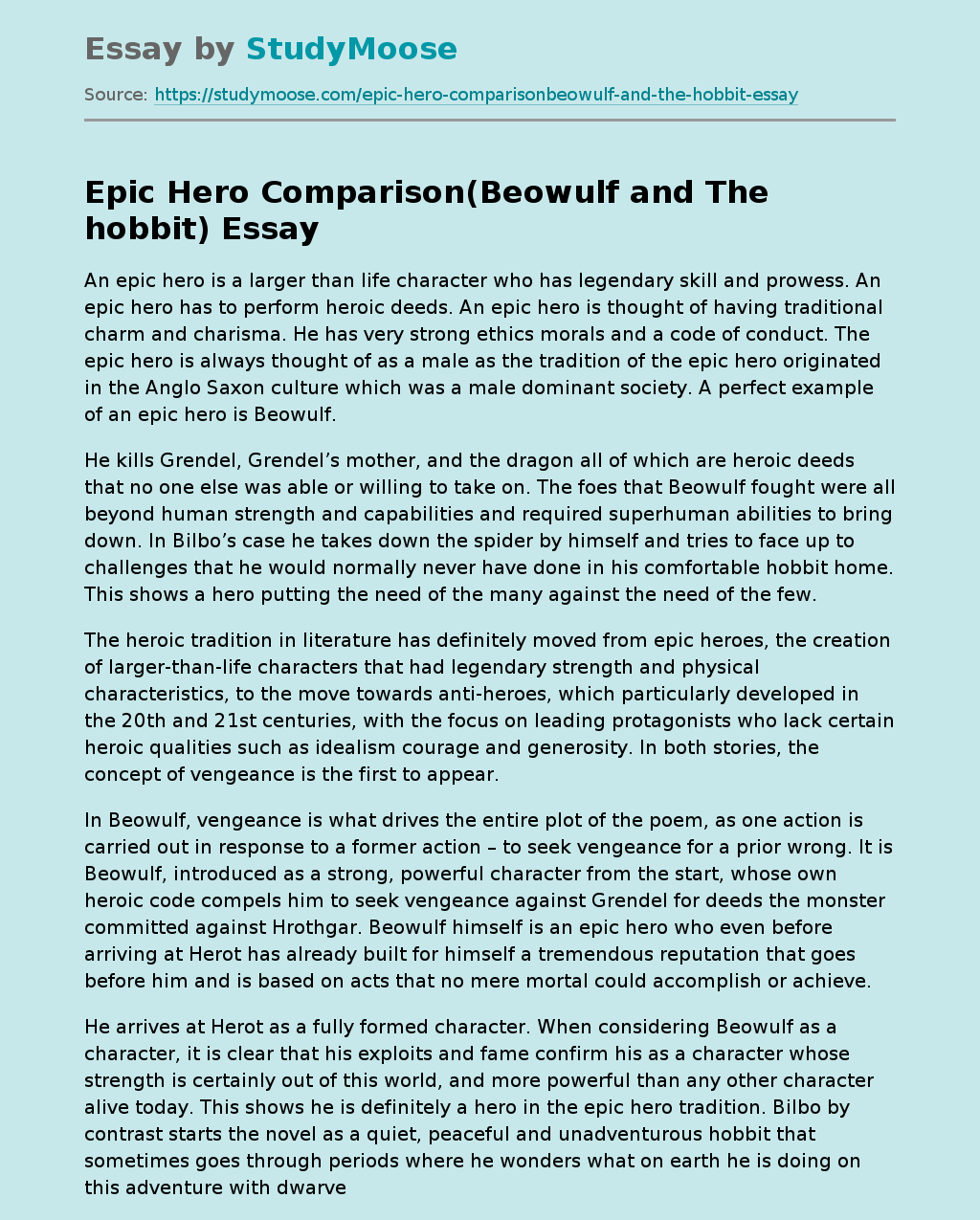