“I resolved when I set out on the sea, sat down in the sea- boat with my band of men, which should altogether fulfill the will of your people or else fall in slaughter, fast in the foe’s grasp. I shall achieve a deed of manly courage or else have lived to see in this mead-hall my ending day” (Garcia) Beowulf was from a far away world to seek the challenges with the beasts and show his great courage and speaks as an epic hero.

Don't use plagiarized sources. Get your custom essay on
“ Beowulf: An Epic Hero ”
Get custom paper
NEW! smart matching with writer

Beowulf announces his name and shows his glory and invoking the reputation he has for himself through his great deeds. “The man whose name was known for courage the Great leader, resolute in his helmet, answered in return: “We are retainers from Hygelac’s band. Beowulf is my name.” (340-343) Beowulf sails from the seas and to meet King Hrothgar and to display his honor and glory to fight the beast, Grendel. Beowulf makes his battle with Grendel by announcing it will be a hand-to-hand combat as he gains extra glory for himself.

“I have heard moreover that the monster scorns in his reckless way to use weapons; therefore, to heighten Hygelac’s fame and gladden his hear, I hereby renounce sword and the shelter of the broad shield, the heavy war- board: hand to hand is how it will be, a life and death fight with the fiend “ (433-440) How strong does a medieval epic hero have to be? Strong enough to rip a demon’s arm out of its socket and use of no weapon.

“The monster’s whole body was in pain, a tremendous wound appeared on his shoulder. Sinews split and the bone- lapping burst. Beowulf was granted the glory of winning; Grendel was driven under the fen-banks, fatally hurt, to his desolate lair.” (814-820)

The only battle Beowulf uses a weapon to defeat the dragon; its because the dragon has its own special advantages, venom and breathing fire. He is demonstrating his own strength, bravery and prowess, not just using better weapons. “I’d would rather not use a weapon if I knew another way to grapple with the dragon and make good my boast as I did against Grendel in days gone by. But I shall be meeting molten venom in the fire he breathes, so I go forth in mail-shirt and a shield.” (2518-2534)

Beowulf the epic hero is one who places himself at risk for another by performing great deeds of courage he has. He is looked up to by many of his strength, leadership, and success. With the strength of thirty men in one arm, the courage to fight monsters, and the knowledge to respect and consider others’ feelings, Beowulf is the epic hero of that time. 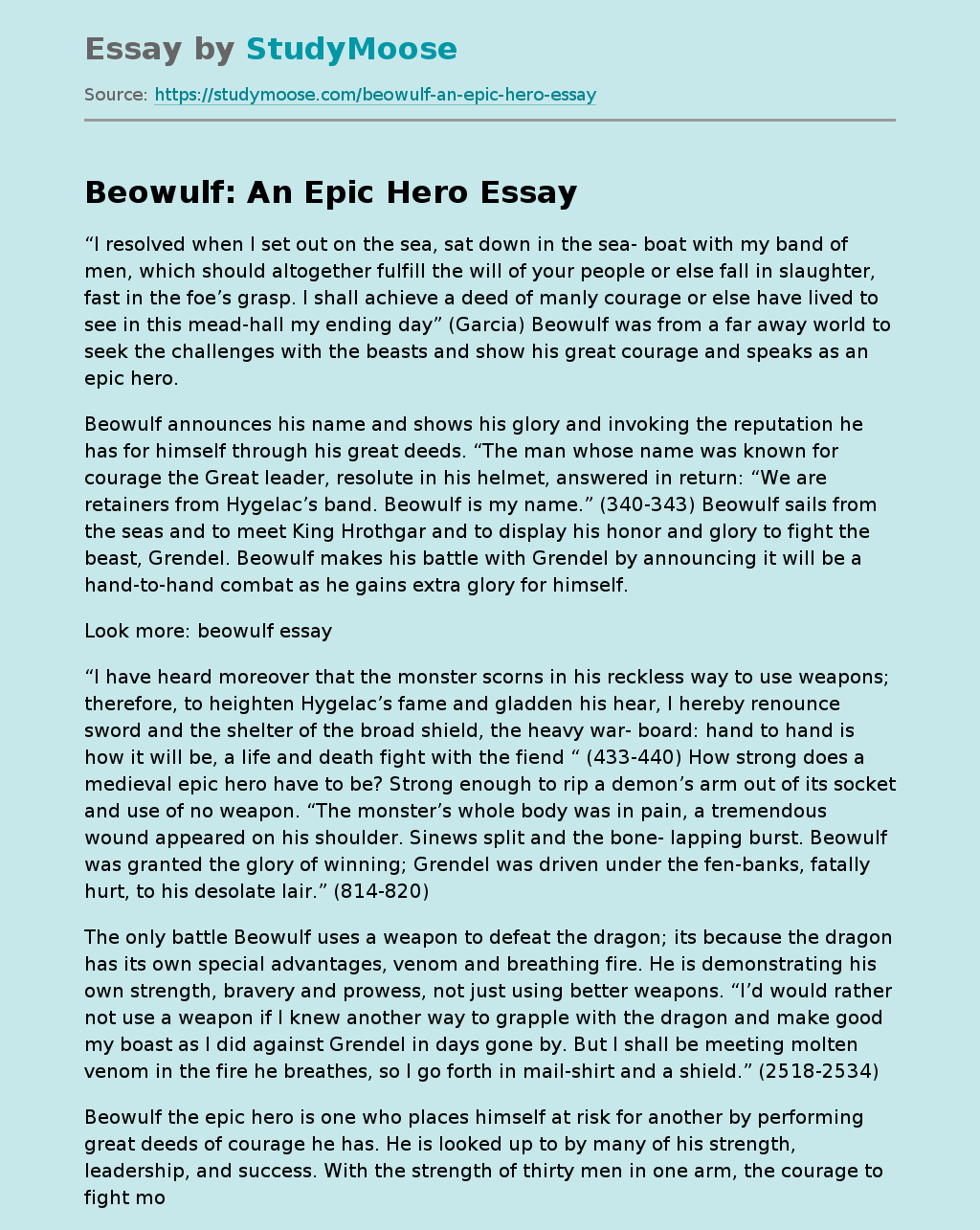