King Hrothgar and his Danish army celebrated their victory in battles in a lavish hall called Heorot. Grendel is angered by the celebration and killed thirty soldiers while sleeping in the hall. For more than a decade, the King could not stop the monster. Beowulf, prince of Geats, arrived in the kingdom one day and helped Hrothgar’s army fight Grendel in exchange for treasures. In a battle that ensued one night, Beowulf defeated Grendel. Unknown to the warriors, Grendel’s mother plotted a revenge for the death of her son.

Don't use plagiarized sources. Get your custom essay on
“ King Hrothgar and Danish Army ”
Get custom paper
NEW! smart matching with writer

Beowulf went to the lair of Grendel’s mother after requesting from the king that the treasures, in case he was not able return, be given to King Hygelac, his uncle. Eventually, Beowulf was able to defeat Grendel’s mother and was able to return alive. Beowulf and his soldiers returned home, and after a few years he was king of the Geats.

One day a thief stole a treasure from the dragon in a cave. Angered, the dragon went to town and burned the houses one night. Beowulf decided to avenge his people by going to the cave and killing the dragon.

Beowulf, despite his old age, was able to defeat the dragon and take the treasure although he was deeply wounded. In the end, Beowulf died from the battle wounds and was buried together with the treasures in a tomb. Part 2 What religious or quasi-religious traditions might the work’s story, characters, elements, or objects be compared to or affiliated with? Why? a.

Grendel is considered to be the symbol of all things evil. Beowulf’s defeat of Grendel and Grendel’s mother signify that good will always conquer evil in conjunction with pagan and Christian beliefs about good and evil.

Beowulf has superhuman characteristics such as his great strength. Similarly, Jesus Christ also had superhuman or supernatural characteristics as elaborated throughout the text of the Holy Bible. Like Beowulf, Jesus Christ also had several encounters with things that are evil in his lifetime. For instance, there was a time when Christ was put into the test by the devil guised as a snake in the desert. After several tests, Christ was able to surpass the tests set forth by the devil which, in essence, signifies the idea that good always triumphs over evil in the end.

Beowulf, on the other hand, had at least three encounters with the evil: the dragon, Grendel and Grendel’s mother. c. Beowulf’s quest for victory and the treasures that go with his victories signify the pagan preoccupation with material things in the world. Even death cannot separate Beowulf from his possession as exemplified in the scene where he was buried along with his treasures from his battles. Christianity, on the other hand, favors the life that is more focused on the spiritual aspect rather on the material aspect. Here we see a stark contrast between the pagan and Christian attitude towards life, death and physical possessions.

The idea that Beowulf was buried in a barrow or a burial mound near the sea after being burned into ashes signifies that the people were following Norse pagan beliefs. It was believed that the fire transferred the deceased to Valhalla or the hall of the slain in Asgard, a city in Norse mythology. e. In the Book of Revelation chapter 28 verse 1, a lake is described as a body of water that “burns with fire and brimstone which is the second death. ” This can be aptly similar to the home of Grendel and Grendel’s mother which is the lake that also burns with fire. 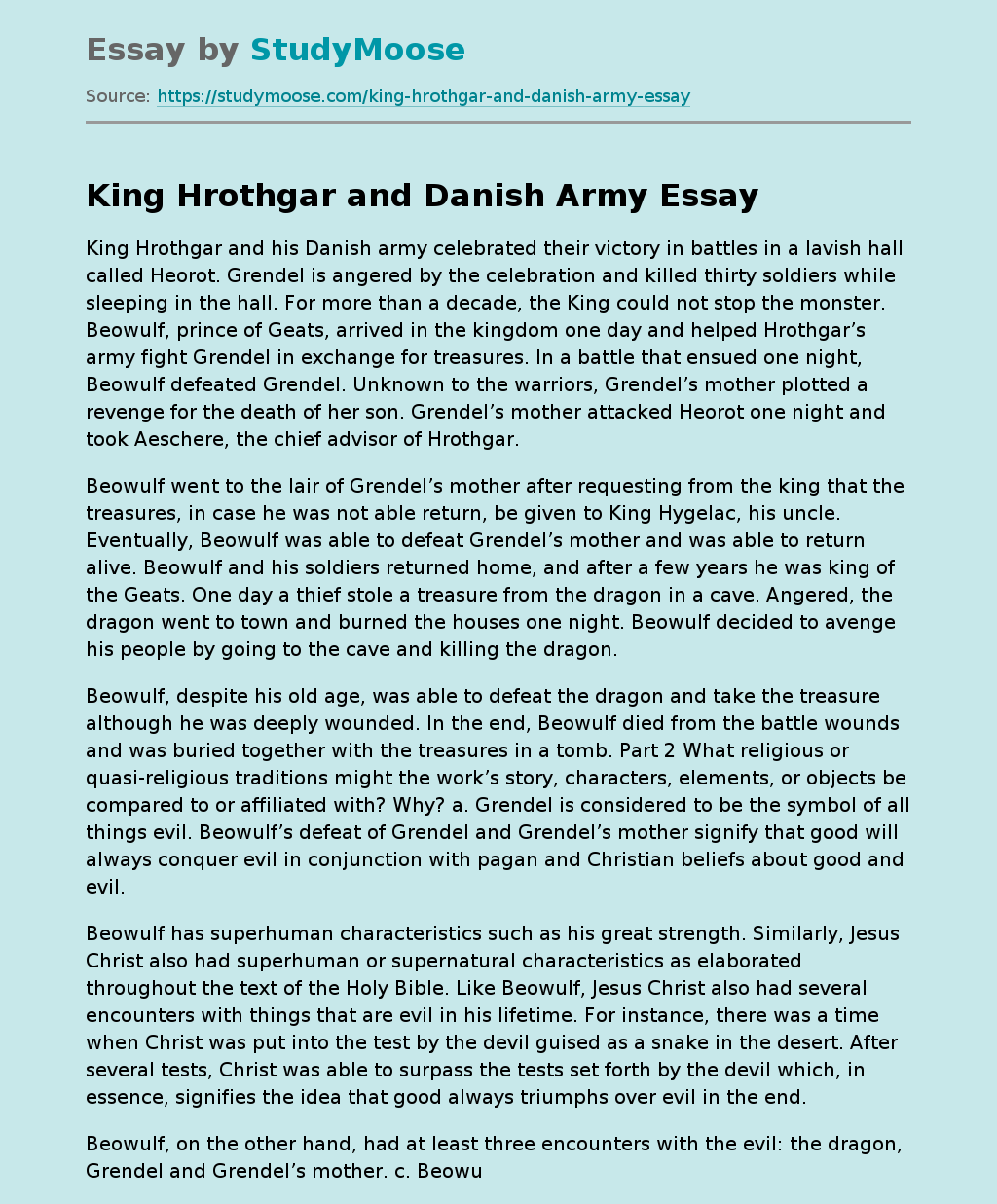