Mentor and Mentee Relationships in the Army

Don't use plagiarized sources. Get your custom essay on
“ Mentor and Mentee Relationships in the Army ”
Get custom paper
NEW! smart matching with writer

This is important, because in the Army, this violates the Army’s rules of fraternization. Having someone use and abuse the mentor and mentee relationships could also lead to quid pro quo. That’s why, during this paper, I’m going to discuss what is a mentor, what is a mentee, how having a mentor affects your unit, and why the Army uses mentorship and how it affects the Army as a whole.

So, what is a mentor in the Army? “Mentorship is the voluntary developmental relationship that exists between a person of greater experience and a person of lesser experience that is characterized by mutual trust and respect (AR 600-100, April 2017)”. A mentor provides the advice to the mentee and counsels them from time to time to ensure they know what they have done, what they need to do to progress, and how to achieve those next set of goals in a certain amount of time.

A mentor mostly will not engage an individual to take under their wing, but in some cases where an individual sees someone that looks like the type of person that will follow their guidelines and execute those guidelines within a timely manner, that person will mostly likely take on that mentor position. A mentor is someone who has a great amount of experience, when dealing with a certain thing. A mentor can also be a peer that you feel knows more on a certain thing then you do. A mentor should be able to affect your personal life and your professional development throughout your career. Mentorship is highly used in the Army, because of how effective it is. “Mentorship helps the Army maintain a highly competent set of leaders (FM 6-22, June 2015)”. Getting a mentor who is serious and highly skilled about their job, will reflect on a mentee who is also serious about learning, rather than a mentee, who is trying to grasp the knowledge from someone who has less or equal skill as they do.

What is a mentee? A mentee is a “Person who is advised, trained, or counseled by a mentor (En.OxfordDictionaries.com, December 2018)”. Picking a mentor is crucial, because not everyone follows directives all the same way. If someone teaches a certain way, a Soldier might not be able to learn that one specific way, therefore that Soldier must ask someone else to teach them, but in a different way to grasp the knowledge that’s being put out. Also, trying to find someone who is willing to put forth the effort in teaching you, guiding you, and following up with you on everything through your personal and professional career, is super essential. So, picking a mentor is important towards you and your career.
Mentorship in the Army is used all the time, well it is supposed to be.

A Squad Leader is supposed to be that mentor for their Soldiers, a Platoon Sergeant is supposed to be a mentor for their Team Leaders, and so on and so forth, to help guide that Soldier for the next responsibility in rank. Also, a Team Leader can be a mentor for their Soldiers as well. A Team Leader is a direct line to that Soldier and ensures that the Soldier does everything right, within the guidelines that are put out and set forth by whatever the commander’s intent is. A team leader is also supposed to evaluate their Soldiers and ensure that whatever that certain Soldier is lacking or progressing in, is noted on their monthly counseling. Mentoring a Soldier is important to a unit, because it ensures that all Soldiers are doing the right thing and staying motivated to keep that stewardship in that profession alive. This ensures that the unit keeps growing, fulfilling all the necessities to keep the unit moving forward, and completing all tasks that are brought down from higher, to help the Army move forward.

The Army uses mentorship to succeed. Let me elaborate more on this one specific subject. So, being brought into the Army, mentorship is started from the basic training and AIT (Advanced Individual Training) Drill Sergeants and Cadre that help educate and professionally develop the new recruits. Upon entry, Drill Sergeants instill the seven army values into the Soldier, which is what will help them succeed in the Army. Now when a Soldier first gets to their unit, mentorship is immediately starting again. From learning anything and everything that the Soldier can from their Team Leaders, or Squad Leaders, they are molded into what is being taught to them and how they are mentored physically and emotionally. This is the most crucial part in the Army, because however the Soldier is molded from their mentorship, they will now instill everything that they have learned into the next few generations of Soldiers that they will mentor in the future.

Mentorship is also a crucial part in the Army, because when a Solider finally achieves the rank of SFC (Sergeant First Class / E-7) and is put into a Platoon Sergeant position, they are not only mentors for their Team Leaders and maybe Squad Leaders, but a mentor for their Platoon Leader, who is new in the Army and doesn’t know how to run a platoon. That Platoon Leader will mostly ask the Platoon Sergeant for guidance, as well as ask his/her Squad Leaders as well. When a Soldier then achieves those next set of ranks that relate to working with someone who is in a commanding position, there’s always going to be a mentorship role between the two. This method that is done so very well, throughout the Army, which is why the Army is successful today.

I think the Army should still follow the mentorship program that they have and never lose it, but I also think that the lower echelons of force, should really take the time to mentor their Soldiers and really look into their Soldiers professional development in their careers, because believe it or not, they are the ones shaping the Army’s future. With that being said, I believe the Army’s mentor and mentee program is a great foundation to help the lower enlisted and lower grade officers, to grasp the concepts of their job and how to apply their skills throughout their career. Doing so, really helps the Army and should always be enforced.

Mentor and Mentee Relationships in the Army. (2020, Sep 13). Retrieved from https://studymoose.com/mentor-and-mentee-relationships-in-the-army-essay 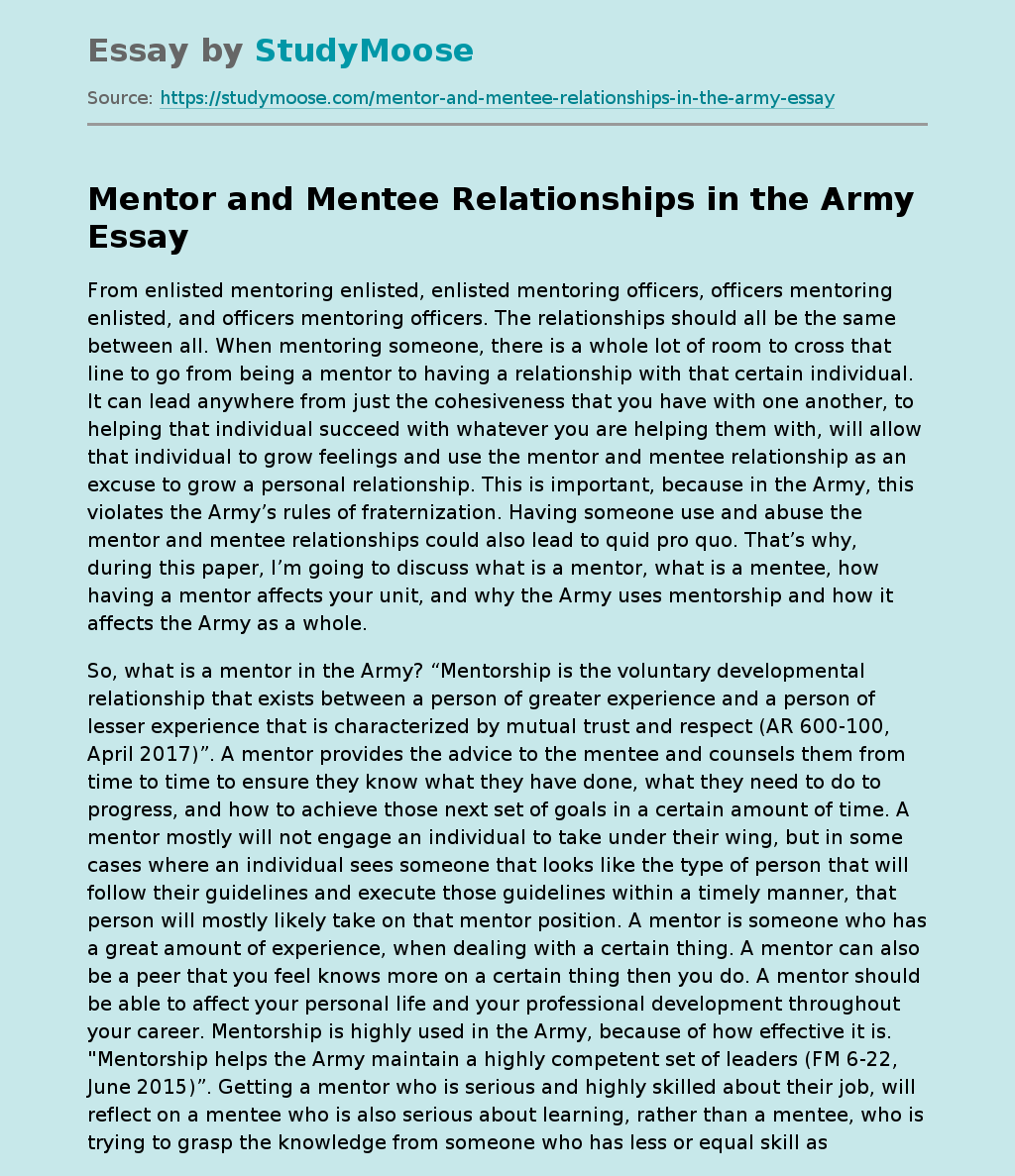