My Mentor and Best Friend

Ko Byung-Soo was my mentor and my best friend. The first place I met him was the Korean Army. He taught me many things and helped me in many ways when I couldn’t adapt to a new place. He was one of the squad members I belonged to. When I first saw him, he looked kind. He was about 5.5 feet tall and chubby, and his face was oval, and his eyes were big and round. However, he was tough and hot-tempered, unlike the way he looked.

Don't use plagiarized sources. Get your custom essay on
“ My Mentor and Best Friend ”
Get custom paper
NEW! smart matching with writer

Our unit’s mission was to target the North’s main contingent with howitzer cannons. Therefore, I needed to know more about the cannon, so Byung-Soo took me to the spot where the cannon was and taught me about cannon. Somebody screamed when I was looking at the cannon. Byung-Soo hung a squad member on the cannon’s barrel. The oiled cannon looked very slippery. The squad member’s hands and feet were trembling as he held onto the oiled barrel.

Byung-Soo’s forehead was covered with perspiration and his face had a faint smile. Squad member could only come down after hanging in the air for five minutes.

But to my surprise, he was also a very sincere person. He sometimes played dangerous pranks on us, but he never pawns his work off on us. He took the lead in what the Sergeants asked us to do. He did all the works in the unit, carrying stones, painting the barracks, utility works. Also, he took good care of his squad. When the squad member was in trouble with the other squad members, he always rushed in like a wild dog with red eyes and took our side. Once when I was working under orders from another squad, he came and fought over why he made me work for them.

Two months after I was transferred to the unit, I had my first live-fire training. I loaded a lot of equipment into the truck, for example, pickaxe, shovel, hammer, log, and large iron bars to hold the cannon. We sat right next to the equipment. Whenever we passed the winding rough road, we and the equipment bounced up. A little while later, when there was a person who slept on the truck, Byung-Soo woke the person up with a loud voice. After passing the long rough road, we arrived muddy training ground. As soon as we arrived, we dug a hole. We dug holes to hold the cannon. However, digging holes in the ground was not easy because of mud and stones. Every time a shovel and pickaxe hit a stone, sparks splashed. We dug a hole for an hour. Finally, we buried the back of the cannon in a hole and fixed the cannon with big iron bars. When a big iron bar was not stuck under the ground, Byung-Soo grabbed it with both hands and another squad member began hammering it down. At that moment, I heard his scream. He was shivering and holding his thumbs. His thumb was completely crushed by a hammer. A white fibrous thing came out through his skin. It was white, but it wasn’t bone. Because it looked soft and intertwined, like a spider’s web. His fingernails were broken into so many pieces that it was hard to recognize. He could not scream, and his body was shaking because of his pain. His face became red more and more, and tears flowed from his eyes. It was as if it was hard to breathe because of the pain. He was surrounded by many people, but there was no first aid, just watching. A few minutes later, an ambulance came and took him. Even if one person was seriously injured, the training was not ceased. We were panicked because Byung-Soo was the most experienced and excellent soldier of all. Especially, the soldier who crushed Byung-Soo’s thumb with a hammer could do nothing with guilt. Fortunately, reinforcements from other units came and finished the training. On the way back to the unit, I only heard a rattling sound. No one shouted, no sleep.

A few weeks later, he showed up with a big bandage on his thumb. He pranked me with a smile on his face. His thumb was seriously injured, but he was glad he did not have to work. After this accident, everybody called him ‘Bang Bang Bang’ because it was like the sound of his thumb exploding. After that, we went to the same training ground many times for live-fire training. Whenever we found animal bones there, we used to tease him “we found your lost thumb.”

My Mentor and Best Friend. (2019, Nov 21). Retrieved from https://studymoose.com/my-mentor-and-best-friend-essay 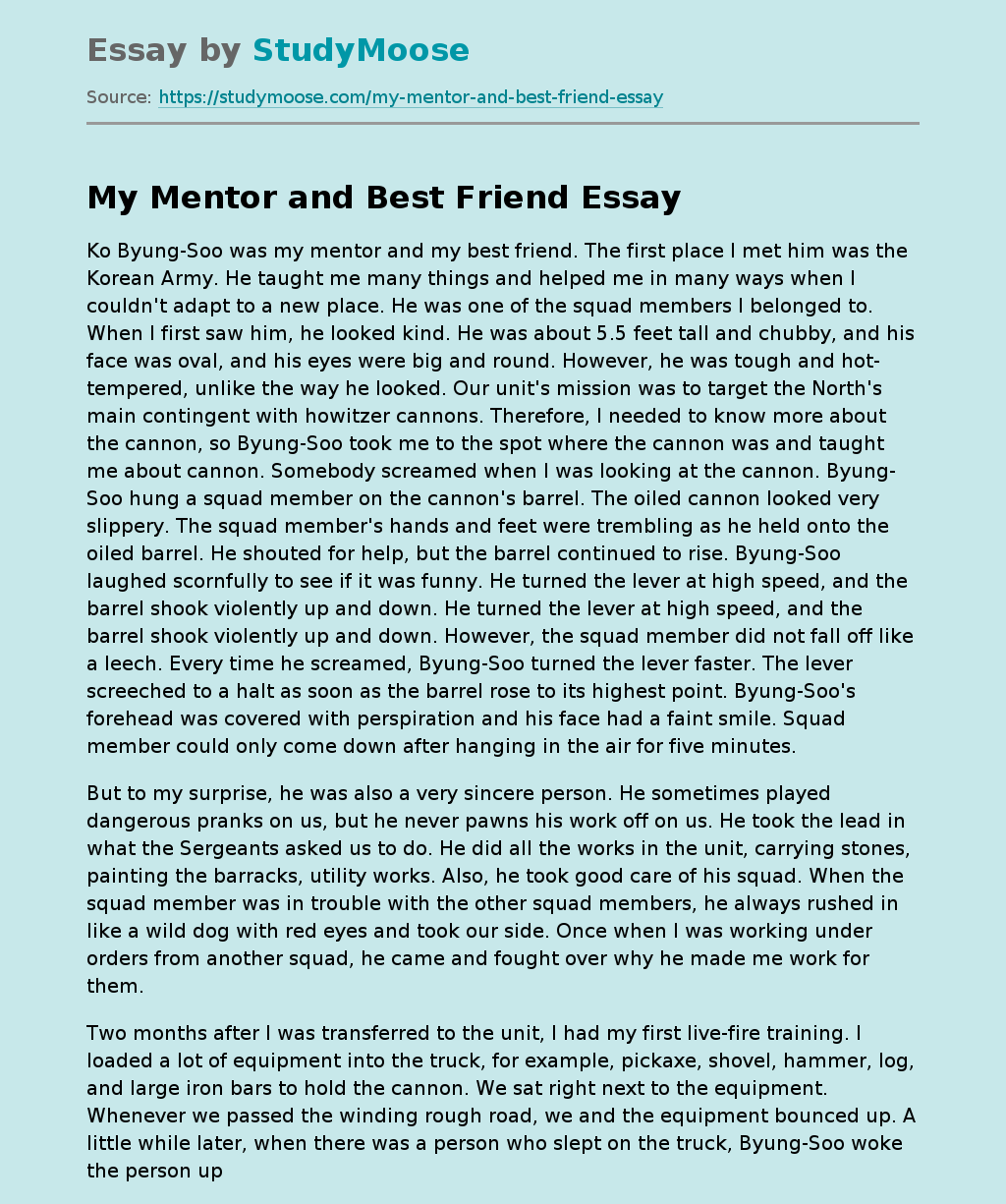