Shakespeare’s tragedy King Lear focuses heavily on the relationship between a father and his daughters and shows the effects of favouritism on all their lives. I will be focussing on the presentation of the relationship between King Lear and his youngest, and favourite daughter, Cordelia. King Lear is an elderly man, quick tempered and foolish. Cordelia is a brave yet respectful young lady, expected of a woman in the patriarchal society at the time the play was set.

First impressions have a huge impact on the audience’s views of the character.

Don't use plagiarized sources. Get your custom essay on
“ Examine the ways the relationship between King Lear and ONE of his daughters is presented in the play ‘King Lear’ ”
Get custom paper
NEW! smart matching with writer

In the beginning scenes, Lear seems slightly foolish and greedy, because he wants his daughters to express his love for him in the best way possible. Goneril and Regan express their love towards their father. Shakespeare uses a number of techniques to portray their false professions of love, including exaggeration. For example “I love you more than word can wield the matter” (Act 1 Scene 1). This was said, because Goneril assumed and assumed correctly that, that was what Lear wanted to hear.

Proficient in: Daughters Are Precious

Exaggeration is a key technique in the play, because when in the presence of the King, the courts would have to be respectful, and to avoid being punished, exaggeration would make the King satisfied as he, for sure was the most powerful figure in the country.

Shakespeare uses sibilance: “Which the most precious square of sense possesses.”(Act 1 Scene 1). The repetition of the ‘s’ sound is quite a harsh sound, so it creates a harsh atmosphere. It also creates emphasis on the important words.

In the play, the first indication of Goneril and Regan’s evil is their insincere professions of love. Because the language that Shakespeare chooses is excessive and over-flattering, an audience recognizes the disingenuousness of the words immediately. On the other hand, the audience recognizes Cordelia as the truthful child, although she appears rebellious. Her words are touching, because she expresses her love to her father simply.

Shakespeare portrays Cordelia as a sad, strong and very stubborn character. This is evident, when Cordelia professes her love to her father: “I cannot heave my heart into my mouth: I love your majesty according to my bond; no more, no less.” (Act 1 Scene 1). From this point, Cordelia is realising that her father cannot possess all her love. In this conversation, the audience sees Cordelia ‘disregard’ her father, although after numerous chances to restructure her profession, Cordelia determinedly refuses to exaggerate her feelings. She only says she loves her father as a daughter should love her father. From the phrase, “I love your majesty according to my bond; no more, no less,” Shakespeare is able to convey that Cordelia is telling Lear that he should not have to ask how much she loves him-it is part of her duty to do so. The audience sees Cordelia as an honest, stubborn, strong and in some ways gullible, which Shakespeare has effectively implied. Cordelia is represented as a rebellious character though, when the audience in the 16th/17th century were part of a patriarchal society, when the society was controlled by men, and women were looked down upon. Insolence was forbidden. But Shakespeare has portrayed a very strong woman, who defies and exclaims what she believes in.

Lear’s three daughters are all eloquent and well-educated women. However, where Regan and Goneril use their intellect to manipulate, deceive and scheme, Cordelia has a rational, honest approach that means her words are few, but all are genuine. Shakespeare has done this, because he wants to illustrate the personality clashes, within the whole family. He uses insults and tension when portraying the deteriorating relationship between Cordelia and her father. The relationships evident in just the beginning of the story highlight the tragedy that was yet to unfold. Despite her father’s obviously growing anger, Cordelia remains calm and refuses to participate in his stubborn game. In fact, it seems that, of the three daughters, Cordelia has become most like her father. She certainly seems to have inherited his stubborn streak.

In conclusion, Shakespeare produces a huge impact on the audience, with some surprising and at times unsurprising consequences to show King Lear and Cordelia’s relationship. The play is a tragedy, playing on themes of loyalty and betrayal. Lear and Cordelia’s relationship, did not develop during the play, as Cordelia was absent through the mid acts, but we see her inputting a huge impact on Lear in the beginning scenes, which the audience recognizes effects his actions and consequences later in the play. Their relationship is of honesty and not false love as Goneril and Regan portrayed. It is as Cordelia said: – “I love your majesty according to my bond; no more, no less.” It is a respectable father-daughter bond, and they understand one another vastly. Lear and Cordelia’s alikeness, however did unfortunately cause the tension in the beginning scene, but their differences, that Shakespeare has implied successfully, was what kept them in their father-daughter bond, which is evident at the end of the play, when Lear mourns Cordelia’s loss. William Shakespeare has effectively presented Cordelia and Lear’s relationship as a very complex yet fascinating relationship.

Examine the ways the relationship between King Lear and ONE of his daughters is presented in the play ‘King Lear’. (2020, Jun 02). Retrieved from https://studymoose.com/examine-ways-relationship-king-lear-one-daughters-presented-play-king-lear-new-essay 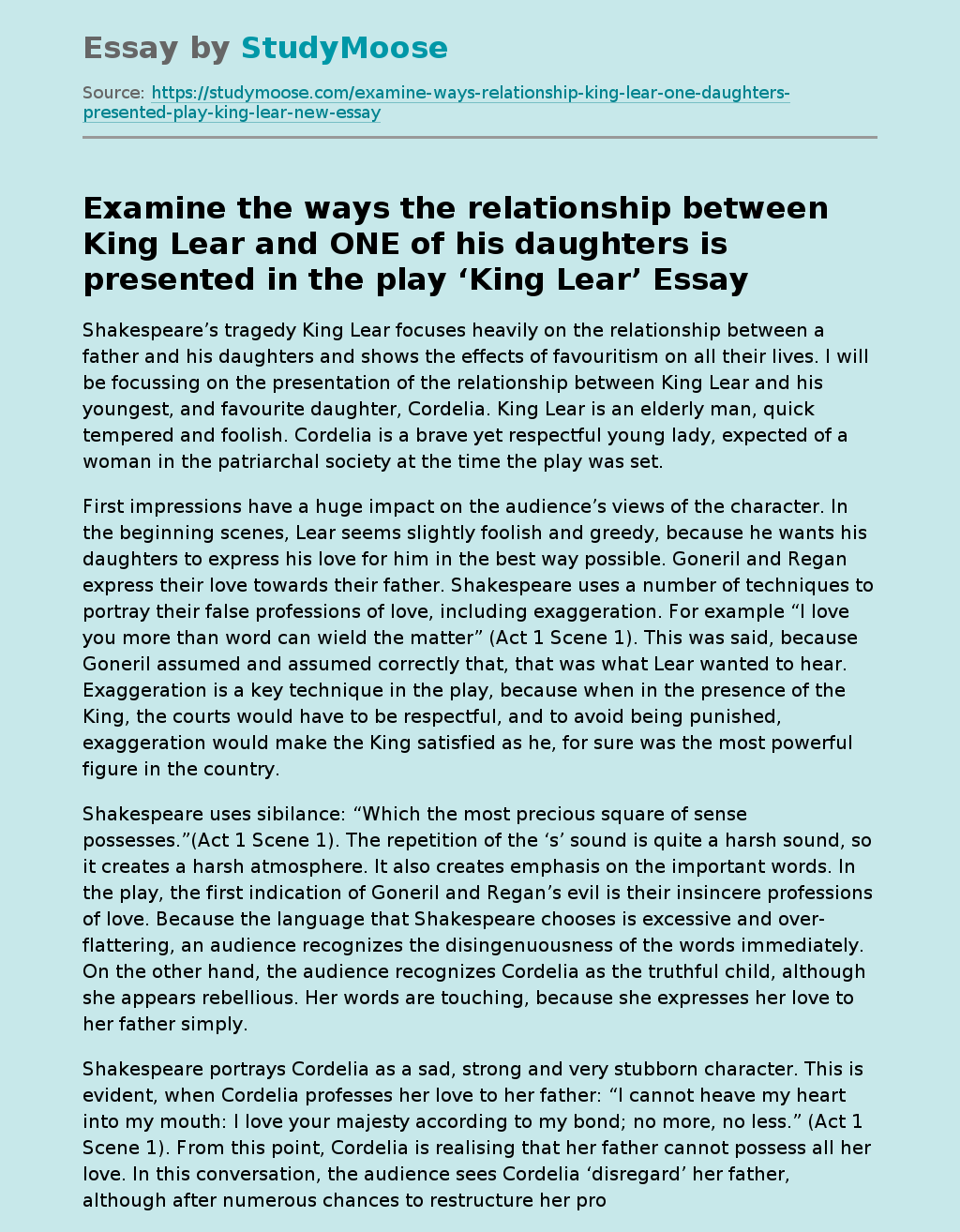