The narrator in the Joy Luck Club, Jing-Mei, matures as a woman through her relationship with her mother, Suyuan. The mother-daughter relationships in the Joy Luck Club mirror the process that mothers and daughters must go through in order for the daughters to mature into adults. The daughters must first reject their mothers in order to become independent individuals, later, the daughters return to the mother in order to reach the final stage of maturity. Jing-Mei’s transformation into a mature woman and her difficult relationship with her mother can be seen through the story of the piano.

Don’t waste time
Get a verified expert to help you with Jing-Mei and Suyuan’s Mother-Daughter Relationship
Hire verified expert
$35.80 for a 2-page paper

Jing-Mei and Suyuan’s relationship is often based on misunderstandings that come from their cultural difference. Jing-Mei sees her mother as being over critical and unemotional. This can be seen in Suyuan’s quest to make Jing-Mei a child prodigy.  Suyuan sees Jing-Mei as the new Shirley Temple, sending her off to the stylist to curl her straight Asian hair, and signing her up for singing and tap dancing lessons.

At first, Jing-Mei cooperates in an effort to win her mother’s approval, Tan writes, “In all of my imaginings, I was filled with a sense that I would soon become perfect. My mother and father would adore me. I would be beyond reproach” (143).  But this cooperation soon wanes as Jing-Mei feels the pressure to be perfect and her sense of failure stemming from her mother’s disappointment in her. Tan writes, “And after seeing my mother’s disappointed face once again, something inside of me began to die.

I hated the tests, the raised hopes and failed expectations” (144). Their relationship reaches the flash point when Suyuan attempts to turn Jing-Mei into the little piano playing Chinese girl she saw on The Ed Sullivan Show.

Jing-Mei is resentful of her mother’s need to prove that her daughter is talented and Suyuan sees her daughter as ungrateful. She doesn’t practice and winds up embarrassing her mother at a recital in front of her relatives. After the recital, the pent-up emotions erupt into accusations. Suyuan tells Jing-Mei, “Only two kinds of daughters. […] Those who are obedient and those who follow their own mind! Only one kind of daughter can live in this house. Obedient daughter!” (153). Jing-Mei counters, “Then I wish I wasn’t your daughter. I wish you weren’t my mother” (153). Jing-Mei rejects her mother’s attempts to make her talented, thus rejecting her mother.

This rejection is necessary for Jing-Mei to mature into an individual. It also represents the cultural differences between the two women; Suyuan’s constant nagging and pushing is the only way she can show her love for her daughter, Jing-Mei stubbornness and individualism was inherited from her mother. On Jing-Mei’s thirtieth birthday, Suyan gives her the piano as a gift. This gesture shows Jing-Mei that her mother forgives her stubbornness as a child and frees Jing-Mei from the guilt she felt for the rejection of her mother. The piano represents that their relationship has almost come full circle and is almost complete.

After her mother’s death, Jing-Mei learns to appreciate her mother’s strength during her trip to China; which gives her a clearer understanding of her mother as a woman. She sees how the Chinese woman is expected to be passive, even in America, and her mother’s inherent strength allowed her to run from the Japanese, to make the heart rendering decision to abandon her babies, allowed her to leave an abusive marriage, and gave her the courage to start a new life in American. Jing-Mei sees her mother in herself and this allows her to transform into a mature woman. 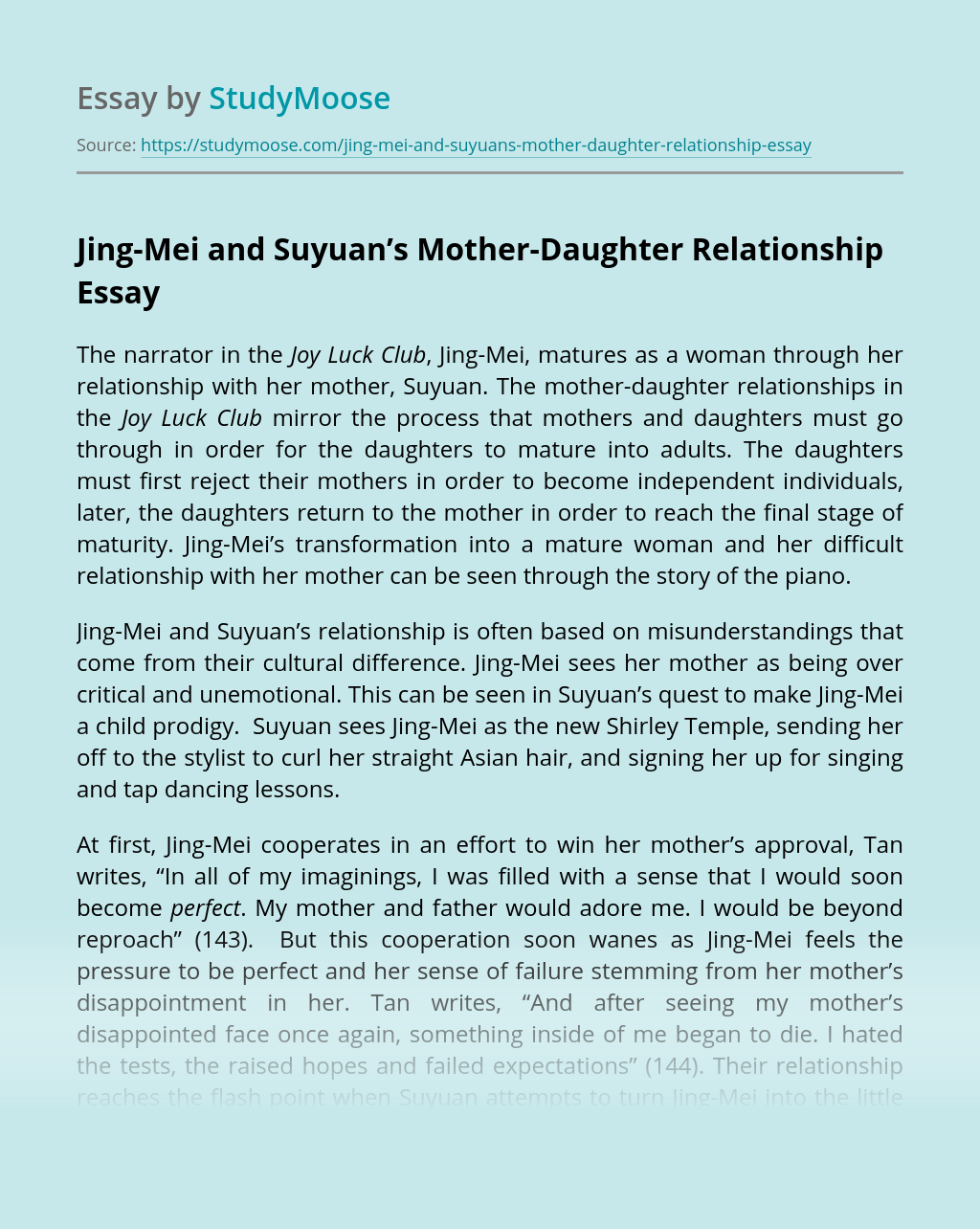