In the short story “Girl” by Jamaica Kincaid the author gives a perspective of the relationship between a strict mother and her young daughter. Jamaica Kincaid wrote series of sentences that sets the tone of the story to be uptight, oppressive, and informative. The author described her daughter into becoming a ‘slut’ which tells the readers that the mother is worried and is disapproving of her daughters actions. Others might think that the story is only about the daughter repeating what her mother tells her to do but it really it’s the perspective of the mother trying to prevent her daughter from becoming a ‘slut’ and changing her to become a lady.

Don't use plagiarized sources.
Get Your Custom Essay on “Girl” by Jamaica Kincaid Just from $13,9/Page

Although others may think otherwise that the character who plays girl, is in fact making a mockery of her mother’s commands. In theory people may say that the mother repeated herself so often about her daughter’s behavior and teaching her how to do her responsibilities correctly that the daughter have memorized her mother’s lectures and began to repeat them to herself to show rebellion against these tasks.

With the attention to the dialogue, shows the mother lecturing her daughter.

In the beginning the author wrote “but I don’t sing benna on Sundays” (line 7) in an italicized format giving the idea that someone, in this case the daughter, is responding to her mother’s lecturing trying to defend herself. This goes to show that the poem is in fact a conversation held by a mother and a young girl with disapproving behaviors causing her mother to scold those unacceptable behaviors. Throughout the poem lists a few teachings into having a good behavior and proper manners. There are specific ways the mother instructed her daughter to do her chores. For example, “this is how you smile to someone you don’t like” (line),”this is how to set a table for dinner”, and “this is how to bully a man”.

The lists goes on and I can relate to these rules. My mother taught me the importance of discipline throughout my whole life teaching me right from wrong and telling me to do chores and teaching me how to do things on my own since I was now becoming a young adult. Mothers have many different parenting ways to teach their own daughter how to become a lady and most will teach their daughters by the mistakes they’ve made in the past or by the experience of their mothers giving the same lecture to them when they were coming up into the teenage years. 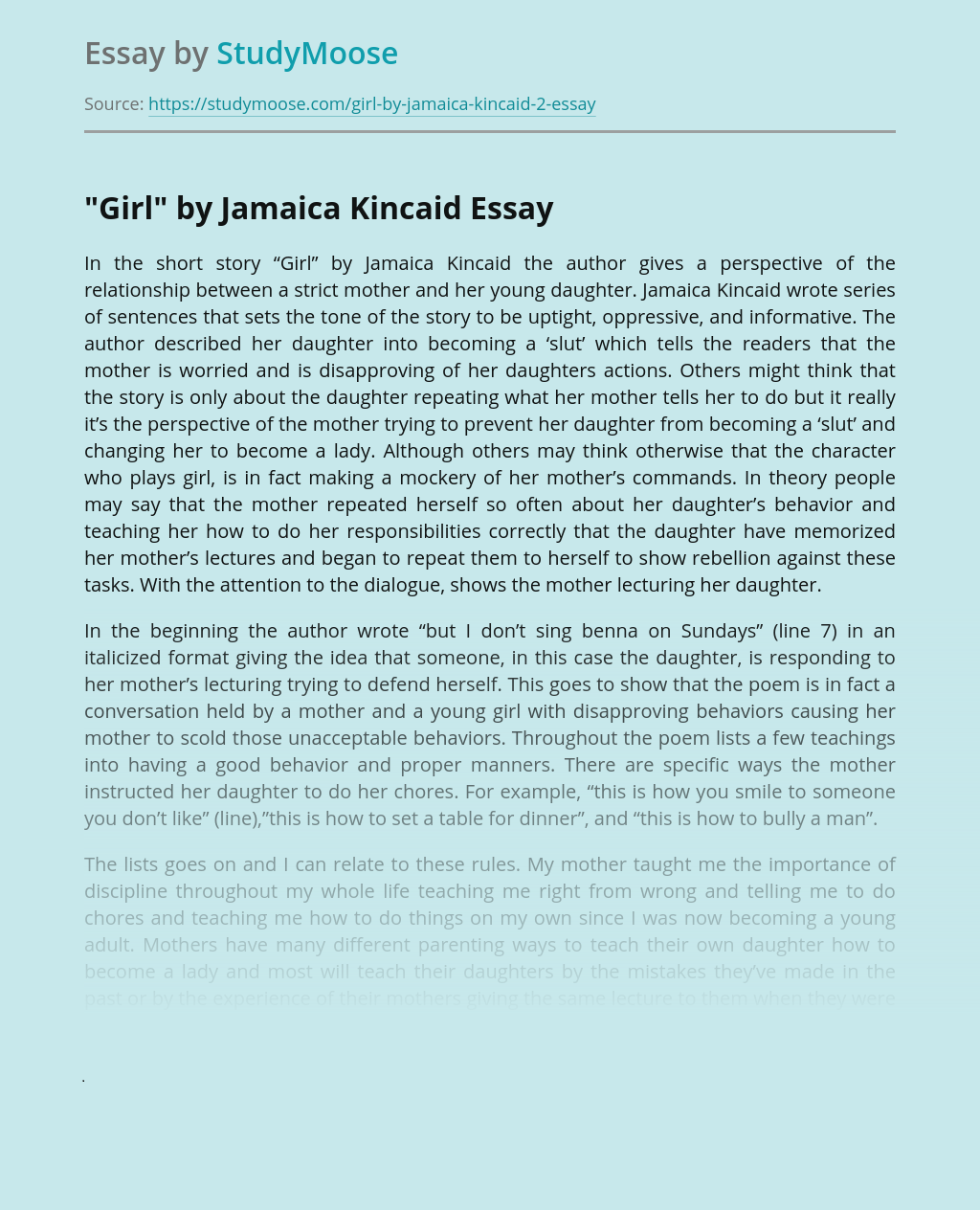 Introduction Hasn’t everyone at some point in their life been peered pressured. Teenagers all across America face it every day. It ranges from cheating on a test to robbing a convenient store. Peer pressure is a serious life situation that everyone encounters at a certain point in their life. And let’s face it, just say...

In the book “All American Girl” by Meg Cabot, Samantha Madison, a sophomore artist-to-be, is an outcast in John Adams Preparatory School and has only one friend, Catherine, who unlike Sam, craves to be part of the ‘in-crowd’ or the popular in the school. Many other teens today also crave to be part of the...

Physical, Cognitive, Social, and Personality Individuals experience many changes to the physical body, cognitive abilities, social development, and personality development throughout the various stages of life. This article looks at a few of the changes experienced during stages of development of the adolescent, young adulthood, middle adulthood, and late adulthood. Adolescent Stages of Development The...

View sample
Watching TV is a waste of time ?

Nowadays, television has become a major part of our lives. Almost every home has a television. In fact, even restaurants, grocery shop, clinics and also mamak stores have televisions as a way to attract customers. We are now a television nation but this is not something that we should be proud of because television is...

This short story by Mike Feder, is about his own life as a discouraged teen in the 70’s society. When Mike was a young boy he was in a constant state of teenage depression, and one of the major reasons why, was his mother’s both mental and physical illness. This sickness of hers, made him...