The short story of “Girl” by Jamaica Kincaid is about a mother and her relationship with her daughter. It is a harsh one sided conversation between the narrator and her mother, with the mother doing all the talking. The story gives a rich description of what her mother expects from her in all aspects of her life, from chores, to how she plays, to what she sings in church. From each line you see the viewpoint of how her mother sees the world, what is proper in her eyes and her expectations for her daughter.

Don't use plagiarized sources. Get your custom essay on
“ “Girl” Jamaica Kincaid ”
Get custom paper
NEW! smart matching with writer

Throughout the story the symbolism gives deeper meaner to every verse and shows deeper insight to their realsonship.

One of the first symbols is in the first line is the color white. The use of the color white is foreshadowing the tone for the whole short story. White represents pure, virgin, and clean. The mother is reprimanding her child for the way she walks “on Sundays try to walk like a lady and not like the slut you so bent on becoming” (380).

The narrator’s mother already has concerns of her daughter becoming sexually promiscuous and tarnishing her reputation. The mother’s tone is harsh throughout the whole short story. She is demanding her daughter does these things as she dictates. This is not a sweet moment between a mother and her daughter. The conversation is laced with insults and fears. The mother also warns her daughter about eating on the street “don’t eat fruit on the street-flies will follow you” (380).

Flies are seen as bottom feeders, dirty and irritating and when flies are surrounding an animal it is seen as filthy. She is telling her daughter that she will be seen as dirty if her fruits are out for everyone to see.

This has to do with being covered and not letting everyone stare at you. This supports her idea that her daughter will become promiscuous and not respectable. Another symbol example is the importance on clothing. The mother cautions “when buying cotton to make yourself a nice blouse, be sure that it doesn’t have gum on it, because that way it won’t hold up after a wash” (380). The mother’s emphasis on clothing highlights her view of how you dress is a reflection of you as a person. Its gives insight to your character and personality that you take pride in how you look. Clothing is used cover your body, when you are covered you are seen as respectable in her community. In the conversation “this is how to hem a dress when you see the hem coming and so to prevent yourself from looking like the slut I know you are so bent on becoming” (380)

This is the second time that her mother accuses her of turning in a slut. The hemming of the dress is no longer a lesson in how to sew, but the act itself has tuned into being seen as respectable and that reinforces her mother’s view. In addition, “Benna” is also a symbol in the text. The word benna is one of the cultural symbols she uses. It gives insight to where the story is taking place. It also gives the reader the first response to her mother who has been talking the whole time. “I don’t sing benna on Sundays at all and never in Sunday School” (Kincaid 380). Why did the narrator feel compelled to finally speak up for herself in this moment? What did her mother mean by accusing her of this that the narrator feel she had to defend herself? From this short sentence the reader can assume that something that has changed culturally. If the daughter is implying that singing Calypso music is frowned upon and considered taboo that means singing it in Sunday school would be a grave disrespect. The other aspect of the sentence is the use of Sunday school, the introduction of Christianity has added to the mother’s fears of her daughter being respectable.

The mother is also going through changes culturally and that has influence her concerns for her daughter. Another example of cultural symbolism is the “this how you set a table for tea” (381). This line in the story shows a reference to Britain through tea. The reader can accept that what has been going on culturally is in reference to Britain. There are foreigners in her country who could be judging the country as they interact with the natives. Her constant fear of her daughter becoming a slut is stemming from what the mother now views as proper behavior. They are many symbols that come from food. The use of food in this short story has a small number of layers. There is the superficial layer that acts as a cultural symbol in her use of her native dishes in the text. It also adds depth to the short story and shows the reader where the narrator and her mother are living “this is how to make bread pudding, this is how to make doukona, this is how to make pepper pot” (381).

The reader has only seen the mother in the fierce, menacing tone. Upon further analysis of the symbolism, it shows that her mother doesn’t want her to forget her cultural heritage among all the changes going on currently in her life with Sunday school and the British being in her country. She wants her daughter to learn how to cook these native dishes as a way of passing down her legacy. Another layer is the mother finds cooking to being part of being a respectable women. Cooking is something the mother puts value on. She believes that a woman who can cook is valuable to their society. Over the course of the text she come back to instructing on how to cook. The reader is also able to see it in the beginning, middle and end of the short story. It is not just being able to make these dishes, but the whole act itself “cook pumpkin fritters in very hot sweet oil” (380).

The mother believes that cooking strengths the bond her daughter will have with her family and with the community. The last symbol in food is the when the mother tell her how to she is to squeeze the bread “always squeeze bread to make sure it’s fresh; but what if the baker won’t let me feel the bread?; you mean to say that after all you are really going to be the kind of woman who the baker won’t let near the bread” (381) This goes back to the overall theme of the entire story. Her mother wants her be the kind of lady that the baker lets squeeze the bread. The word squeeze is suggestive in a way that the mother doesn’t want her daughter to allow anyone to “squeeze” her. It also reinforces that her daughter should not become a slut or she will be not be a functioning member of society. Sluts and wharf-rat boys are not part of their society; her mother warns “you mustn’t speak to wharf-rat boys” (380).

They are outcast, if she becomes a slut the baker will not allow her to touch the bread and she will be an outcast like the wharf-rat boys. The final symbol is housework; the importance of it is seen throughout the short story. The narrator’s mother makes many references toward housework, “Wash the white clothes on Monday and put them on the stone heap; wash the color clothes on Tuesday and put them on the clothesline to dry” (380). She sees housework as a way of keeping busy so her daughter doesn’t become promiscuous. It also establishes her role as women taking care of her house. In their culture this seen a respectable and earns them respect from their community.

This short story looks like a simple stern lecture from a mother to daughter. When you look at each sentence in-depth, you see mother has fears that are based not in anger but in reality due to all the changes going on in their culture. These fears are expressed sometimes harshly by calling daughter a slut, and her tone throughout the story. At the end it is just a mother being concerned with her daughter and wanting the best life possible for. The symbolism gives more insight than what the reader can read just on the surface. It shows a whole different character for the mother and sheds light as to why the mother has these expectations and fears. What people fear shapes them and their relationships 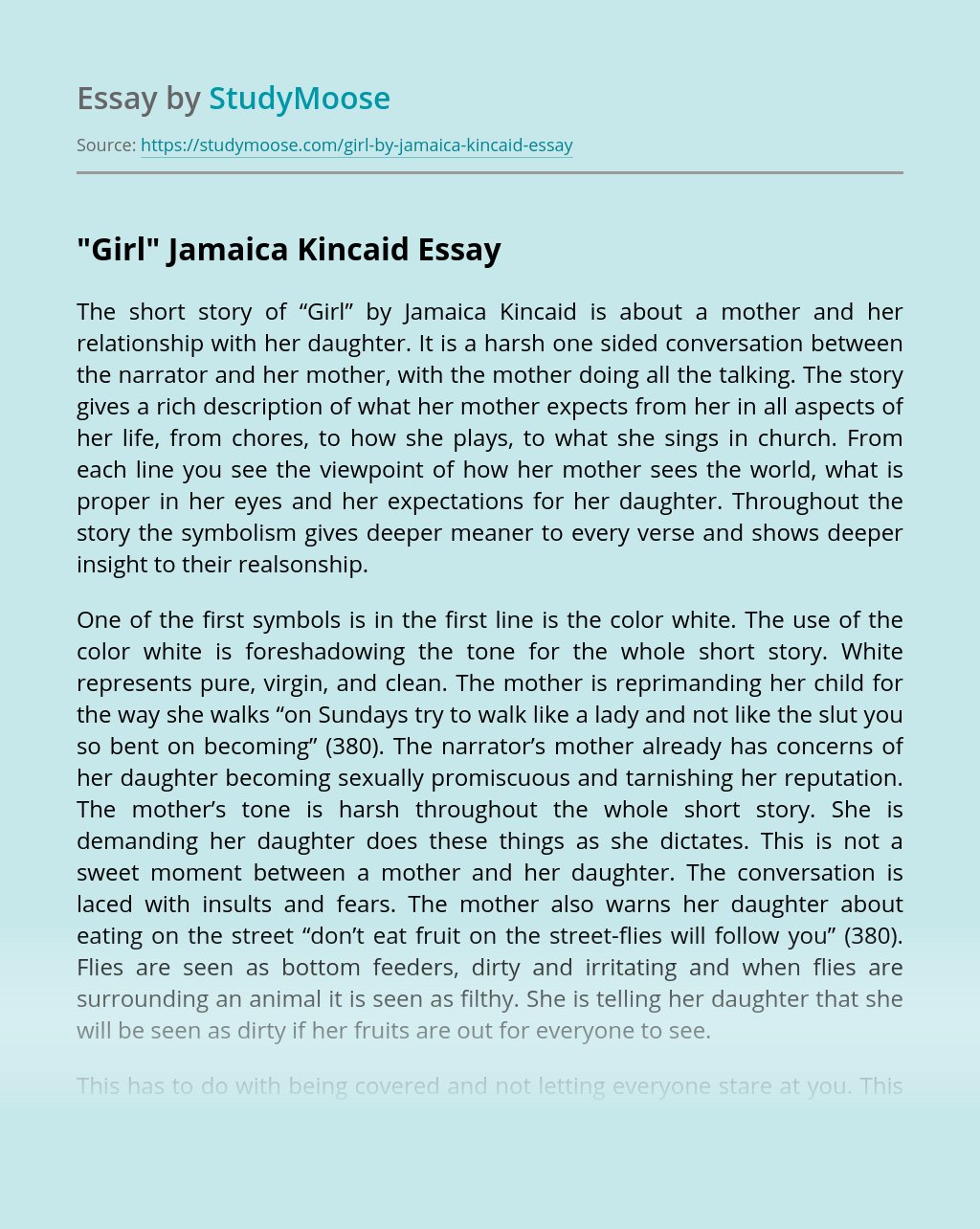