Conversations around gender and gender roles have been existent since time immemorial. Gender roles refer to social characters that define actions, approaches, and conceptions that are considered tolerable, desirable, and suitable for people based on their alleged sex. Gender stereotyping roots from such definitions and has taken over the day to day cultures of individuals. It has become a tradition passed from generation to the next, even in the wake of liberal individuals. Girls and boys are taught how society expects them to behave from a tender age.

Don't use plagiarized sources. Get your custom essay on
“ Short Story Girl by Jamaica Kincaid ”
Get custom paper
NEW! smart matching with writer

Many avenues are used to pass this tradition, including drama plays, stories, movies, books, and poems, to name a few. Jamaica Kincaid’s short story ‘Girl,’ illustrates the differences between female and male roles, majoring in the feminine stereotypes, set by the society at the time it was written and the present.

The short story is a monologue a mother is sermonizing to her daughter, who is coming of age. Only twice is the mother’s monologue interjected by her daughter, to defend herself or to ask a question. The perspective in the narrative is portrayed through the daughter’s point of view. The monologue is a list of instructions from her mother on how to live in their present-day social setting. The mother’s instructions are sexist cultural characteristics passed on through the generations.

A mother’s instructions can be viewed as detrimental measures of gender roles imposed upon a daughter who is breaking into womanhood.

Throughout time mother and daughter relationships have been dilapidated as women’s liberation has taken place. Across the generations, many mothers have an old-fashioned opinion about how their daughters should behave and their place in society. The short story “Girl”, by Jamaica Kincaid, is a prime example of how a mother wants her daughter to follow the cultural traditions of society. The theme in the short story “Girl” strongly insinuates that a woman should be domestic and there is a certain way that she should behave, especially in society. Many elder women feel that a woman’s role in life is to be domesticated and women should not break free of tradition. The daughter in the short story is conflicted with the mother’s set of instructions imposed upon her. The two times the daughter interjects her mother’s monologue she is in demonstrating that she would like to be allowed to make her own decisions in life. As young girls grow up, they tend to rebel against the traditions their mothers try to impose on them. As young girls rebel, this causes a strain on their relationships.

The series of instructions the mother lectures her daughter on is the mother’s attempt to teach her daughter the thoughts and moral beliefs of their present-day social setting. The mother is conveying to her daughter that she needs to be domesticated, obedient, subservient, and submissive. In the short story the mother realizes “the girl has reached puberty and may explain why she is now receiving this lecture on behaving like a woman” (Kincaid and Becnel 57). Since the mother’s daughter is coming of age the mother believes it is the correct timing to lecture the daughter on the morals, she believes the daughter needs to follow. The message the mother portrays to her daughter is the belief that happiness steams from a life of domesticity. The representation of gender roles in the short story illustrates that the men are the breadwinners and the women’s role is to stay home and tend to the children. The household work, therefore, brings power and even prestige to how society will view her daughter.

The intention of the mother’s method is for her daughter to be a proper young lady in the eyes of her peers and a future husband. The mother’s monologue instructs her daughter on how to properly attend to a man. The mother advises her daughter how to conduct herself in front of men so that she will find an appropriate husband. In the short story the mother “warns her about losing her reputation because then the girl losses her value as a potential wife” (Wiedemann and Garbett 3). The mother is conveying to her daughter that a woman is expected to behave in a particular manner to be accepted as the type of woman a man would like to marry. The mother is portraying to her daughter that a women’s virtue determines if a man will desire to marry her. The daughter’s mother is instructing her to behave in a certain manner to acquire a husband of equivalent status and not give any time to unsuitable partners. She advises her daughter “you mustn’t speak to wharf-rat boys” (Kincaid, lines 10-11). The type of behavior the mother instructs her daughter to follow is oppressing her daughter and limiting her options to simply becoming a homemaker.

The third-person point of view plays an important role in conveying the daughter’s intense relationship with her mother. The whole time the mother is delivering her monologue to her daughter not once does she stop to hear the daughter’s input on her instructions. The mother’s mindset is that the daughter needs to learn her rules and there is no option to object to her demands. In the first instance, the daughter intervenes is to defend herself against the mother’s accusations and the mother demises her. The second incident the daughter intervenes was to ask her mother a question and she answers her daughter in a condescending voice. The third-person point of view illustrates the intense relationship between the mother and daughter.

The mother believes that her daughter’s reputation and respectability determines the quality of her life she will have in society. The girl’s mother is apprehensive that if her daughter misbehaves it will reflect poorly on her reputation. The mother does not necessarily disapprove of what society views as poor behavior, she just does not want her peers or society to believe her daughter is in her words a “slut” (Kincaid, line 9). The mother “seems obsessed with her daughter’s sexual propriety, and especially with ensuring that the girl devotes her sexual attention to a single man” (Kincaid and Becnel 59). The mother knows her daughter’s female peers and society will judge her sexual behavior. Whereas men are able to be sexually promiscuous, women will be strongly prejudiced against this type of behavior. The mother recognizes being sexually promiscuous is a double standard in society. These stereotypes establish the differences between the sexes. The mother is knowledgeable about the fact if women are sexually promiscuous it will tarnish their reputation while if a man acts the same way it does the complete opposite to his reputation.

The cultural traditions the mother is passing on to her daughter are vastly different compared to the male roles given to young men. In many societies gender roles differ between males and females. Various cultures tend to place gender roles on both sexes and expect them to follow the roles given. The mother believes the daughter should “take care of the needs of the patriarch of the family if she wants to lead a comfortable life” (Jayasree 84). The mother instructs her daughter to follow certain gender roles that would be considered normal for women in their society. The gender roles placed on the daughter have a dramatic impact on the type of life she will live, while gender roles do not affect young men as dramatically. Young men are able to obtain much more freedom to act the way they please without being judged by society. Men are not expected to take on the domestic role as the women are. The women are expected to perform the entire domestic duties of keeping a home and tending to the children. Men are not restrained by gender roles, which in turn allows them to live the type of life they choose and not a life already scripted for them. The mother in Kincaid’s short story demands her daughter to follow the cultural traditions passed on through the generations.

The instructions the mother lectured upon her daughter to shape her future have an underlying sense of judgment and stigma. The cultural traditions the mother is passing onto her daughter are vastly different compared to the male roles given to young men. Throughout time various societies have given women the domesticated role. Society has viewed women’s role solely as a homemaker. Society has placed pressure on women to establish a home for their husbands and a stable environment for their children. These sexist demands placed on women have been present for centuries. Kincaid’s short story “Girl” depicts the harsh reality of numerous women’s lives and the sexist pressures placed on young girls in society.

Jamaica Kincaid’s “Girl” is an unconventional narrative written through the perspective of the daughter. The mothers’ focus and tone of voice allow the reader to sympathize with the daughter’s position. The daughter’s point of view is significant because it illustrates the intense relationship between the mother and daughter. When the mother uses her admonishing tone to deliver her point across to her daughter, it shows her concerns she has for her daughter. The mother wants her daughter to sincerely comprehend the aspects of their present-day social setting. Kincaid’s narrative is a relatable short story between parents and children

Jamaica Kincaid’s short story “Girl” emphasizes the ideas of gender stereotypes when the mother sermonizing her set of instructions to her daughter, these set of instructions can have detrimental consequences to her daughter’s future. These gender stereotypes the mother is instructing her daughter to follow enforce limitations on what type of existence her daughter will experience. The cultural gender stereotypes the mother lectures her daughter illustrates a gap between both male and females. Various cultural traditions passed onto young women are exceedingly different in contrast to the male roles given to young men. The majority of societies the gender role given to women is the domesticated role. These sexist demands placed on women have had negative consequences on how women must live their lives. Radical feminism, as illustrated in the mother’s monologue can be subjective, has oppressed women, and can even cause women to be disheartened. Perhaps, one day all women can live in a liberal society where an individual is able to live a life where one can choose what type of life they would like to live rather than having to live by ancient set decrees. 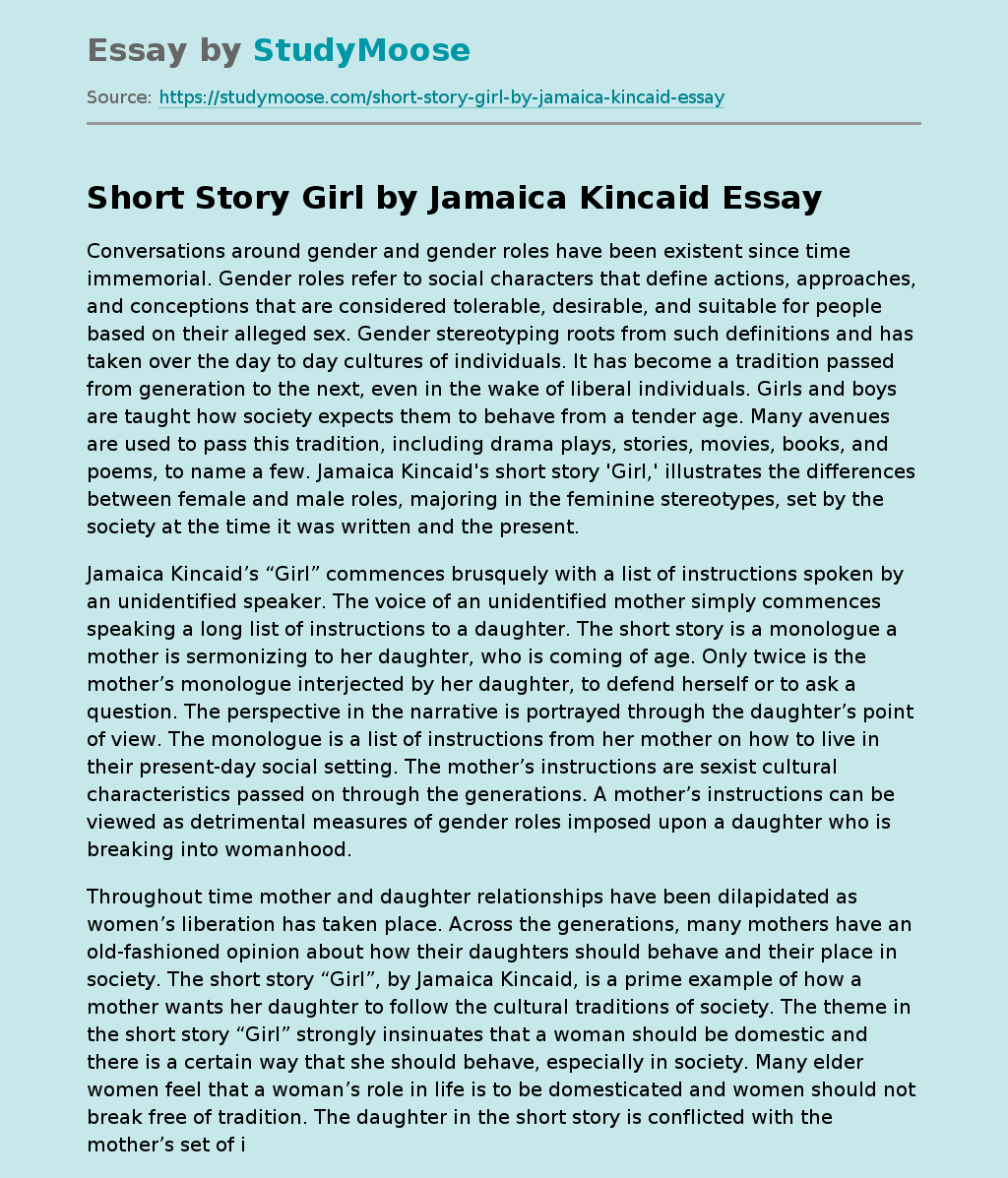