“Girl” by Jamaica Kincaid and “Talking Back” by Bell Hooks

In the stories, “Girl” by Jamaica Kincaid and “Talking Back” by bell hooks, the stories show a very strong oppression towards females. Females are looked down upon and have no say in what they want, it is seen that women are stereotyped by society and viewed as someone who is meant to stay in the house and abide by intensive rules and regulation just because they are women. In Kincaid’s piece, the mother is seen giving advice to her daughter that will allow her to keep a proper house of her own in the future.

Don't use plagiarized sources. Get your custom essay on
“ “Girl” by Jamaica Kincaid and “Talking Back” by Bell Hooks ”
Get custom paper
NEW! smart matching with writer

She tells her daughter how to do such household chores such as laundry, washing, sweeping, cooking and setting the table.

These instructions given to her suggest that daughters’ were taught specifically by their loved ones, especially the mother on how to live a fulfilling life and keeping their husband happy is the number one goal of a proper and successful women. In hooks piece, she begins by recounting painful personal experiences like growing up in a repressive household, struggling to find her own voice through her journey to become a writer and dealing with the pressure of being in a field of work which is male dominant.

By portraying the narrator as a figure of female oppression in a time where society’s main focus is men dominating over everything other than household duties, Kincaid and hooks show that in many societies, women are bound to their husbands whether they willing or not.

Societal pressure starts to push on to women very easily and can cause them to over examine every part of themselves.

Although the narrator in “Girl” is not a man, the things the mother says to her daughter portray what is expected in a patriarchal society. The mother tries to raise her daughter in the same structure that she herself was raised in. Her mindset is through the eyes of what her mother taught her and the way that she expected her to portray herself to her husband. The mother does not to question some of the expectations that she has of her daughter, she simply agrees with them and expects her daughter to do the same because that is what the mother was taught as well. The mother goes on to say, “this is how to behave in the presence of men who don’t know you very well, and this way they won’t recognize immediately the slut I have warned you against becoming…”(Kincaid 321).

The narrator teaches her daughter on matters of how to obediently serve her husband and perform all the household duties associated with the title of house wife. Not even once did she ask he daughter about what she thinks or if she has any questions, it was merely instructions as if she were to be reading a list from a piece of paper. Her mother is in no way even empathic to what her daughter will have to go through, on the contrary she is tough on her and goes as far to call her a slut if she is not capable enough to follow the instructions she is given. The instructions that are being drilled into her head are now just going to be a daily reminder that everything she does, society expects her to act in a certain manner and that her needs do not matter, they are beneath the needs of a man, her husband at all times. To the reader, it is obvious that much of what the mother teaches her daughter in “Girl” is oppression towards females which is also what hook’s addresses in her essay through a different perspective.

Kincaid utilizes enumeration to display how women in society are pressured to be at the hands of a man and stay within their boundaries along with being puppet and the hand of society and men. Enumeration is the idea in which there is an action of mentioning a number of things one by one or in a format of listing. This idea is very clearly seen throughout Kincaid’s piece and hooks piece. The mother instructs the daughter, “This is how you iron your father’s khaki shirt so that it doesn’t have a crease, this is how you iron your father’s khaki pants so they don’t have a crease…”(Kincaid). In this, the use of enumeration is emphasized to show how the mother is giving step by step instructions to the daughter on how to behave and what a proper woman needs to do in order to live a complete life as a perfect wife. These instructions are consistently listed throughout this whole piece and gives the reader the understanding of how repetitive and structured the life of a woman was expected to be since they could not develop a voice of their own. When the daughter tries to intervene to ask a question, the mother ignores her and continues on with her instructions.

This is symbolic of how women are expected to accept their roles as a stereotypical woman without asking any questions and if they are to stand up for themselves they are clearly just ignored and brushed off. Hook describes the reason as to why girls did not try speaking up, stating that “To speak then when one was not spoken to was a courageous act-an act or risk and daring”(hooks 426). The message this ends up giving is that, for a woman to speak up for her own social rights as a human being was considered out of the ordinary or socially unacceptable. No one was willing to go against the norm and if by some chance one were to speak up, no one was there to listen or help make a change. Women were told to do what they know best, which is stay in the house and focus on the family, the man will take care of everything else. Thus, as Kincaid and hook’s demonstrate, the lives of women became unwillingly refrained and repetitive as a result of their voices having little to no power in society as a whole.

The unresponsive nature that society and the world has towards women is uncalled for and to a disheartening degree. Kincaid’s use of a stern and monotone voice for the narrator just goes to show how harsh and indifferent society is on women and what they have to say. In “Girl”, the mother, as a result of her own experiences, knows exactly how hard it is for a girl to grow up in a society filled with the social pressures of being a good fit for their husband and acting in accordance to what society deems acceptable. Her directness in tone portrays the seriousness of the circumstance at hand, and as a mother she naturally embodies a sense of protectiveness for her daughter which is felt throughout the narrative. hook’s essay also addresses the issue of behavioral restrictions for women in these times, and more so touches upon their unheard voices all together.

She recounts that, “In the old school, children were meant to be seen and not heard”(hooks 426), but girls specifically bare that burden compared to the boys. She describes how their, “speech, the right speech of womanhood, was often the soliloquy, the talking into thin air, the talking to ears that do not hear you, the talk that is simply not listened to”(hooks 428). This emphasizes how nothing a women did or said was ever taken seriously, it went into one ear and came out through the other without being heard or understood by society. Similar to what the mother was trying to convey to her daughter about how she needs to just listen to what she says because there is no hope to have a change towards the way that the world expects them as women to project themselves.

All in all, in both “Girl” by Jamaica Kincaid and “Talking Back” by bell hooks, women are seen under men. Both pieces show how women are not considered equal to men through a different perspective and in a different area. Kincaid talks about how women are seen just as housewives with the job of just taking care of the husband and house while hooks talks about how in the field of writing how hard it is to make a name for yourself when in a male dominant field. Along with this, both pieces cover how the voice of a women in society is not powerful and not taken seriously. Expectations are very high of women but, only to stay in the bubble of what society gives them. This is a clear indication of the differences found between the genders and how societal pressures have an immense impact.

“Girl” by Jamaica Kincaid and “Talking Back” by Bell Hooks. (2021, Dec 02). Retrieved from http://studymoose.com/girl-by-jamaica-kincaid-and-talking-back-by-bell-hooks-essay 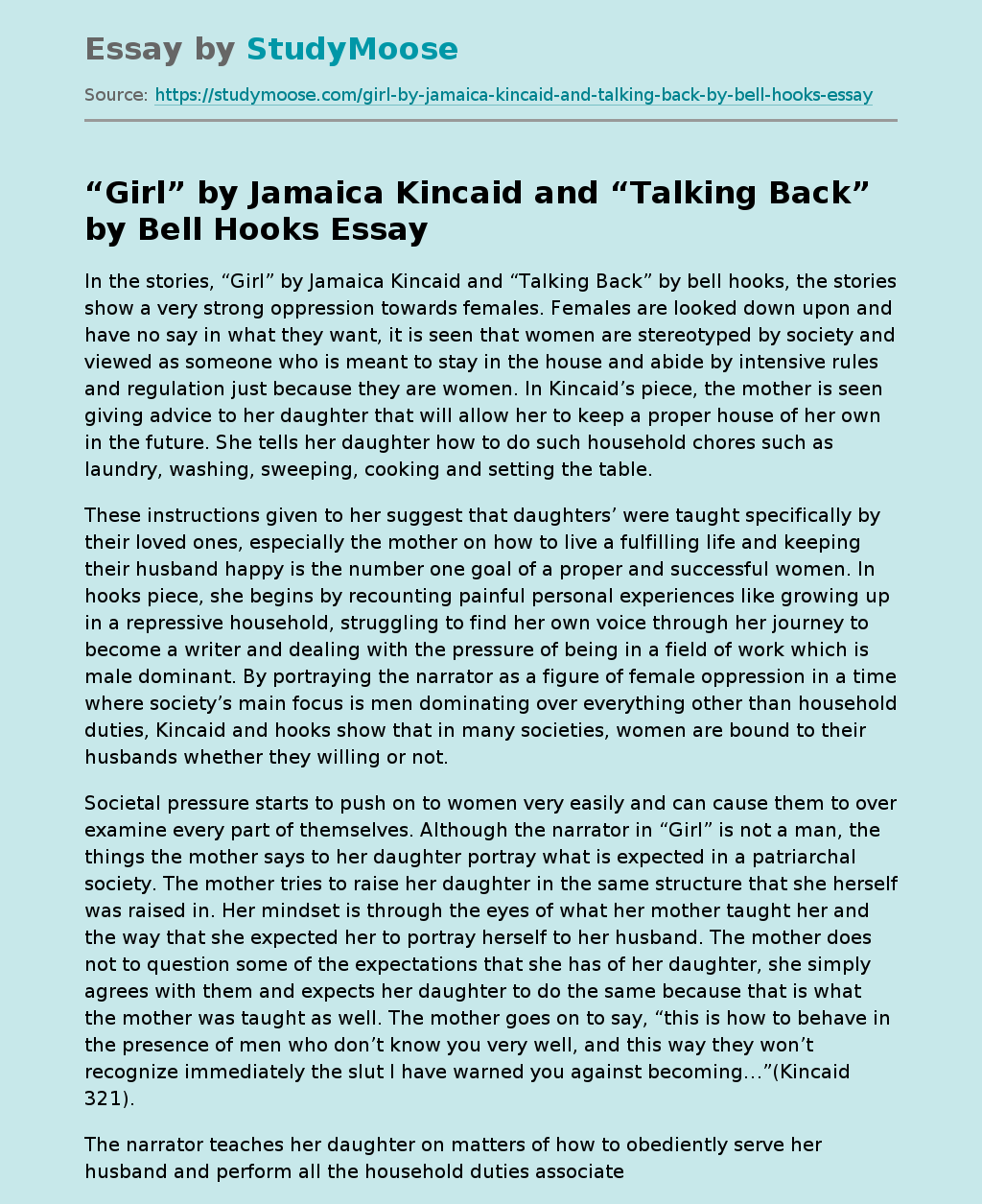