“She stared at the woman she had been and was to become.” — Kiswana Browne

Mother-daughter relationships are complex and diverse. Some mothers and daughters are best friends, and others talk once a week. Some see each other weekly while others live in different cities or states. Kiswana Browne and her mother have a relationship like other mothers and daughters. She only wants the best for her daughter. They may fuss and they may argue, but they are more alike than they realize.

Kiswana Browne, whose real name is Melanie, was born and raised in an affluent black suburb called Linden Hills. Like most people that graduate from high school, Kiswana went on to college to further her education. While in college, Kiswana was discovering her blackness and protesting for equality amongst black people. She changed her name and tried to wear an Afro, but her hair was so thin and fine-textured. She had to use lacquer so it would not lay flat.

But before she had the chance to graduate from college, she dropped out and decided to move to Brewster Place to live with her people. Kiswana’s mother unexpectedly came to visit her at her new place. Kiswana is still afraid of her mother despite the fact that she has left her house and rejected her parents’ way of life. This is shown when she says, “Oh, God, it’s Mama!” She still feels the guilt that all the kids have when they do something against their parents will.

Kiswana and he mother was not seeing eye-to-eye. Her mother did not want her to live in the poor community, but Kiswana has her mind set on being there with her people. She picks to live in a poor area of town, because she is trying to retaliate from the oppressions of the government and her families’ standards. In the beginning of the story, she sees her mother as distant and different. She believes that her mother is a sell out to her African heritage. Her mother assures her that she and Kiswana’s father are as concerned about the poor as much as she is. She also explains that they do not have to live in Brewster Place to prove themselves to anyone. She cautions Kiswana that the long-awaited revolution will not materialize because society has moved to another phase. Instead, she suggests Kiswana to work within the system by becoming an assemblywoman or a civil liberties lawyer or by opening a freedom school in the neighborhood. She provides Kiswana with various ways of using her talents instead of allowing them to waste away in dead-end jobs.

As Kiswana and her mother continue to argue about her new life in the poor area of town, it confirms all of Kiswana’s expectations of her mother’s disapproval. When her mother tells her she lives in a world of fantasy, Kiswana says that she is proud of her heritage and accuses her mother of being “a white man’s nigger who’s ashamed of being black”. Her mother then became angry with Kiswana and started to tell her about her family history. Yet after her mother explains her beliefs and concerns about her family, Kiswana begins to see the similarities between herself and her mother. After Mrs. Browne gave Kiswana a lesson about her family, she took off her shoe because they were hurting her feet. Bright red nail polish glared at Kiswana through the stockings. Her mother never really wore nail polish, but her husband talked her into. In the beginning of the story, Kiswana talked about how her friend was a foot man and how often she changed the color of her polish. Kiswana then thought, “I’ll be damned the young woman thought, feeling her whole face tingle. Daddy’s into feet! And she looked at the blushing woman on her couch and suddenly realized that her mother had trod through the same universe that she herself was now traveling. Kiswana was breaking no new trails and would eventually end up just two feet away on that couch. She stared at the woman she had been and was to become.” She learns that she is more like her mother than she ever imagined. Mothers and daughters go through situations similar to this a lot. The child thinks that they know everything, and things are to be done their way. They are not always right. Some individuals think that their parents are always against them and that they do not care about what they are doing in their life, but most of the time they are wrong. Some individuals also think that their parents have not gone through the things that they are going through, but some parents do. There is a saying “The apple does not fall far from the tree” and “Like Mother, Like Daughter.” More than likely, you will act somewhat like your mother or father; you may also go through things that they went through. You never know. 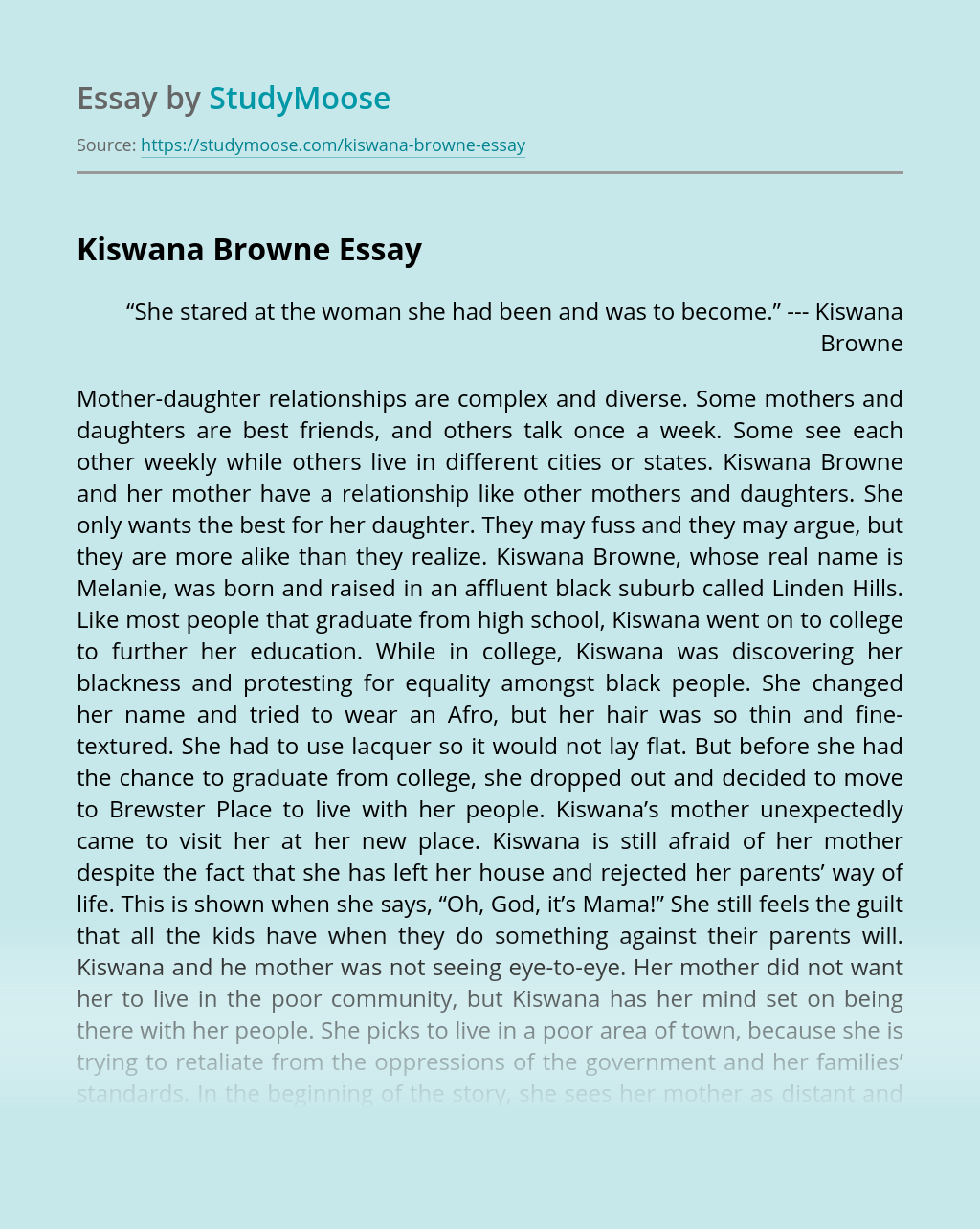