Most parents expect many things from their children but most importantly wish their children to be successful and happy, but parents hold different expectations based on their child’s gender. The expectations that both mothers have are common because both of them have daughters. These differences in expectations of gender can be seen in literature such as Girl by Jamaica Kincaid where she will list everything a women is expected of doing in the house and in Where Are You Going, Where Have You Been? by Joyce Carol Oates, the mother argues with her daughter to be more like her sister which is portrayed to be perfect.

In Girl we can tell her mother is listing what her daughter is expected to do in the house to become the perfect housewife and she must also act a certain way into becoming a lady. In Where Are You Going, Where Have You Been? Connie’s mother always compares her to her sister June; the mother favors June over Connie and wants her to be more like her sister. June is everything her mother wants in a daughter while Connie is not. “A traditional gender role orientation emphasizes differences between men and women and assumes that each sex has a natural affinity to particular behaviors.

Those who maintain a traditional gender role orientation are likely to be influenced by the rules and rituals of the generations that came before them, by their parents and grandparents” (Blackstone 335).

This quote from Amy Blackstone explains that gender roles are affiliated with previous generations of the family, which can indicate that the mothers are passing down to their daughters what they have learned from their childhood with their own mothers. Mothers often want their daughters to follow their footsteps and have certain types of criteria that have to be met by them. In most cases, this creates a communication barrier between the two and often leading them to have conflict among their relationship. We see this happening more in the literature of Girl when her mother states “ this is how you iron your father’s khaki pants so that they don’t have a crease… this is how you sweep a corner; this is how you sweep a whole house; this is how you sweep a yard” (Kincaid 47).

The mother teaches her daughter how to iron and clean the way she knows how to, implicating that she must follow her mothers footsteps because this is the right way and that she must do it when one day she gets married or has a house. But not all daughters have the same opinions as their mothers, which can result in having a communication barrier as we can see in Where Are You Going, Where Have You Been? the story states “Connie’s mother kept picking at her until Connie wished her mother was dead and she herself was dead and it was all over.” (Oates 324). Connie’s mother picks on her daughter so much in the story that it makes Connie not want to have any relationship with her mother by wishing both of them death. According to Estherann Grace who has a masters degree in adolescent medicine said, “The strength of the mother/daughter bond contributes to the intensity of the emotional response both negatively and positively.

This closeness stems somewhat from the expected psychological identification of a developing adolescent becoming a woman, following in her mother’s footsteps. The teenager needs to clarify the differences to establish her own identity.” (Grace 414) In order to solve their differences Connie needs to talk to her mother about the problems they both have and talk to each other about their point of views and figure out the underlying message why her mother and her don’t get along. Both mothers from the short stories show tough love for their daughters as one of their parenting techniques. For Girl the mother tells her daughter “on Sundays try to walk like a lady and not like the slut you are so bent on becoming” (Kincaid 47), she tells this to her daughter because she secretly cares about how her daughter will turn out to be as a woman. The mother uses a form of reverse psychology so her daughter can prove her wrong that she will not become a slut that her mother thinks she will become.

In Where Are You Going, Where Have You Been? her mother proclaims to Connie saying “Why don’t you keep your room clean like your sister? How’ve you got your hair fixed- what the hell stinks? Hair spray? You don’t see your sister using that junk.” (Oates 323) The mother complains to Connie to her because she wants her to become just like her older daughter since she seems to believe that her oldest became successful and that Connie is doing the complete opposite of the mother’s expectations. But in Connie’s point of view she rebels to being anything like her sister because she has her own personality and doesn’t want to follow someone else’s footsteps. According to Gregory Patterson “Kids need more parental involvement. Whether it’s in setting high expectations and then holding children accountable, or by being closely and continuously involved as you set and hold high standards.”(Patterson 4)

With this being said, Patterson would approve of the relationships that both mothers have with their daughters because it makes the parent become more involved with their children lives since its giving the child to hold high expectations of the parent which later on will lead to positive outcomes to the child. Although these mothers have unique ways of parenting, other parents might say this type of parenting can result of psychological abuse to their daughters. Psychological abuse is the parent’s behavior that can aggressively harm their child’s mental health (McCoy and Keen 123). We can see this psychological abuse for both literatures, in Girl her mother refers to the daughter to be turning into a slut, which will deliberately hurt the daughter’s feelings.

Where Are You Going, Where Have You Been? the mother tells Connie to stop acting like she’s pretty because she’s not. Connie states that these words are familiar to her indicating that her mother verbally attacks her often which results into a psychological abuse. As stated by Monica McCoy and Stefanie Keen, “parents with good intentions may become verbally aggressive…whether the parent deliberately ignored the child, intended to harm the child with harsh words, or behaved out of ignorance.” (McCoy and Keen 125) The quote explains that even parents who have good intentions to their child can still accidently harm them with harsh words that can cause the psychological abuse towards the children.

In conclusion, mothers expect more from their daughters to succeed in life with what the mother has provided to them varying from everyday life to academics and also by satisfying gender roles that society has made for women. While some of these gender roles can be protested by their daughters, it will most likely create communication barriers between their mothers relationship and cause several problems between the two. As a parenting technique both the mothers have portrayed themselves as very harsh and heartless mothers but in all realty this points out that they have good intentions for being so strict on their daughters. Both mothers use though love in their parenting to show what their daughters are expected of and to hopefully guide their daughters in life with what the mother has taught them. 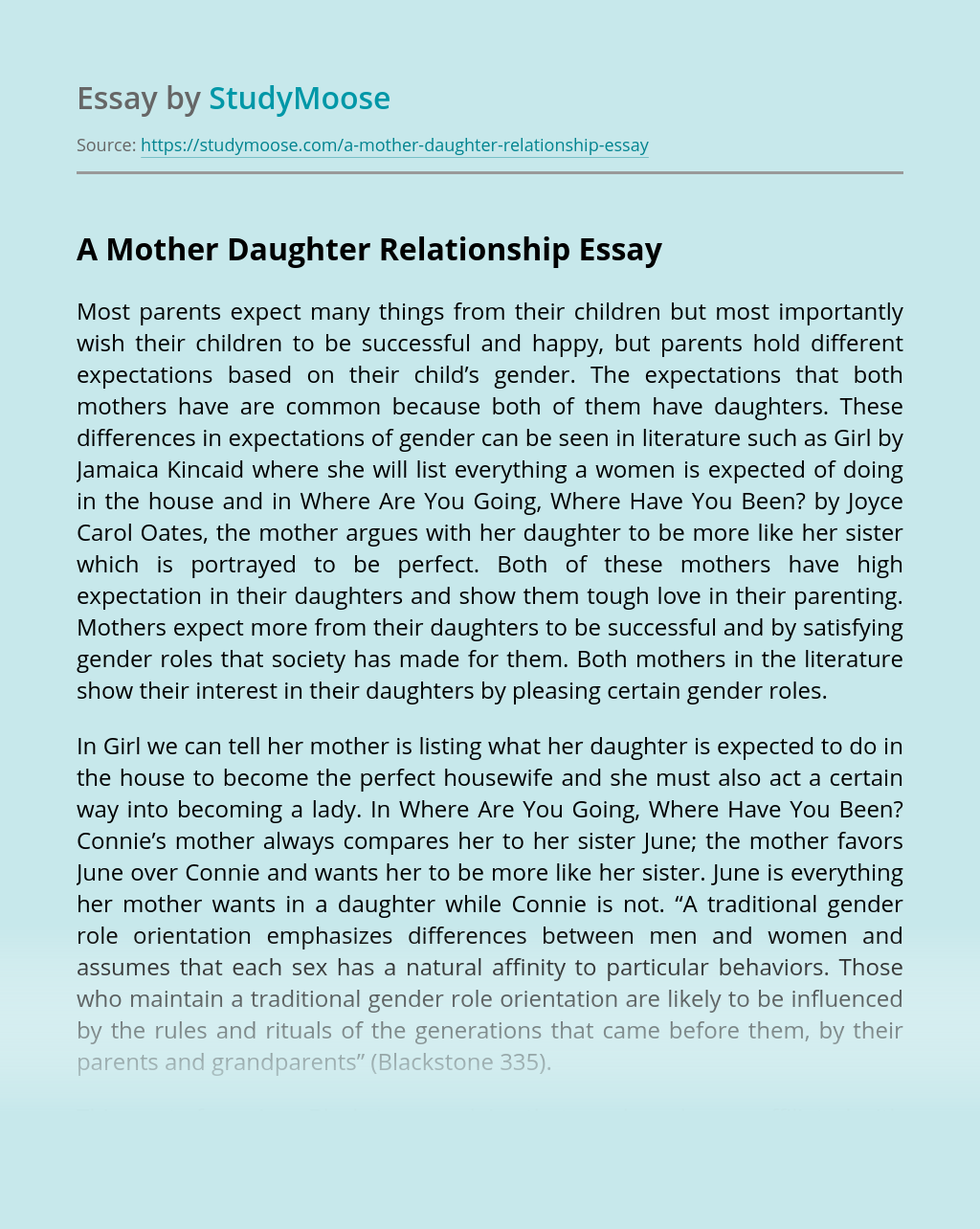 Don’t waste time
Get a verified writer to help you with A Mother Daughter Relationship
Hire verified writer
$35.80 for a 2-page paper
Stay Safe, Stay Original