“To a Daughter Leaving Home” by Linda Pastan

The poem “To a Daughter Leaving Home” (by Linda Pastan) is a very emotional poem about what you can assume: a daughter leaving home. The voice in the poem is of a parent who seeks to explain how special times can be, and how easily a daughter can be lost. In this case the special time is the time when the parent was teaching the daughter how to ride a bicycle when she was eight in a park. This poem’s deeper story is about the life of the daughter and how quick the daughter’s life went by until they say goodbye.

Don't use plagiarized sources. Get your custom essay on
“ “To a Daughter Leaving Home” by Linda Pastan ”
Get custom paper
NEW! smart matching with writer

This poem is addressed to “a Daughter Leaving Home” and the poem is written to make the daughters that are leaving their homes, reflect upon their own lives, how they have gone through them and how they have kept in touch with their parents. In this poem poetic devices help translate this story into the actual message. In the poem the parent goes beside the daughter as she rides her bicycle, and the daughter “wobbled away”.

This example of imagery has generated an image of the daughter not in full control of how she is riding the bicycle. As she goes the parent is surprised to see that the daughter has gone down a “curved path of the park”. The poet Linda Pastan has used “curved path” as symbol to represent life. Linda Pastan has used a “curved path” to symbolize life as a fun, dangerous and unpredictable path that is not does not go in one straight line.

“I kept waiting for a thud of crash” this quotation can tell us that the parent is worried and panicked about the daughter getting hurt, which in this situation seems likely. The parent goes sprinting after the daughter. “Smaller, more breakable” This quotation is explaining how the daughter in the parent’s eyes is fragile. Also the daughter is not in reach with the father. But the daughter continues to go independently on her bicycle “pumping, pumping”. She goes on with her life “screaming with laughter”.

“To a Daughter Leaving Home” by Linda Pastan. (2016, Dec 14). Retrieved from https://studymoose.com/to-a-daughter-leaving-home-by-linda-pastan-essay 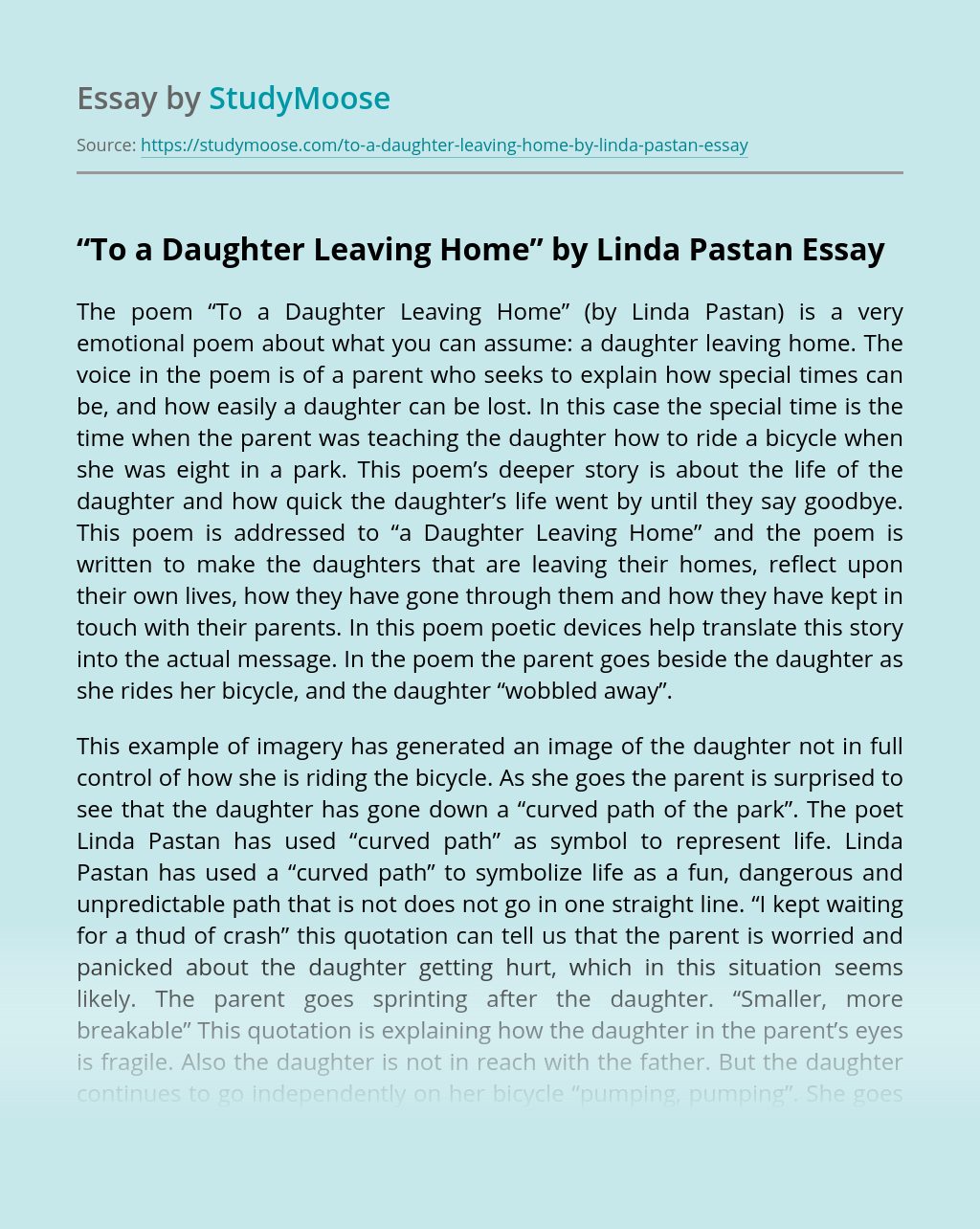