The text I’m going to analyze is “Shepherd’s Daughter” by William Saroyan. As an immigrant he lived and died in America being noted several times for his great work seasoned with gentle humor.. He even got awarded(but didn’t accept) the Pulitzer Prize. Features of American and much older Armenian cultures and their interaction have effected his works. The story starts like a piece of autobiography, told on behalf of a 1st person singular, as the author introduces his grandmother as a women, who thinks “Every man should know how to craft, create something that can be touched, used”.

Without paying any attention to describing his grandmother’s appearance, the author immediately proceeds to the story his grandmother wants to tell him in order to back her ideas about manhood. It turned out to be the story involving the actual “shepherd’s daughter”. The story is told in way like a fairytale. There was a Persian prince who fell in love with shepherd’s daughter.

Without any regards for his father’s will, he was determined to have her be his wife, so he had told his father. The King took the notion of that love as God’s sign, so he accepted it and sent a messenger to shepherd’s daughter to inform her about his son’s intentions.

The only condition of hers was for Prince to learn to do labor, because she had been convinced of that a man should know how to craft. Prince took the news well and decided to learn how to weave straw rugs.

Having been impressed by the king son’s work, after three days she married him. Time past, and one day king’s son was walking in the streets of Baghdad when he saw this clean and neat eating place. When he walked in to sit there, it tuned out it had been the place of “thieves and murderers”, so got captured. Being held captive, he told his kidnappers that he is a straw rug weaver, but a very good one. So they gave him all the materials and after three days he weaved 3 rugs, followed by telling the bandits that if they took these rugs to the king’s palace, he would have gotten them a lot of gold for those rugs. What the thieves and murderers didn’t know is that Prince had lined rugs with the message for help, and only when the bandits gave those rugs to the king and the princess, she had been able to see the message.

The King sent many soldiers to the place his son described in the message, and they rescued him. He returned back to his wife and expressed his gratefulness. As this story ended, proving grandmother’s point, the narrator agreed with her and promised to learn how to labor as soon as he gets a tool of some kind. Interestingly, “Shepherd’s Daughter” is a story inside a story. And if we speak about the characters, we can’t say much about the narrator or the grandmother(besides the fact, that she is of traditional ideas) as opposed to characters in her story. Prince is the protagonist of the story, he is ready for any deeds in the name of love he has for shepherd’s daughter.

He learns to labor, even though it’s not what he is supposed to do as king’s son. He is a brave and witty man, which the message-on-the-rugs idea illustrated well. And he is modest and full of honor, which is reflected in his return to the palace and how he thanked and cherished his lady for the salvation. All of the characters including him are the subjects of indirect characterization. The flat characters the king and shepherd’s daughter are presented through their actions, but there is little we could say about them.

The language of the story is very simple, full of repetitions and what draws our attention: is also told on behalf of 1st person singular. The author’s writing style could be described here as ironic and humorous. Regardless of the satire, the story carries a simple but a very bright idea about what is one of the most important things men should know how to do. The point raised by grandmother in the beginning is proved by her and agreed to by the end. Also there is a possibility, that “grandmother” actually was “shepherd’s daughter” herself. And this is the reason why she seems so upset with the narrator not being able to do any kind of labor. I would definitely recommend this story to anyone. It is entertaining, interesting and well structured. 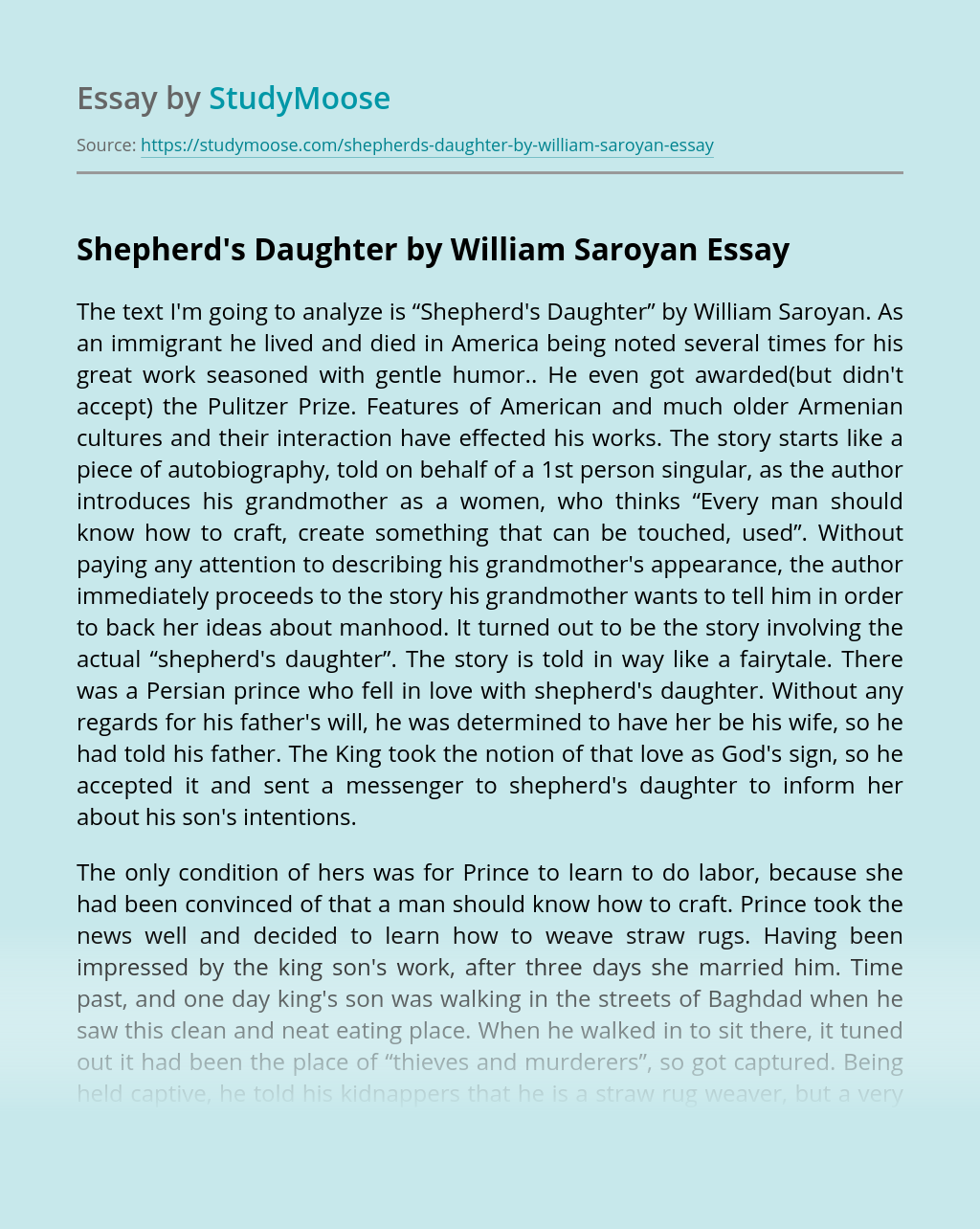