Short Story About My Grandmother

My grandmother gave me bad advice and good advice when I was in my early teens. For the bad advice, she said that I should become a barber because they made good money and listened to the radio all day. “Honey, they don’t work como burros,” she would say every time I visited her. She made the sound of donkeys braying. “Like that, honey!” For the good advice, she said that I should marry a Mexican girl. “No Okies, hijo”—she would say— “Look, my son.

Don't use plagiarized sources. Get your custom essay on
“ Short Story About My Grandmother ”
Get custom paper
NEW! smart matching with writer

He marry one and they fight every day about I don’t know what and I don’t know what.” For her, everyone who wasn’t Mexican, black, or Asian were Okies. The French were Okies, the Italians in suits were Okies. When I asked about Jews, whom I had read about, she asked for a picture. I rode home on my bicycle and returned with a calendar depicting the important races of the world.

“Pues si, son Okies tambien!” she said, nodding her head. She waved the calendar away and we went to the living room where she lectured me on the virtues of the Mexican girl: first, she could cook and, second, she acted like a woman, not a man, in her husband’s home. She said she would tell me about a third when I got a little older.

I asked my mother about it—becoming a barber and marrying Mexican. She was in the kitchen. Steam curled from a pot of boiling beans, the radio was on, looking as squat as a loaf of bread.

“Well, if you want to be a barber— they say they make good money.” She slapped a round steak with a knife, her glasses slipping down with each strike. She stopped and looked up. “If you find a good Mexican girl, marry her of course.” She returned to slapping the meat and I went to the backyard where my brother and David King were sitting on the lawn feeling the inside of their cheeks.

“This is what girls feel like,” my brother said, rubbing the inside of his cheek. David put three fingers inside his mouth and scratched. I ignored them and climbed the back fence to see my best friend, Scott, a second-generation Okie. I called him and his mother pointed to the side of the house where his bedroom was a small aluminum trailer, the kind you gawk at when they’re flipped over on the freeway, wheels spinning in the air. I went around to find Scott pitching horseshoes.

I picked up a set of rusty ones and joined him. While we played, we talked about school and friends and record albums. The horseshoes scuffed up dirt, sometimes ringing the iron that threw out a meager shadow like a sundial. After three argued-over games, we pulled two oranges apiece from his tree and started down the alley still talking school and friends and record albums. We pulled more oranges from the alley and talked about who we would marry. “No offense, Scott,” I said, with an orange slice in my mouth, “but I would never marry an Okie.” We walked in step, almost touching, with a sled of shadows dragging behind us. “No offense, Gary,” Scott said, “but I would never marry a Mexican.” I looked at him: a fang of orange slice showed from his munching mouth. I didn’t think anything of it. He had his girl and I had mine.

But our seventh-grade vision was the same: to marry, get jobs, buy cars and maybe a house if we had money left over.26 The Short Story We talked about our future lives until, to our surprise, we were on the downtown mall, two miles from home. We bought a bag of popcorn at Penneys and sat on a bench near the fountain watching Mexican and Okie girls pass. “That one’s mine,” I pointed with my chin when a girl with eyebrows arched into black rainbows ambled by. “She’s cute,” Scott said about a girl with yellow hair and a mouthful of gum. We dreamed aloud, our chins busy pointing out girls. We agreed that we couldn’t wait to become men and lift them onto our laps.

But the woman I married was not Mexican but Japanese. It was a surprise to me. For years, I went about wide-eyed in my search for the brown girl in a white dress at a dance. I searched the playground at the baseball diamond. When the girls raced for grounders, their hair bounced like something that couldn’t be caught. When they sat together in the lunchroom, heads pressed together, I knew they were talking about us Mexican guys. I saw them and dreamed them. I threw my face into my pillow, making up sentences that were good as in the movies.

But when I was twenty, I fell in love with this other girl who worried my mother, who had my grandmother asking once again to see the calendar of the Important Races of the World. I told her I had thrown it away years before. I took a much-glanced-at snapshot from my wallet. We looked at it together, in silence. Then grandma reclined in her chair, lit a cigarette, and said, “Es pretty.” She blew and asked with all her worry pushed up to her forehead: “Chinese?” I was in love and there was no looking back. She was the one. I told my mother who was slapping hamburger into patties. “Well, sure if you want to marry her,’ she said. But the more I talked, the more concerned she became. Later I began to worry. Was it all a mistake? “Marry a Mexican girl,” I heard my mother say in my mind. I heard it at breakfast.

I heard it over math problems, between Western Civilization and cultural geography. But then one afternoon while I was hitchhiking home from school, it struck me like a baseball in the back: my mother wanted me to marry someone of my own social class—a poor girl. I considered my fiancee, Carolyn, and she didn’t look poor, though I knew she came from a family of farm workers and pull-yourself-upby-your-bootstraps ranchers. I asked my brother, who was marrying Mexican poor that fall, if I should marry a poor girl. He screamed “Yeah” above his terrible guitar playing in his bedroom. I considered my sister who had married Mexican. Cousins were dating Mexican. Uncles were remarrying poor women. I asked Scott, who was still my best friend, and he said, “She’s too good for you, so you better not.”

I worried about it until Carolyn took me home to meet her parents. We drove in her Plymouth until the houses gave way to farms and ranches and finally her house fifty feet from the highway. When we pulled into the drive, I panicked and begged Carolyn to make a U-turn and go back so we could talk about it over a soda. She pinched my cheek, calling me a “silly boy.” I felt better, though, when I got out of the car and saw the house: the chipped paint, a cracked window, boards for a walk to the back door. There were rusting cars near the barn. A tractor with a net of spiderwebs under a mulberry. A field. A bale of barbed wire like children’s scribbling leaning against an empty chicken coop. Carolyn took my hand and pulled me to my future mother-in-law, who was coming out to greet us.

We had lunch: sandwiches, potato chips, and iced tea. Carolyn and her mother talked mostly about neighbors and the congregation at the JapaneseThe Short Story 27 Methodist Church in West Fresno. Her father, who was in khaki work clothes, excused himself with a wave that was almost a salute and went outside. I heard a truck start, a dog bark, and then the truck rattle away. Carolyn’s mother offered another sandwich, but I declined with a shake of my head and a smile. I looked around when I could, when I was not saying over and over that I was a college student, hinting that I could take care of her daughter. I shifted my chair. I saw newspapers piled in corners, dusty cereal boxes and vinegar bottles in corners.

The wallpaper was bubbled from rain that had come in from a bad roof. Dust. Dust lay on lamp shades and window sills. These people are just like Mexicans, I thought. Poor people. Carolyn’s mother asked me through Carolyn if I would like a sushi. A plate of black and white things were held in front of me. I took one, wide-eyed, and turned it over like a foreign coin. I was biting into one when I saw a kitten crawl up the window screen over the sink. I chewed and the kitten opened its mouth of terror as she crawled higher, wanting in to paw the leftovers from our plates. I looked at Carolyn who said that the cat was just showing off. I looked up in time to see it fall. It crawled up, then fell again.

We talked for an hour and had apple pie and coffee, slowly. Finally, we got up with Carolyn taking my hand. Slightly embarrassed, I tried to pull away but her grip held me. I let her have her way as she led me down the hallway with her mother right behind me. When I opened the door, I was startled by a kitten clinging to the screen door, its mouth screaming “cat food, dog biscuits, sushi….” I opened the door and the kitten, still holding on, whined in the language of hungry animals. When I got into Carolyn’s car, I looked back: the cat was still clinging. I asked Carolyn if it were possibly hungry, but she said the cat was being silly.

She started the car, waved to her mother, and bounced us over the rain-pocked drive, patting my thigh for being her lover baby. Carolyn waved again. I looked back, waving, then gawking at a window screen, where there were now three kittens clawing and screaming to get in. Like Mexicans, I thought. I remembered the Molinas and how the cats clung to their screen— cats they shot down with squirt guns. On the highway, I felt happy, pleased by it all. I patted Carolyn’s thigh. Her people were like Mexicans, only different.

Short Story About My Grandmother. (2017, Jan 09). Retrieved from http://studymoose.com/short-story-about-my-grandmother-essay 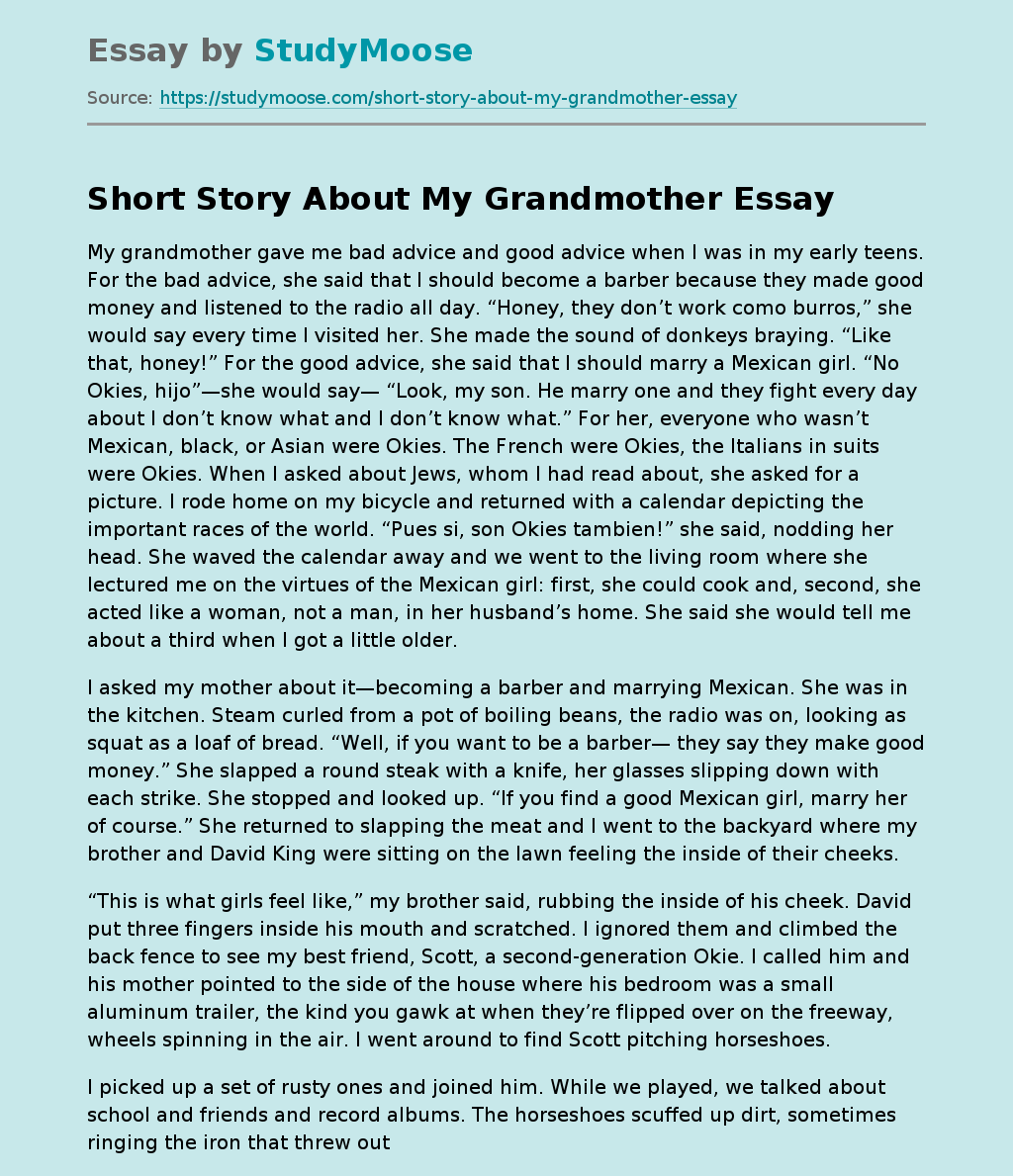