Beowulf: A Comparison between Hrothgar and Beowulf

Throughout history, kings have been the primary figure in kingdoms and territories. People looked to these authoritative figures for many different things ranging from religion to leadership and guidance. The heroic epic Beowulf takes the concept of kingship and elaborates on it through the roles of two very different characters: King Hrothgar and Beowulf. In doing so, it reveals the differing values instilled within each man.

Very early on in Beowulf, it is evident that the German and Scandinavian world that exists at this time is both hostile and unpredictable.

Don't use plagiarized sources. Get your custom essay on
“ Beowulf: A Comparison between Hrothgar and Beowulf ”
Get custom paper
NEW! smart matching with writer

The constant upheaval between the differing cultures force the people of these villages to look to a higher power for a sense of well-being. King Hrothgar of Heorot embodies the necessary characteristics of a leader at the beginning of the tale: strength, bravery, and leadership. The introduction of Grendel, however, eliminates any sense of stability in the King of the Danes. Instead of standing up to fight Grendel, Hrothgar cowardly retreats and allows the monster to terrorize and pillage his kingdom for many years.

As a result of this, the people lose their sense of trust and security. It is at this point that they place their belief in pagan rituals, turning their backs on God.

Beowulf, the hero of this epic, demonstrates what a hero truly represents. He first and foremost places his trust in God rather than in other humans or pagan rituals. His strength, bravery, and self-sacrifice shine through his underlying persistent optimism.

This drive stems from Beowulf’s ultimate goal of being remembered after he is long gone and time has passed.

As he tells Hrothgar, “We must all expect and end to life in this world; let him who can win fame before death, because that is a dead man’s best memorial.”

When Beowulf hears of the turmoil Grendel is causing in Heorot, he immediately responds to the call, against his father’s wishes. He determines that he will fight the creature without any weapon or armor. This confidence only demonstrates his faith in God and fate. He believes that if something happens, it will happen, and there is no way of preventing the inevitable. Beowulf’s fight with Grendel represents the beginning of his journey as a hero. Grendel is the most evil foe for Beowulf, because he is a direct descendant of Cain. Beowulf’s character through this difficult first task establishes a foundation for him to build on with each increasingly arduous task.

After having defeated Grendel, Heorot once again returns to a peaceful and serene place. The halls within the Danish kingdom grow joyous and jovial. All of this jollity quickly dissipates, however, when Grendel’s mother begins murdering and ravaging the town in a fit of rage over her son’s death. This is the second struggle that Beowulf is faced with. In this particular situation, he is forced to travel into a hostile environment down into the mother’s lair. This second act of heroism shows how Beowulf goes one step further in securing his place as a genuine hero. When he defeats the mother with a sword that he did not come equipped with, it becomes very clear that divine intervention makes up a large part of his success.

Once Grendel’s mother is defeated, peace is once again restored in the Danish kingdom. Fifty long years pass before any other major act of heroism occurs in Beowulf’s life. During this time, he becomes King of the Geats, and establishes himself as a great ruler. When a dragon interrupts the tranquility of the kingdom, Beowulf truly secures his place as a legend. Unlike King Hrothgar, Beowulf does not shy away from danger, and aggressively pursues the dragon. This is by far the most difficult task Beowulf faces and he soon realizes it. Not only is the beast more powerful and dangerous than its predecessors, Beowulf is now an old man and does not possess the strength and energy that so freely flowed through him as a younger man.

The twelve “companions” that accompany Beowulf on this quest desert him in the face of danger, except for Wiglaf, the only true and loyal servant. These cowards can be looked at in much the same light as King Hrothgar. They act brave and mighty, but when confronted with real danger and risk, coward away. All of these factors combine to ultimately defeat Beowulf. He defeats the dragon, but dies in doing so. Even as he dies, Beowulf exudes his humbleness and faithfulness to God and the people he watched over. “I speak with words of thankfulness to God the king of glory,
our eternal Lord, for all the wealth that I see here, and because I was permitted to win it for my people before my death.”

Countless times in history, people are faced with tough decisions that unknowingly affect an entire society. It is how these people respond to these situations that truly reveal their character. Attempting to hide or run away does not solve the problem, much to the dismay of people like King Hrothgar. If anything can be learned from this, I think it is that when we are faced with these decisions in life, we must trust in what we firmly believe in and fully put our reputation or life on the line. In doing so, we too have the ability to become heroes in our own right, whether it be a controversial choice or just something very simple. By focusing on the same principles as Beowulf did, we can affect the society around us as well.

Beowulf: A Comparison between Hrothgar and Beowulf. (2016, Jul 15). Retrieved from https://studymoose.com/beowulf-a-comparison-between-hrothgar-and-beowulf-essay 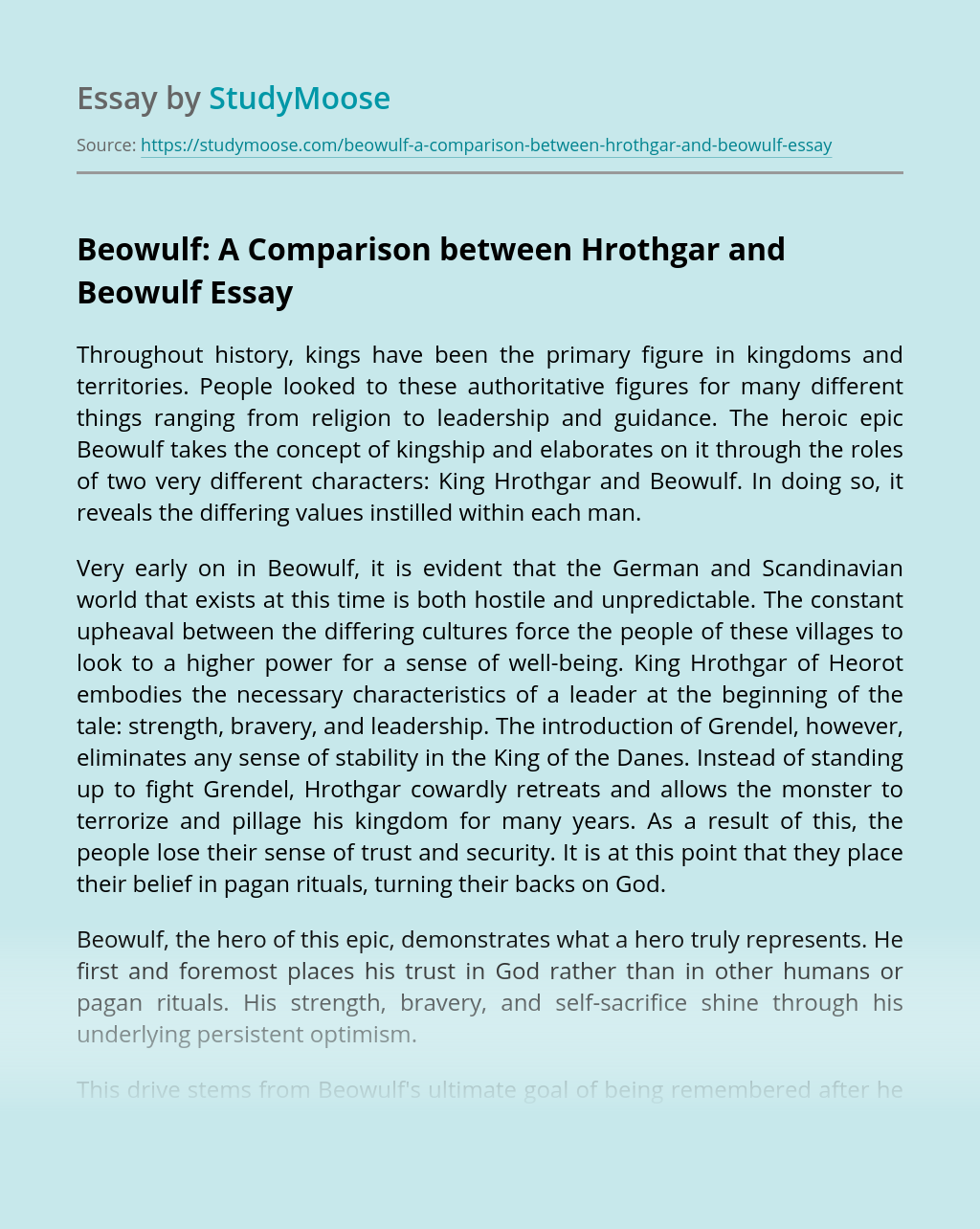