Archetypes stir profound emotions in the reader because they awaken images stored in the collective unconscious. In Seamus Haney’s translation of Beowulf this is used in the form of character types. Beowulf is a hero and encounters many triumphs with different types of people on his journey in this epic poem. There are three archetypal characters in Beowulf that are particularly effective and intriguing. These are The Creature of Nightmare Grendel, The Mentor Hrothgar, and The Loyal Retainer Wiglaf. The characters are common experiences in the human psyche.

Don't use plagiarized sources. Get your custom essay on
“ Archetypes in Beowulf ”
Get custom paper
NEW! smart matching with writer

The Creature of Nightmare is a monster from the deepest darkest part of the human psyche. Throughout Beowulf, Grendel’s actions and description accurately fits the archetype. The vivid language used in the poem illustrates Grendel as a monster. “The God-cursed brute was creating havoc:/greedy and grim he grabbed thirty men/from their resting places…/ (121-123)”. He’s also depicted as “a fiend out of hell/ (100)”. This passage acts as an illustration of the archetype in the poem because a demon that steals lives at a peaceful hour is what would happen in a nightmare.

Grendel shares similarities with another dark creature from literature, Poseidon.

He is known through Greek mythology as an almighty god but also is a monster. In the myth of Medusa, Poseidon took medusa’s virginity forcefully in the temple of Athena, had the blame put on her, and she was terribly punished. The acts he committed were iniquitous. What makes this archetype particularly effective and intriguing is the fact that these monsters are real; except they aren’t in the form of a nightmare or make believe gods.

In addition to the Creature of Nightmare there is the Mentor. This individual acts as a teacher or consoler to the initiate. The fit for this archetype is Hrothgar. For the duration of the novel, he acts as role model to Beowulf consoling him to achieve greatness. Hrothgar depicts this archetype when he talks to Beowulf about life and how to be a good king. He says “…understand true values. / I who tell you have wintered into wisdom. / (1724-1725)” and “Do not give way to pride. / for a brief while your strength is in bloom but it fades quickly…”. Being a mentor requires experience so that wisdom can be bestowed onto another and that something is learned. He undoubtedly does this for Beowulf. Hrothgar can be compared to another character in literature.

This character is Hagrid from Harry Potter. It’s easy to overlook him but Hagrid turns out to be Harry’s rescuer and first real friend. He’s the first person to take Harry’s side in anything, and he is the first real impression that Harry gets of the wizard world, aside from the letters. Harry makes use of relying on friendship throughout all of the books thanks to Hagrid. These details make him an exemplary example of a mentor. The Mentor archetype is effective and intriguing because people still have mentors by their side in the form of a mother, father, friend, teacher, or other guiding them through life. Lastly, there is The Loyal Retainers. These people are very important as they are usually a sidekick who has a duty to protect and reflect the nobility of the hero. Beowulf’s sidekick is Wiglaf. He comes at the end of Beowulf and is the only warrior who stays and helps Beowulf defeat the dragon, “No help or backing was to be had then/ from his high-born comrades; that hand-picked troop/ … ran for their lives…/but within one heart sorrow welled up/ (2597-2600)”. He also stays with Beowulf when his last breath is taken. Wiglaf gets this archetype because he protected the hero, Beowulf. He shares very similar qualities with Ponyboy from The Outsiders.

He is the main character but when his friend, Johnny, kills someone Ponyboy runs away with him staying by Johnny’s side till he died even though he could have let Johnny get in trouble by himself. Ponyboy protected Johnny and stood by his side. The archetype, Loyal Retainer, is effective and intriguing because there’s always somebody that is there for another person in life to protecting them and be loyal. Archetypes are persuasive in the epic poem Beowulf. The Creature of Nightmare, The Mentor, and The Loyal Retainer are common experiences in the human psyche. These archetypes can be connected to other literature. They can also be connected to life. The ideas in this essay matters to the world because as according to Carl Jung people from all over the world respond to certain myths or stories in the same way not because everyone knows the same story but because lying deep in our collective unconsciousness are the racial memories of humanity’s past. These memories exist in the form of archetypes.

Archetypes in Beowulf. (2016, May 21). Retrieved from https://studymoose.com/archetypes-in-beowulf-essay 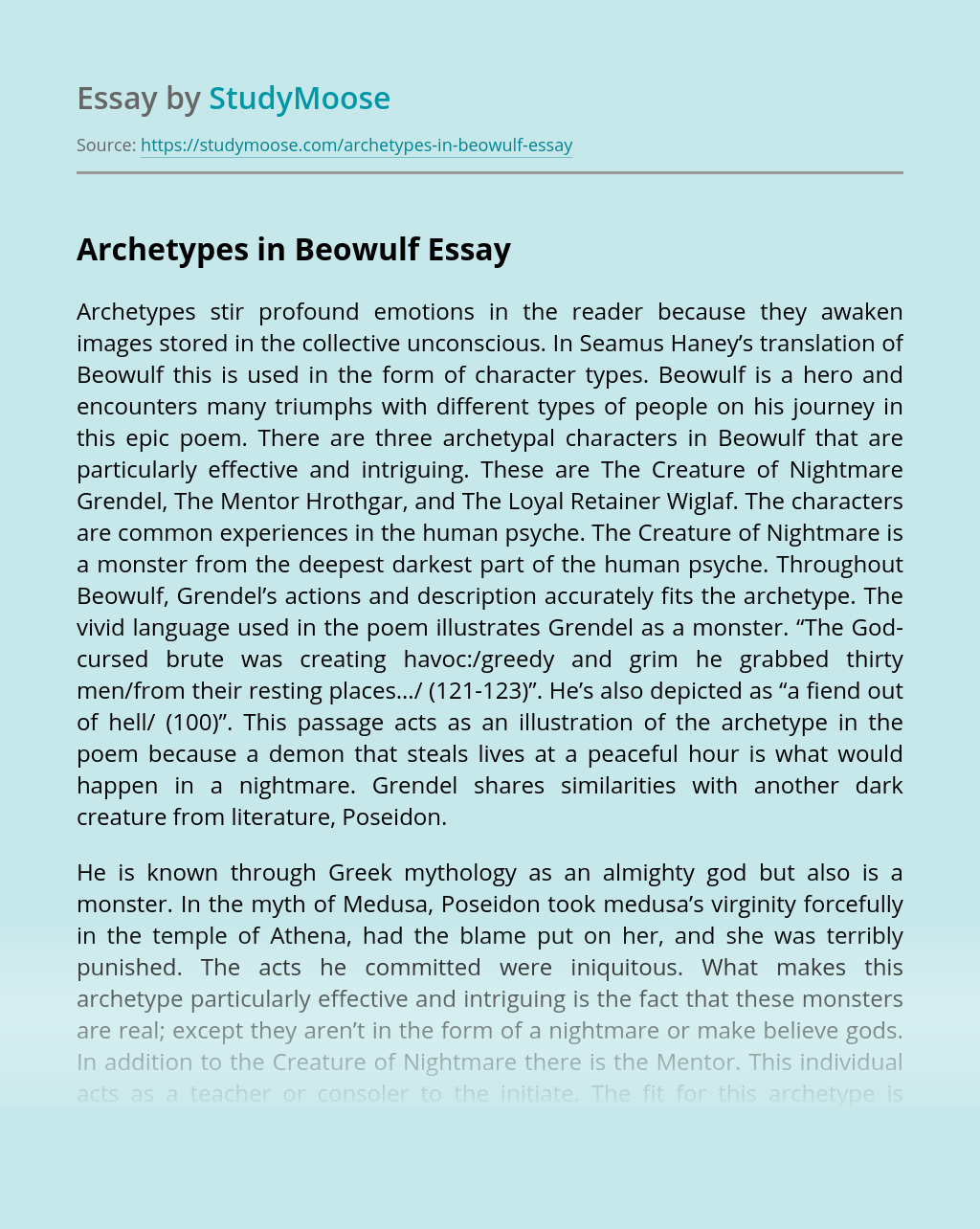