Themes of The Crucible that makes it enduring and universal

Themes of The Crucible that makes it enduring and universal

In every literary work, themes are presented. Theme can be defined as comprehensive moral, message or idea of a narrative, story or a book but representation of themes differs from one writer to the other. “The crucible” is a play about the society of Salem witch prosecution that happened in Massachusetts in 1962 authored by Arthur Miller. On the apparent, this historical play has limited enduring and universal themes. A theme is considered universal when the ideas still to everyone and also understood regardless of where it is while a theme is referred enduring if the ideas can be referenced in modern times and in ancient times.

Don't use plagiarized sources. Get your custom essay on
“ Themes of The Crucible that makes it enduring and universal ”
Get custom paper
NEW! smart matching with writer

“The crucible” was published long ago and still it is being read all over the world currently. Themes of empowerment, hysteria and reputation have been analyzed as both enduring and universal.

The first theme analyzed in the play is reputation because many characters are concentrated on maintaining their good name and public reputation.

According to the characters, their reputation and names will, be compromised due to their friend’s iniquities. For example character Revered talks to Williams about the happening with his beloved daughter in the jungle. He tells Williams that there is a group that is under oath to drive him from his pulpit (Miller, 170). He has belief that this weird occurrence with his daughter will devastate his reputation with the society of Salem and this will result to him stepping down from the pulpit.

According to this, it is imperious for one to have a moral reputation since it gives other people a well conclusion. The idea of bad and good reputations will never come to an end as long as the society has people.

Theme of empowerment is the second theme analyzed in this play. Many characters more so women, however, are given power which they never had during the prosecutions in the play. Men are the one supposed to govern women in the society of Salem. For example Abigail Williams has great amount of power with the witch hearings and she was only 17 years old. Abigail responds to Reverend hale by saying that Betty made her to do it because she sends her spirit to her in church and makes her laugh at prayer (Miller 187). Due to this thoughtful accusations, Tituba is caged just because of Abigail accusations. Empowerment in this case is enduring and universal since any person in this universe regardless of what, can unexpectedly have supremacy and this even happen in modern society whereby people have authority and powers over others.

Finally, the theme of hysteria have been developed in this play. Hysteria can be defined as fierce mental distress and it is greatly attributed in the play by shredding the community of Salem apart. Many characters are allowed to assume that their fellow citizens have been supernaturally worshipping the devil. For example Betty awakens from her sleep and yells that she saw George Jacobs with the evil spirit and Abigail adds that she also saw Goody siber with the evil spirit (Miller 189). After the cries, everybody is hysterical and demand for the devil worshippers to be arrested. The theme of hysteria is enduring and universal because the similar thing applies in modern life today, for example the issue of racial profiling. This play retells the listeners that this hysteria about races being different may never come to an end.

The theme of empowerment, hysteria and reputation are both enduring and universal in “The crucible” because these ideas are present all over the world and will continue until the end of mankind. This means in modern life, people are still hysterical to societal matters concerning to racism, people still try to retain reputation in the society and also people achieve power under no circumstances. This play enlighten the readers on how ideas are enduring all over the world.

Themes of The Crucible that makes it enduring and universal. (2015, Nov 01). Retrieved from https://studymoose.com/themes-of-the-crucible-that-makes-it-enduring-and-universal-essay 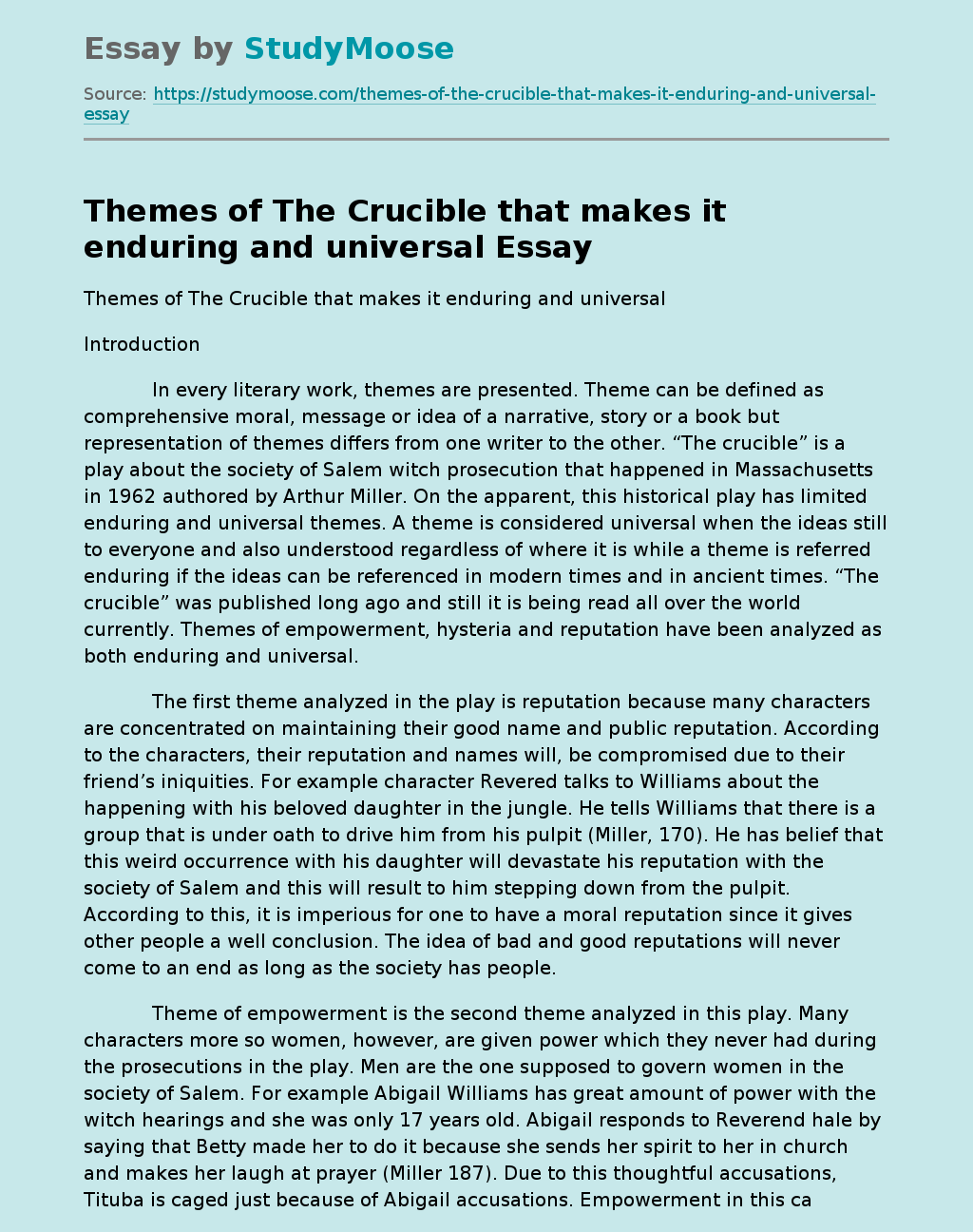