When I was on vacation in San Francisco, the 19:29 Theater Company from London put on the play Blasted, by Sarah Kane.  I knew very little about Kane or her work, but went with a few friends on Monday, June 23.  The play was taking place at the Mossmer Hotel, and we decided to go to the early showing.  Upon hearing people talk about it and seeing some posters, I got a better idea about the kind of experimental play I was about to see.

Don't use plagiarized sources.
Get Your Custom Essay on Blasted by Sarah Kane Just from $13,9/Page

However, I had no idea what I was getting into, and the experience far exceeded my wildest imaginations and the unconventional nature of this play would stay with me long after the final line was spoken.

When we were about to enter the theater, some people were handing out veils to all the audience members with holes cut out for mouths and eyes.  This was interesting at first, but the festive atmosphere created by the initial strangeness of the veils soon gave way to a creeping fear of something heavy about to be parlayed.

We were in essence walking as if to a firing squad, some of us cognizant of what was about to happen, while some of us still laughed at the novelty and the seriousness of the situation.  As soon as the play began, no one was laughing.

Blasted is set in a naturally lit hotel room, with a bed and some furniture and a bathroom that permeated a blue glow.  No programs were given out and the play just began very unceremoniously.  The actor and actress in the hotel room began their dialogue in a style that was very naturalistic and conversational.  The characters are called “Ian” and “Cate,” with Ian an older man and Cate a younger woman.  Ian just swears and speaks racists and bigoted tirades, while Cate seems to shrink from him.  Ian tries to get Cate to make love, but she refuses.  After several attempts and severe stages awkwardness, the scene ends to the sound of rain.

The next scene begins the next day after Ian raped Cate.  After a bit, Cate breaks free from Ian out the bathroom window.  Soon after, a soldier runs into the room and a bomb hits it, leaving the scene to end to the sound of rain.  When the next scene begins, the room is virtually destroyed and there is a large hole in the wall.  The stage is much darker and the light is very sparse.  The soldier explains to Ian about the war going on and the terrible things he has witnessed.  The sound of gunfire can be heard continuously.

The soldier then rapes Ian and blinds him, and like the other scenes it ends with the sound of rain.  During the next scene, Ian is blind and the soldier has killed himself, and Cate returns carrying a dead baby.  She describes what she has seen and buries the baby under a hole the floor before leaving.  The final scene shows Ian slowly deteriorating into madness and despair.  Starving, he crawls into the hole where Cate put the dead baby and eats it.  A voice offstage then says that Ian dies, and the play ends with Cate coming back with some food that she got by having sex with a soldier.

During the play I was simply shocked by the turns it took, as well as the bleakness of what was being portrayed on stage.  Even with actors that may not be the most schooled in theater, the material is so deep and disturbing, and the production is tight, that it almost becomes the perfect play.  It certainly stayed with me long after I saw it, and provoked everything but indifference from everyone that saw it.  I like to think that I had a good idea about what Kane was trying to say, but when it comes down to it, I can only guess that her greater message was that life is absurd.  The violence, perversion, and general human degradation she portrayed in Blasted certainly speaks of the darker side of humanity, but one that certainly exists and seems all too common in much of the world.

Blasted was Sarah Kane’s breakthrough play, and her emergence put the theatre world on its ear in the 1990s.  More than any other recent theatrical event, the plays of Kane shocked the theatre world to the core.  Kane’s debut play, Blasted, created a scandal when it was released.  The play angered many of the critics, but cemented a lasting impression on the world of theatre.  According to playwright Mark Ravenhill: “History has made Kane’s critics look rather foolish.  But, really, who could have said then that Blasted was a landmark in theatre?  In retrospect, we – theatres, audiences, translators, teachers, students, biographers – pick out the good art from the bad until we’re left with some kind of canon.

But in the moment no one can really tell” (Ravenhill).  Its scenes of anal rape, cannibalism, and brutality created the biggest theatre scandal since the baby stoning scene in Bond’s play Saved; Kane admired Bond’s work and he in turn publicly defended Kane’s play and talent (“Sarah Kane”).  Blasted’s merits were recognised by fellow playwright Harold Pinter and it was later generally accepted that the play is not an adolescent attempt to shock, but instead draws parallels between acts of domestic abuse and the war being fought in Bosnia, between emotional and physical violence, and thus confronts audiences with moral challenges rather than amoral shock tactics (“Sarah Kane”).

Kane’s subsequent plays continued to deal with violent sexual desire, cruelty, pain, torture, and death, though without the massive scandal caused by her first play.  She measured human suffering through physical and psychological means, and presented theatre that might be offensive and difficult to watch at times, but overall redemptive.

Her suicide stigmatized her films, but her work continues to transcend theatrical boundaries and national borders.  Theater critic Michael Billington remarked on the success of Kane’s plays around the world:  “If we still find it hard to grasp her in Britain, it is because of her ruthlessly uncompromising vision and total rejection of our naturalistic inheritance. The whirligig of time, however, brings in its revenges – and I suspect, judging by her campus popularity, that the next generation of theatre-makers will intuitively understand her black humour and romantic agony” (Billington).

It seems difficult to place the work of Sarah Kane in the same pantheon as Anton Chekhov and Arthur Miller, if only because they seem the opposite ends of the spectrum, but both playwrights have contributed to the spirit of change and were once considered radical departures from the norm.  As Blasted continues to gain acceptance and grows in popularity, Kane’s place in the canon will be assured, and perhaps she will become a part of conventional theatre, like Chekhov and Miller.  As history dictates, what shocks today is a reaction to yesterday’s conventions, so the possibility exists that plays like those of Sarah Kane become commonplace and conventional, only to be subverted by a new, evolved form of genteel light comedy. 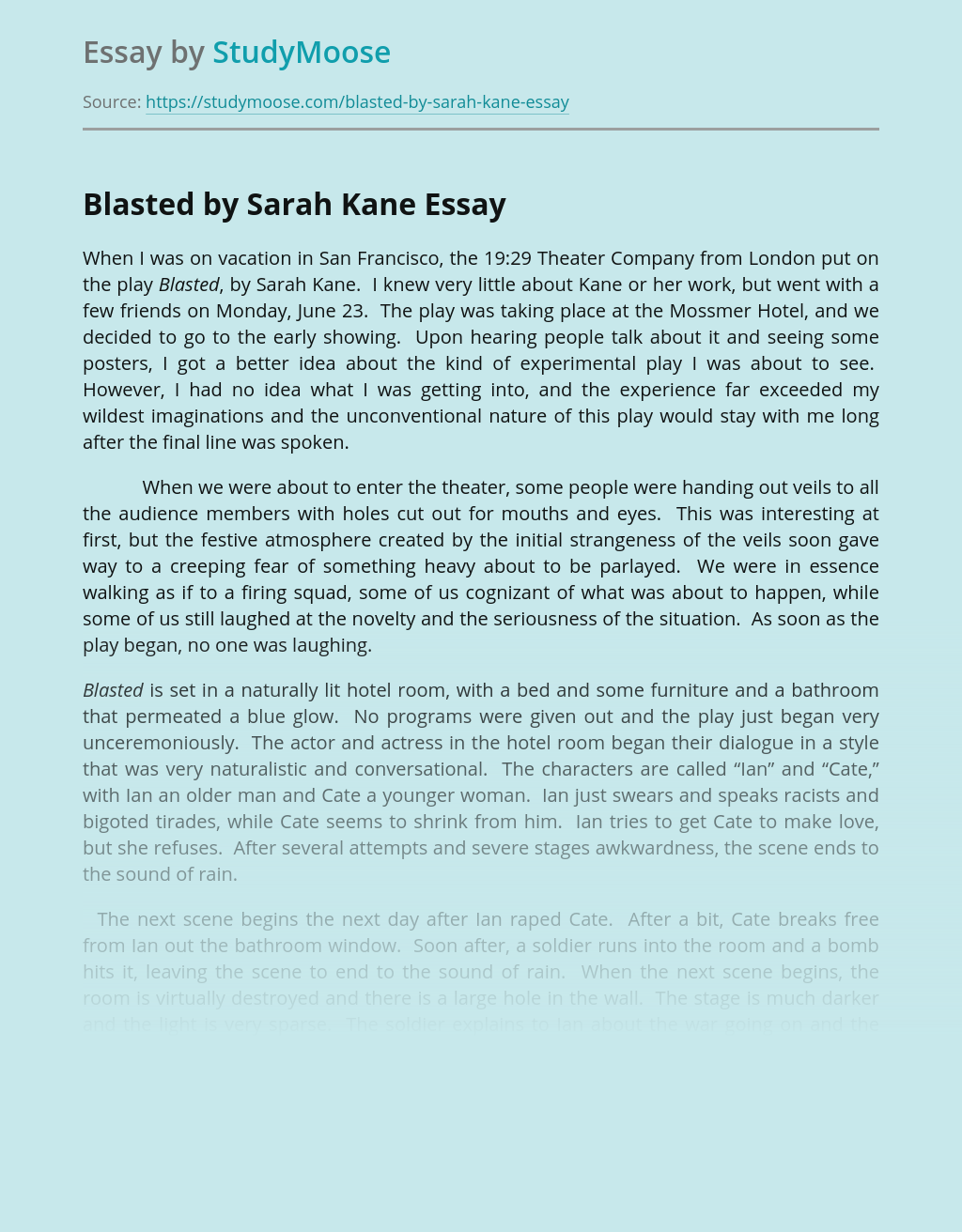 According to writer, Albert Camus, “Great works are often born on a street corner or in a restaurants revolving door. ” A good restaurant should contain a luminous environment, delicious food, and have a friendly staff. Benihanas excels in all of these categories, which is what makes it such a great restaurant. Now let me...

Article III Bill of rights – declaration and enumeration of a person’s right and privileges which the Constitution is designed to protect against violations Basis: social importance accorded to the individual in a democratic or republican state Classes of rights 1) Natural rights – right possessed by every citizen without being granted by the State...

Alida Slade has imagined for years that her scheme had been successful in removing Grace Ansley  from the scene and thus allowed her to get Delphin for herself, but discovers that her plan had backfired terribly. It turns out that her prank had such long lasting “effects” (in the person of Barbara).  For some time...

Salvadore Felipe Jacinto Dali Y Domenech was born on May 11, 1904 . in Figueras, Spain. He was a Spanish Surrealist painter and printmaker by trade. Dali is commonly regarded as having been “artistically influential for his explorations of subconscious imagery”. As an art student in Madrid and in Barcelona, Dali assimilated a vast number...

Compare and Contrast Plato and Decsartes