Impact and Legacy of French Revolution

The French Revolution is the greatest event of the modern period. It influenced the whole human society. The whole world received the message of liberty, equality, and fraternity. The welfare of the common man became the paramount priority and required changes were made in their constitution by the different countries. A brief description of the effects of the French Revolution is as per the followings.

I. Effect on France

There is no doubt that the French Revolution had far reaching implication for the world.

Turn in your highest-quality paper
Get a qualified writer to help you with
“ Impact and Legacy of French Revolution ”
Get high-quality paper
NEW! AI matching with writers

However, it had influenced France the most. The Revolution had left following social, economic and political effects on France. France – The Representative of Humanity: – France became the representative of the humanity. It gave to the world of humanity three main important messages of Liberty, Fraternity, and Equality. However, it paved the way for Republican governments for rest of the humanity when it became successful in France.

The Empire of France became French Nation: – The French nation was born because of the French Revolution.

Since then, there was one France in place of different regions. The thirty million French (three crores) now had the equality of status as a citizens of a nation and equality before law for all of them. They were patriots of their nation in place of loyalty to any dynasty. End of Despotic Rule: – Before the French Revolution, the Bourbon family was ruling over France. The rulers of this dynasty believed in the theory of divine right of kingship. They ruled as per their own wishes and whims.

The French Revolution destroyed their very existence. It established a constitutional form of government and republic in France.

They made the French people their own ruler. Written Constitution: – France got her first written constitution due to the French Revolution. It was also the first written constitution of the European continent. It gave the right of franchise to the citizen of France. There were some shortcomings in the constitution but it had ushered in a new era in France. Declaration of Human Rights: – The main result of the French Revolution was that the French people acquired many human rights. They were given the right of equality, freedom of expression, etc. They were free to organize their associations. They got the right to property. They got the equality before the law. They could object to illegal actions of the government officials.

Abolition of Feudalism: – The Feudal system ended due to the French Revolution. With the French Revolution, the difference between the privileged and non-privileged class ended. It was an end of the old despotic system. Decrease in the influence of the Church: – The influence of the high priests on the society of France ended. The priests took oath on the new constitution to maintain their loyalty to the French nation. The state became the owner of the wealth of the church. The priest started receiving salary from the state. On the other hand, the French people started adopting rational attitude in place of the blind faith based on religious affiliations. Administrative Changes: – Numerous changes were made in the administrative structure of France due to the French Revolution. A single code of law was implemented in whole of the France and it was also codified. The whole of the country was divided into 83 departments for the administrative purpose.

The principle of election was adopted in the administrative at the required places in the administration. Re-Organisation of the Judicial System: The National Convention introduced a common judicial system for whole of France. The penal code was made soft and same types of punishments were introduced for the similar type of crimes committed by any person without any discrimination. The judicial system was made independent of the executive and legislator. The ‘Jury System’ was introduced to try the criminal cases. Public Works: – Many public welfare works were undertaken due to French Revolution. New roads and canals were constructed. New dams and bridges were build. The land was reclaimed from marshes for farming.

The economic infrastructure was improved to promote the trade. The large landholdings of the lords were sold to farmers at cheaper rates. The agriculture was modernized. Such improvements brought amazing changes in the economic strength of France. Changes in the Conditions of Farmers: – The condition of farmers improved due to the French Revolution. The revolution ended the feudal system, which liberated the farmers from the burden of unnecessary taxes. They did not have to pay the taxes to the landlords and tithes (the religious tax) to the church. Cultural Effects: – France made numerous achievements in the field of art, science, and literature due to French Revolution. Numerous schools, colleges, universities, and academies were opened in the country. The special attention was paid to art, literature, science, mathematics, technology, and physical training in the field of education.

The immediate effects of the Revolution on England were as per the followings. Effect on Reform Movements: – Pit, the Younger, the Prime Minister of England in 1789, praised and welcomed the events of French Revolution, when it started in May 1789. When the Britishers watched the blood shed which followed the revolution, they turned against it. However, the main message of liberty, fraternity and equality arrested the attention of the British. They started various movements for social and political reforms. Effect on British Politics: The social reform movements which started as a result of French Revolution divided the Whig party. The division due to ideas of French Revolution weakened the Whig party of Britain.

Economic Crises: It led to Financial crises in Britain. Britain started supporting the anti-revolution parties. It also extended them the monetary help. Britain also suffered due to the economic blocked launched by Napoleon. It increased her financial liabilities and her citizens were made to suffer the load of extra taxes. Influence on Ireland: The success of French Revolution encouraged the revolutionaries of Ireland. They increased their revolutionary activities. British government was forced to adopt oppressive measures in Ireland. Effect on Literature: The issue of French Revolution became the subject matter of the English poets, essayists and political commentators.

2). A phase of new Wars: The rising tide of revolution in different countries became the cause of fear among the autocrat rulers. They joined to check the spread of the revolution. It pushed Europe in a spate of anti-revolutionary wars.

3). Rise of Concert of Europe: After defeating Napoleon, the European nations organised the Concert of Europe in 1815. It aimed at maintaining the status quo and reinstatement of European royal families. It was also accompanied by the reactionary policies against the revolutionary movements in European countries.

Impact and Legacy of French Revolution. (2016, Nov 03). Retrieved from http://studymoose.com/impact-and-legacy-of-french-revolution-essay 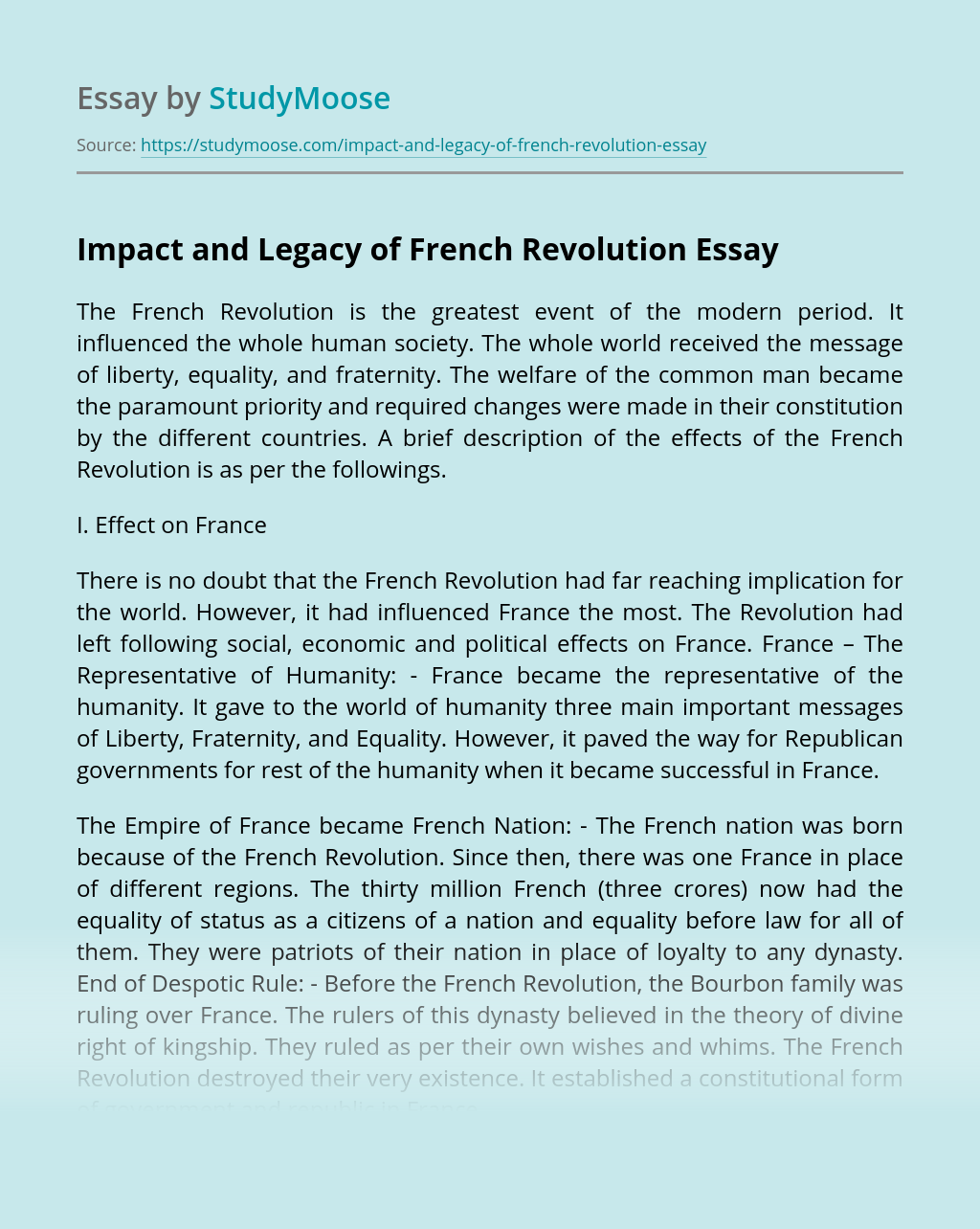 Turn in your highest-quality paper
Get a qualified writer to help you with
“ Impact and Legacy of French Revolution ”
Get high-quality paper
Helping students since 2015
Stay Safe, Stay Original