The Constitution is important to America because it was the document that had founded our government. It was the basis of what would form the United States. It outlines all of our rights as citizens and gives a complete list of all the things we can do, and the rights that we have. The Constitution is the most important document ever crafted in American History, it had developed the representation of the Great Compromise, it had addressed the weaknesses in the Articles of Confederation, and it addressed the complaints in the Declaration of Independence

The Great Compromise was an agreement amongst the nations with the Connetticut delegates Roger Sherman and Oliver Elsworth.

Don't use plagiarized sources. Get your custom essay on
“ Constitution Paper ”
Get custom paper
NEW! smart matching with writer

while the membership of Senates would be equal.

The Articles of Confederation were the original document in the United States that had served as the Supreme law and sought to combine the disparate colonies under a single governmental entity until the Constitution had replaced The Articles of Confederation completely. Established during the revolutionary war, The strong central government were afraid that their individual needs would be ignored by the national government.

The Articles developed a constitution on purpose because it would provide poser to the individual states. Instead of having an executive and judicial branches of government, The articles had their “Independence”

The Congress was granted power only over foreign policy, war, and setting standards. The Congress had absolutely no power over trade, could not directly tax the people, could not enforce the laws, and could not compel states to cooperate with one another. The Constitution corrected the weaknesses of the Article of Confederation because the Constitution had allowed for the making of an army, allowed the coinage of money, permitted the federal government to enter the treaties and trade agreements as one nation rather than separate nations.

With the weakness following behind the Articles of Confederation, The Constitution addressed the failures of the Articles of Confederation by the Constitution hammering out the fundamental rights of the states and outlined the role and responsibility of the federal government. They had established The amendments. The major weaknesses that occurred were no power to tax, no national executive, unicameral legislature, and no judicial or national court and much more. With this, the articles were the solution of the problem. For example: Article I sec 8, Article II, Article ! and much more.

The Constitution was ratified in 1789 as an improvement over the Articles of Confederation and was created to form a more unified government. The Constitution states the basic principles of our society and the basic laws of our nation, it also states how our nation is organized including the powers and authorities of our government between the different political units. It guarantees certain rights to the people and limits the powers of our governments different branches.

The Constitution was very important to America because it is what established the basis of the United States. The Constitution gave the people structure and rules so it may be a well organized country. 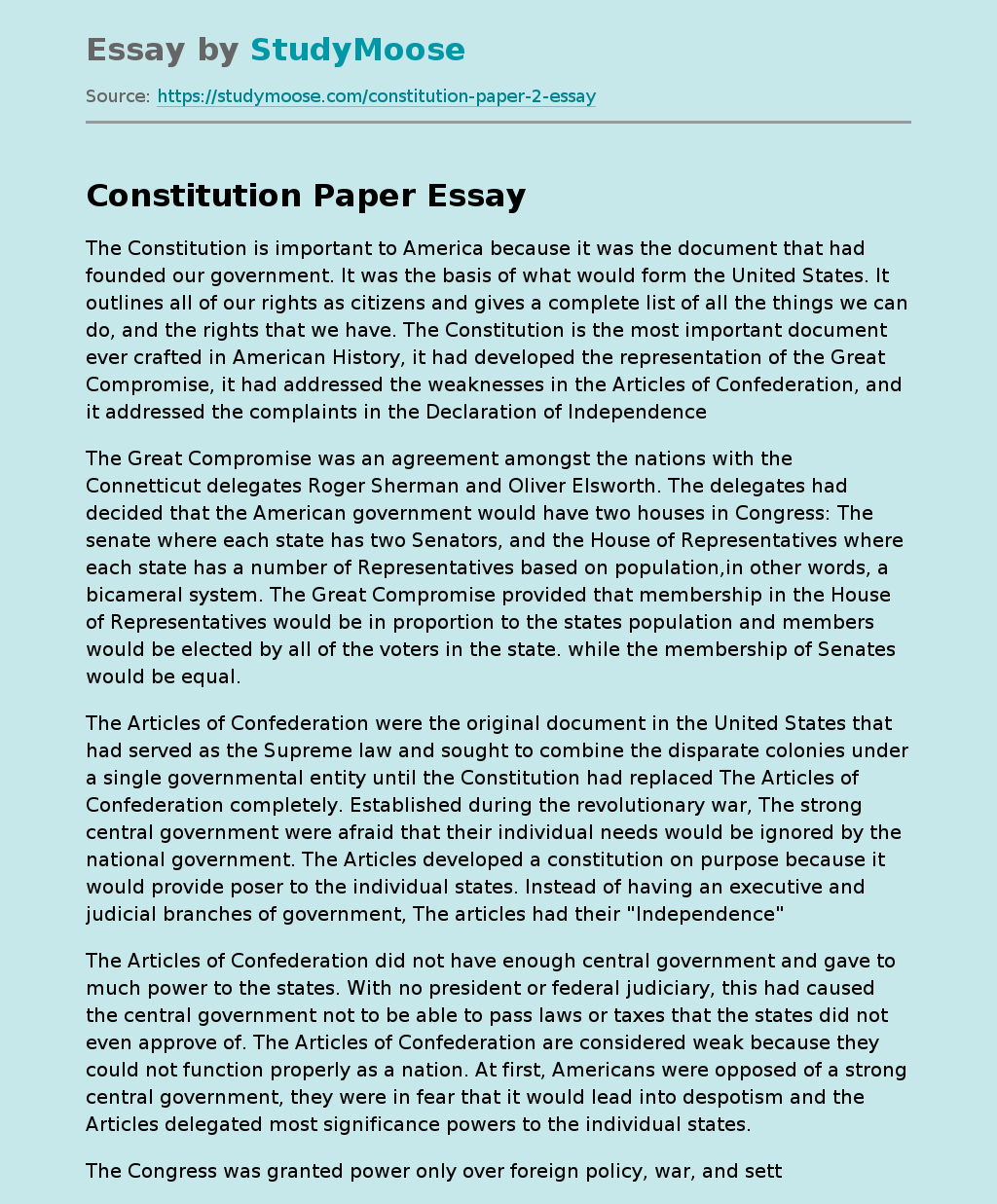