Why is our constitution called "a bundle of compromises?"

On May 25, 1787, fifty-five delegates from twelve states met in Philadelphia to revise the Articles of Confederation. Instead, they decided to totally scrap the Articles and create a new Constitution, known as “a bundle of compromises.” Whatever these leaders’ personal desires, they had to compromise and adopt what was acceptable to the entirety of America, and what presumably would be suitable to the nation as a whole. There were many compromises made at the Constitutional Convention, such as representation, slavery, and laws concerning foreign/ interstate imports and exports.

Turn in your highest-quality paper
Get a qualified writer to help you with
“ Why is our constitution called “a bundle of compromises?” ”
Get high-quality paper
NEW! AI matching with writer

The compromise of most importance was named the “Great Compromise.” Delegates were quite interested in how their state will be represented in this recently independent country. Edmund Randolph, speaking for the state of Virginia, proposed the “large-state plan.” This plan anticipated that representation for each state should be based on population. William Paterson, of New Jersey, disagreed with Randolph’s plan, fearing that the stronger states would band together and ignore the smaller, less-populous states.

Virginia finally agreed with this negotiation when the Confederation promised that all tax bills and revenue measurements would start in the House of Representatives, where population counted more heavily. The second compromise was a strong, independent executive branch, with a president who would be military commander-in-chief and could veto the legislation.

This president would be elected through the Electoral College, rather than by the people directly. Anti-federalists believed that the executive branch did not effectively represent the people, and that only the legislative branch did so. However, the anti-federalists were mostly the poor farmers, the illiterate, and the states’ rights devotees; who were not given much representation by any means.

The Constitutional Confederation finally agreed that slaves will count as three-fifths of a person in census counts as well as representation in the House of Representatives. Slave trade was allowed to continue until the end of 1807, when the congress shall meet again to discuss the issue at that time. Many other laws were made concerning the importation and exportation of foreign goods and staple crops: “Congress may regulate commerce with foreign nations, among the several states, and with Indian tribes”; “No tax or duty shall be laid on articles exported from any state”;

“Congress may not give any preference to any regulation of commerce or revenue to the ports of one state over those of another; nor shall vessels bound to, or from, one state, be obliged to enter, clear, or pay duties in another”; and “No state shall, without the consent of Congress, lay any imports or duties on imports or exports, except what may be absolutely necessary for executing its inspection laws: and the net produce of all duties and imposts, laid by any state on imports or exports, shall be for the use of the treasury of the U.S., and all such laws shall be subject to the revision and control of the Congress.”

In short, all delegates at the Convention believed in a system with checks and balances, and the conservatives deliberately erected safeguards against excesses of mobs. However, the people still had power, and the government was still based on the people. This Constitution still serves as the basis of our government in America today, and probably will remain in that state in the forthcoming generations.

Why is our constitution called "a bundle of compromises?". (2016, Jun 26). Retrieved from https://studymoose.com/why-is-our-constitution-called-a-bundle-of-compromises-essay 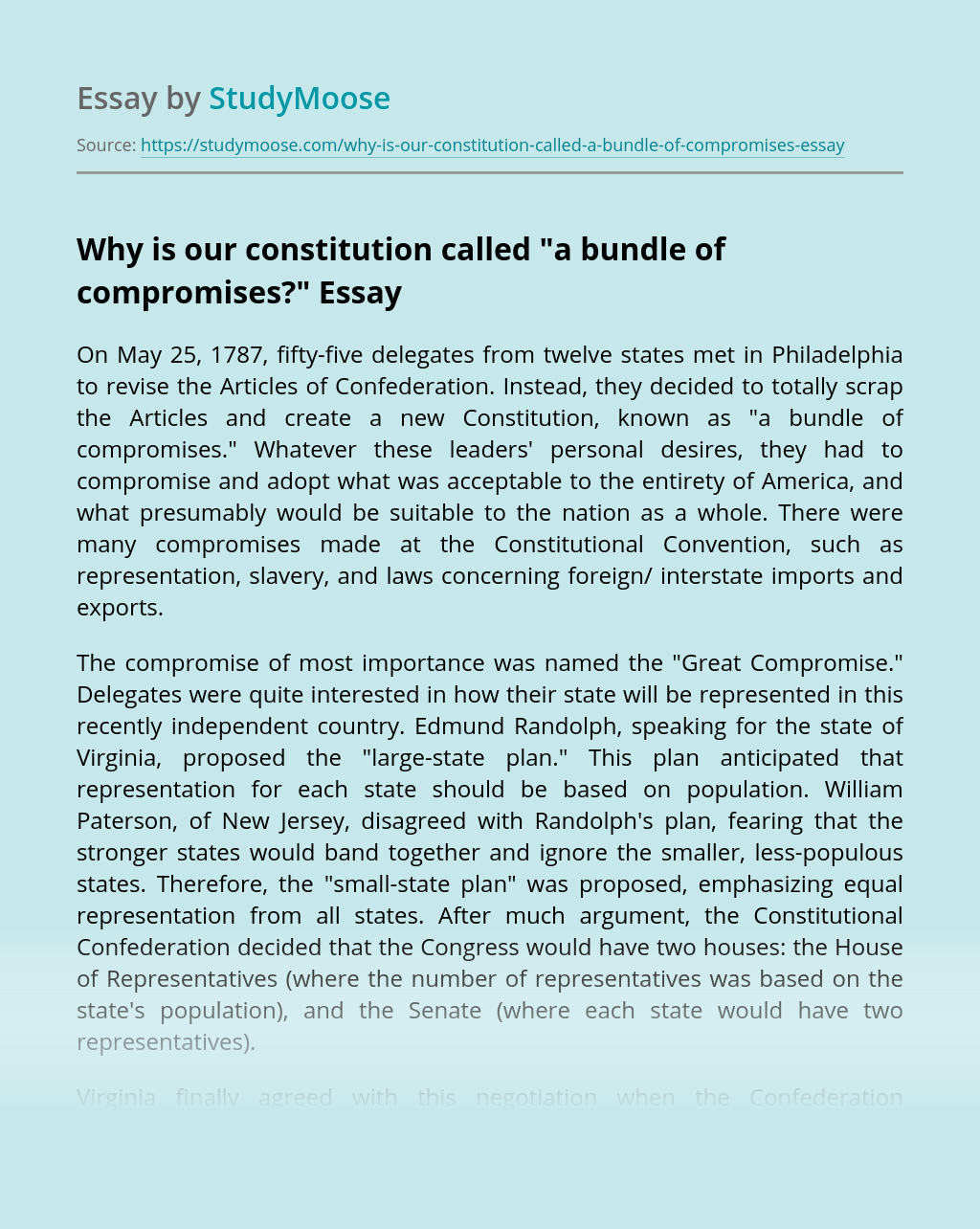 Turn in your highest-quality paper
Get a qualified writer to help you with
“ Why is our constitution called “a bundle of compromises?” ”
Get high-quality paper
Helping students since 2015
Stay Safe, Stay Original