Education is a process of learning. It is a kind of method to get knowledge in human life. As John Dewey said education ‘brings out all capabilities’ of human beings.

It helps us to live our life independently. Accordingly, Socrates said that education has taken out our ideas from ‘innate capabilities’ so that we can know everything of the world. Education has certain functions as we observe its nature. The nature of education can be divided into four groups. They are: formal, non-formal and informal; general and specific; direct and indirect; and individual and collective.

Don't use plagiarized sources.
Get Your Custom Essay on Sociological Foundation of Education Just from $13,9/Page

These educations have different functions that help an individual and nation to progress in respects. The functions of education, as Dewey said, is to change an indifferent creature into a happy man with incite what he has got. So, different functions of education are: Individual, Social, Economic, National and International. Education is thus helpful to all of us from individual to international level. The goal and purpose of education is to change behavior of human beings. Human beings want to experience new things and they are searching ideas to attain that. It is possible only through education.

So, broadly speaking we can divide the goals of education into two categories: Individual and Social. Education has changed us individually because it makes us aware about personal rights and independence. Similarly it aims to change society as well. It helps us to change the social rules, functions and customs. It makes us aware about the values of society and so on. Thus, the aim of education is to contribute for development of any society. Sociological Foundation of Education Sociological concept is not odd in the history of human beings. People live in community and they perform mutual behavior or coordination to lead their life.

Thus, “sociology is a social science which concerns with the scientific study of human relations or group life” (Regmi, Bhandari & Gurung, 2011). The concept society comes through the process of socialization. People live in coordination by forming a community and they have practiced living in groups or forming society. They formed rules and regulations and practiced it while living in society. Hence the society has got its shape. Rules and regulations have been guiding the society by forming its norms. They have formed it and practiced it in the daily life and it takes the form of ritual.

So “sociology comprehensively studies social behavior, social interaction, social structure and culture of society. ” (Regmi, Bhandari & Gurung, 2011) The tradition has thus been established and humans have developed the concept of society. The scholars have practiced it and they have been trying to analyze the context of the society as they have understood it as per the demand of time. The context of society and education has thus related to study the foundation of it. Education is the main part of human life and they learn knowledge through it. Though they have got knowledge through different practices, education has made it systematic.

Education has got its shape in the context of learning and doing practices. Therefore, Regmi, Bhandari and Gurung (2011) say that “education has been developed as one of the ways to fulfill the need to train the members of society. ” The study of education thus contributed to transform their knowledge and tradition to their future generations and they have been keeping their rituals as that was. The knowledge of one society is different from the knowledge of another society. So Regmi, Bhandari and Gurung, (2011) started that “the society gives training to its members from society to society. ”

Function of Education in Society Education has various purposes and it is used differently as we observe the history of human beings and education itself. One of the purposes of education is to aware society. So it has got its base in society. So, different scholars analyze it in different perspectives. Emile Durkheim analyzed it from functional perspective. It means education has been used to continue the social structure or hierarchies in the society. Or it is the language of the ruler to teach his subjects. Moreover, education has also been taken as to liberate society. It makes people aware about society and is rights.

So the people feel liberated by getting education. J. J. Rousseau was the founder of such liberal movement of education. On the other hand, feminists took it as the vehicle to continue male domination in society. They think that education is lopsided and it only supports the norms of patriarchy and suppressed women. Simon de Beauvoir is a famous feminist who have popularized the movement with the publication of her book ‘The Second Sex. ’ Similarly, social democratic perspective takes education as the factor of implementing democratic rule in the society. They are nearby the liberalists.

They think that education can implant knowledge of democracy in any society so people can feel liberated. Likewise, some scholars take the purpose of education from conflict perspective. Karl Marx was the founder of such movement. They take education as a seed of conflict because it makes people aware about their rights. Finally, Interactionist, George H. Mead, focused education as a phenomenon of doing interaction among people. It teaches different cultures of different people and they are being interacted with the help of education. It helps in the society to establish rules, cultures, tradition etc. ith the help of interaction among people.

The education also creates the inequalities in the society. Analysing through conflict theory it would be a means to keep continue the power in owns controll. Schooling is one such means used to legitimize the inequality, causing conflicts between groups of people (Parajuli & Gautam, 2013) Social Context and Environment of Education Education is only possible in human society. It creates a kind of environment along with the environment it has grown up. In this modern age, education has focused on ethnicity and multiculturalism as well.

It takes the marginal issues like ethnicity, indignity, etc. The motto of education is to make people aware about different cultures and context of the world. As a result many scholars have been trying to study about multiculturalism at present. There is also close connection between economy and education. In the past education was taken to prove them as scholar; but now it has close connection with economy. It is highly commercialized. A person who has read well, earn well is the philosophy of modern education. Education has brought social hierarchies along with system of schooling.

Not only the movements from one place to another, the attainment of education also change people’s position in society from lower to higher and vice-versa. For example, if a Dalit person has got good education, he is uplifted with high income and prestige like Swamy Prapannacharya. Education has the purpose of teaching ethics and moral values. Now, the world is being worse day by day. People have got education but they haven’t got the idea of morality. So education should help to promote ethics and moral values. Moreover, at present, education should help for sustainable development.

It should make people aware about the condition of the environment of the world. Without environment we can’t live happily. So we should utilize the resources without harming the rights of future generation. So education should aware us about sustainable development or it should teach us how to conserve environment where we live. Constructivism and Post-modernism The latest purpose of education is constructivism. Old system of education faded all human beings. They have been trying to find the way out with boring methods of delivering education like in ancient time.

The scholars like Jean Piaget, Jerome Burner, Lev Vygotsky Albert Bandura focused on the constructive education. They tried to explore the best way to deliver education with more effectiveness. So, they emphasized that education must be constructive. It should teach human to be creative. We must be innovative. We can do everything with creativity. Students should generate knowledge themselves. They should have tried to do everything themselves rather than listening lecture in classroom. Hence the scholars suggested teacher to work as a facilitator and students should effort themselves so that they can find new things with practical knowledge.

If we look at the history of Nepali education certain group (cast) of people were only regarded to pursue the education. According to Neupane (2008) till the time period of Baise and Chaubise “only Brahmins and Chhetries were forward in education. ” Similarly, another contemporary thought of education is post-modernism. It is quite popular at present. Jack Derrida, Michael Foucault, Jean-Francois Lyotard, etc were the founders of such movement. According to them, people find multiple realities in their life. They try to seek various meanings in curriculum or education system.

There is no structured rule in any society. The truth and reality are changing matters. All sorts of ideas are acceptable in society. People believe in nihilism or there is no single reality in the world. They find out challenge to an individual and he or she should fight against everything themselves. No people can help others because all are selfish and there is no humanism at all. So the world is going back to the wild and people are like animal. Education has been teaching people to be free and they shouldn’t follow the so-called old order because that is not only the solution of problems. 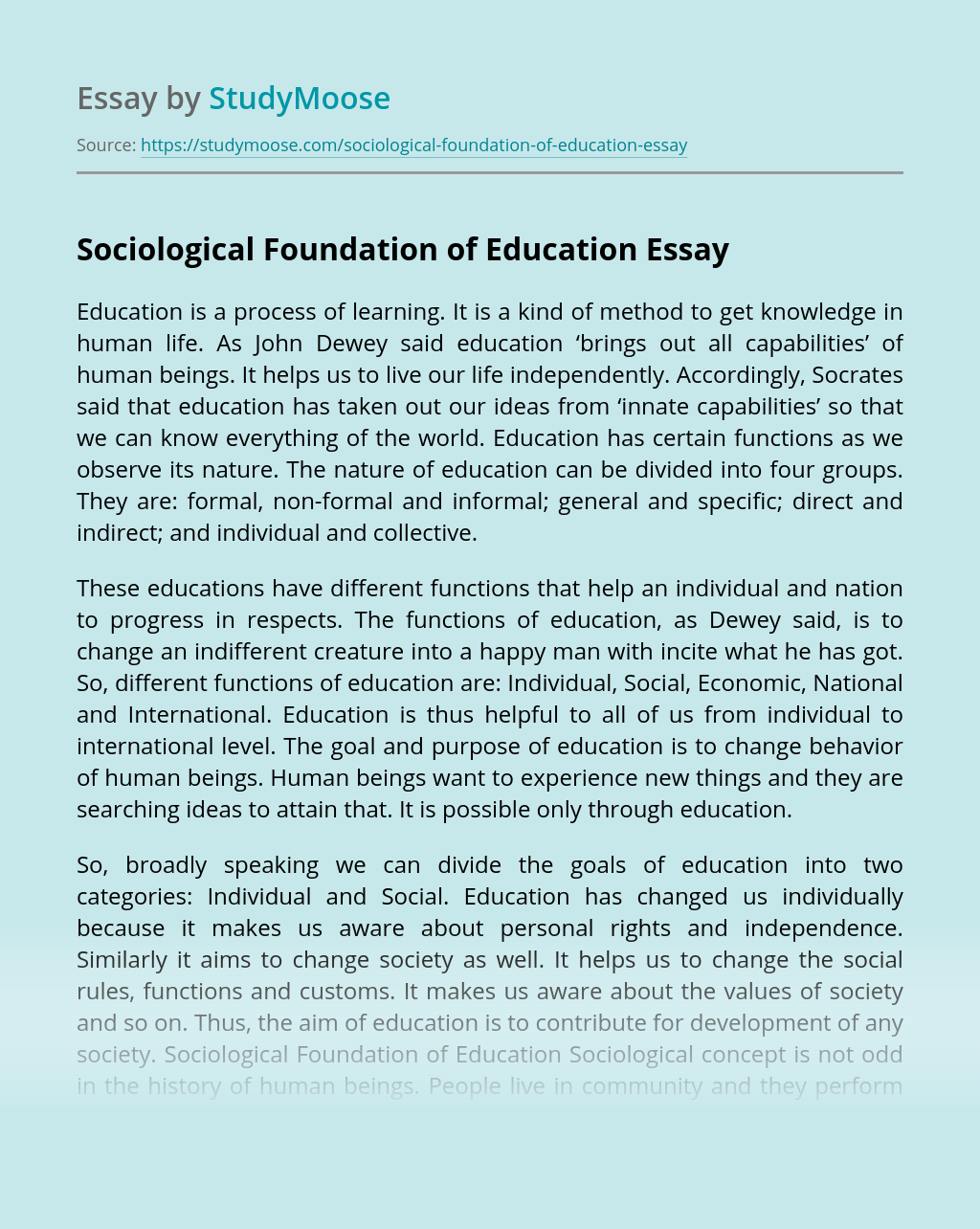 This chapter views the relationship of the current project study in connection to the previous related researchers and literatures. Understanding the associated studies both foreign and local, and the concept of other components related to the current project study will clearly show where the proponents got their concepts and ideas. It clearly establishes the empirical...

Get Essay
Speech on Education

Central to our struggle for all these years and central to why we are contesting this election is the struggle to create whole beings. Each time we remind ourselves why we’ve had a prolonged struggle in our land, we come back to the same answer; that every child, every woman and man in our country,...

Education is a process of learning. It is a kind of method to get knowledge in human life. As John Dewey said education ‘brings out all capabilities’ of human beings. It helps us to live our life independently. Accordingly, Socrates said that education has taken out our ideas from ‘innate capabilities’ so that we can...