The Culture of Egypt is one of the most ancient cultures and has five thousand years of history. It can be said that it is one of the richest cultures of the world as ancient Egypt was among the earliest civilizations. Egyptian culture is known to have a significant influence on other cultures such as Europe, the Middle East and Africa. However, soon after the Pharaonic era, Egypt came under the influence of Hellenism, then Christianity, and later, Arab and Islamic culture.

Modern Egypt continues to have the ancient Egypt’s culture including the influence of modern Western culture, itself with roots in Ancient Egypt (Wikipedia n. ag, 2007). Ancient Egyptian In the ancient Egyptian culture religion played a very important role. In fact without the ancient Egyptian Religion, there would perhaps not much reason for today’s increasing tourism. The great Pyramids of Egypt’s are a major attraction. These huge structures would not exist, nor the fabulous temples, the tombs on the West Bank of Thebes and their mummies, or the colorful decorations on these structures that have attracted travelers to Egypt over the past three thousand years or more.

Behind every aspect of Egyptian life, as well as the art, and the cultural accomplishments it is important to understand the religious forces that formed the cultural aspects of ancient Egypt. Religion The spiritual or the religious world that was formed by the ancient Egyptians was a richly fascinating one which remains unique in the history of human religion. Although Egyptian religion was often covered in layers of myth and ritual, it on the other hand permeated the ancient civilization of the Nile and eventually shaped, sustained and directed Egyptian culture in almost every way.

In fact if we look at the ancient history, people were more worried of the afterlife than the day to day life. Egyptians believed that they could enjoy life after death that made them to prepare for their death and burial. For instance, they construct pyramids and tombs for kings and queens. Other Egyptians had similar tombs. Additionally, it was very important in order to have a good afterlife for one to not only worship the Egyptian gods, but also live by a rules and regulations that would be judged after death.

Ancient Egyptians also believed that the bodies of the dead had to be preserved for the next life and so they mummified the bodies. Even though there was a substantial amount of stability between various areas of Egypt and over the religion’s long existence, there were several changes over the past years and changes in the theology. For instance, while some 1,500 gods and goddesses are known by name from ancient Egypt, many of them were not worshipped at any one time or in any one place. As a result it is possible for one to observe variations over the years and cultural differences.

Eventually, several changes took place in the religious aspects. For example, the burial practices of the Egyptians, which were definitely affected by their religious ideologies, went from simple mastabas in the very early periods and during the Predynastic Period, to monumental pyramids during the Old and Middle Kingdoms. This tradition of pyramids and tombs reduced preferring instead to have hidden tombs with no superstructures at all. Perhaps part of the reason for this was the security of the tomb and its content of valuables, though it did not do much to stop the tomb robbers.

Another reason behind this was the Egyptian religion’s movement towards Osiris. The god Osiris also seems accountable for another major change in Egyptian religion through its long history along with the popularity it gained. Osiris was a democratic god who without a doubt became more and more popular because the theology surrounding him allowed even common Egyptians the chance of immortality after their death. Believes and Values There are certain beliefs and rituals that still remained.

For instance, there seems to have always been a sun god from the earliest of times, however his worship too changed over time, and sometimes significantly. The sun god Re was worshipped at Egypt’s earliest shrines and his worship most likely reached a high point during the late Old Kingdom, when kings not only built their pyramids, but also specialized temples to worship the sun god. Additionally, the rituals main part was the offerings, but there were certainly numerous other rituals, together with many daily functions such as washing and clothing the gods.

There are a few rituals that were major celebrations, for example, the statue of one god might be taken to visit the cult center of another. The advantage with this system was that it was mostly during these festivals that common Egyptians probably came closest to their gods, since at other times they were forbidden from the sanctuaries that housed the cult statues. A value system in the Egyptian culture formed a great part as it is even almost the same way that it is today. It can be said that most of the value systems present today in the modern day is adopted form the ancient Egyptian culture.

Undoubtedly, the value system had both a secular and religious side. In terms of religious believe, as in many religions today, each person was judged upon death for his or her actions during life, and either condemned to be a member of the damned or the blessed (Watson n. pag). Another aspect of the culture comes with the style of traditions. For instance, the ancient Egyptians were the first civilization to regard marriage as a legal relationship. Marriage in ancient Egypt was a religious obligation.

The ancient Egyptian laws prepared the marriage relationship and indicated all rights and duties for the couples. Many of the old marriage contracts have been found, and they were registered and signed by three officers. These ancient Egyptian laws gave the right of divorce to women as well as men, and the wife had great respect and a high degree of prestige (El-Bialy n. pag, 2003). Even today these cultures have been adopted by many other cultures. Egyptology In the recent years, the Egyptian culture has had a great impact on the archaeology and the study of Egypt’s ancient heritage.

The field of Egyptology has itself become a major scientific subject of great interest in Egypt and also around the world. It began in Arab Egypt during the Middle Ages, but was later led by Europeans and Westerners in modern times. However in the recent decades the study of Egyptology, has been taken up by Egyptian archaeologists such as Zahi Hawass and the Supreme Council of Antiquities he leads. With the discovery of the Rosetta Stone (a tablet written in ancient Greek) Egyptian Demotic script, and Egyptian hieroglyphs, has in part been credited for the recent stir in the study of Ancient Egypt.

Greek which is a well known language, gave linguists the capability to decode the mysterious Egyptian hieroglyphic language. The ability to decode hieroglyphics facilitated the translation of hundreds of the texts and inscriptions that were earlier impossible to read, giving insight into Egyptian culture that would have otherwise been lost to the ages. This stone was discovered on July 15, 1799 in the port town of Rosetta, Egypt, and has been held in the British Museum since 1802 (Wikipedia n. pag, 2007). Economics

Today, the major economic activities of Egypt depend on agriculture, mining, manufacturing, transportation and communication and others. Tourism is a major source of revenue today. Ancient Egyptian farmers relied on the annual floods of the Nile River to irrigate their fields and renew their top soil. Conclusion Finally, it can be said that the rich Egyptian culture has an impact on the various modern day cultures. It was the birth place of one of the world’s first civilizations which arose about 5000 years ago.

Egyptians developed one of the first religions to emphasize life after death. Besides, they also build many cities where many skilled architects, doctors, engineers, painters, and sculptors worked. Islam is the official religion of Egypt as about 90 % of them are Muslims. Tourists from all parts of the world travel to Egypt to see such wonders as Great Sphinx, an enormous pyramids etc. For people throughout Egypt, the beliefs and traditions of Islam form a unifying bond. In fact it is one of the richest cultures in the world. 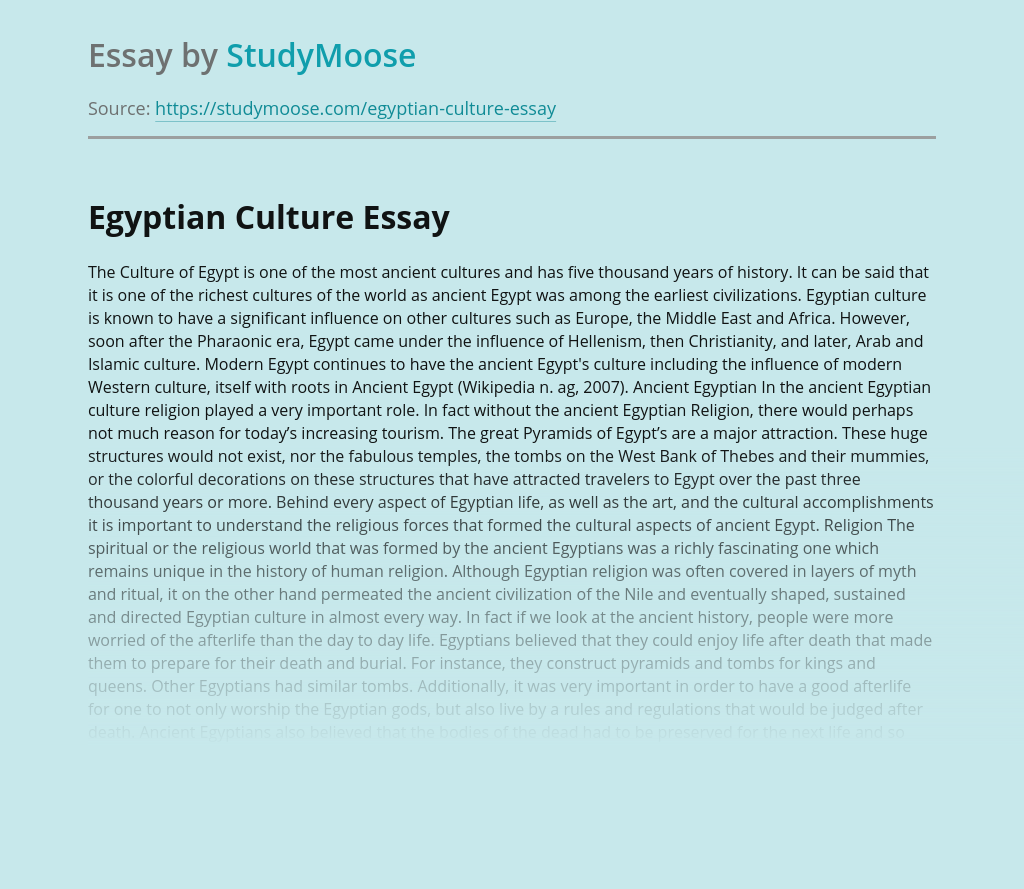