When searching for information on feudalism it is difficult to find modern sources speaking of it in a positive connotation. Most seem to regard it as merely a necessary step to capitalism. However, there are many aspects of feudalism still present in our society. Our society’s modes of defense and organization, as well as the devices used to make our standard of living possible, can be traced back to the age of feudalism.

The feudal system stemmed from the people’s need to defend themselves from their many enemies.

The main reason that people were willing to become vassals and work for their lord was so that they could be protected by him (Tierney 162). In the same sense, people in modern society expect their government to provide protection from any enemies that arise. In the feudal system, this protection was in the form of armies provided by the vassals to the lord. These armies where made up of knights who where expected to fight when called upon by their lords to do so (Tierney 162 ).

In modern society the armies are also made up of people in the community who are called upon during times of war through, a system of drafts. In the Middle Ages, when a neighboring fief controlled by the same lord was attacked, the neighbor was expected to help defend it (Feudal Life). If one of the United States is attacked by a hostel force, soldiers are drafted from all of the adjoining states, not just the one under attack.

The organization of the country into different states that are in turn divided into counties and cities is also reminiscent of the feudal system. Each successively smaller division is run by it’s own elected official and each official answers to the one higher up the ladder. This is very similar to the feudal system where the lord had vassals who in turn had vassals of his own and serfs. All of the vassals where involved in decision making of the land. Counsels had to be consulted before any major decisions were made (Tierney 162-163). Another thing that emerged in the Middle Ages that we still see today is the middle-class society.

During the feudal era there were plenty of people who could farm so some of them started to do other things such as carpentry and blacksmithing. There were enough specialists around that the farmers didn’t have to do everything themselves anymore. For example, many manors in the Middle Ages had mills on the property. These Mills provided everyone with the flour needed to make bread (History). Today, few people in the general population would be able to do everything required for their survival. Everyone has one or two things that they are good at and that they make their living from and everyone buys what they need from other such people.

In order to make all of the food and other goods required to keep modern society functioning normally, many devices are used that originate from the time of the feudal system. Around this time, slaves were replaced by serfs and free workers so ways of making the work easier surfaced. One of these was the practice of using work animals to help with farm labor (History). Granted this is not practiced as much now as it was then because we now have things like tractors and cars to make labor easier, but there are still some animals used for labor.

Another device developed during this time that made work easier for the workers was the wheelbarrow. This is still widely used today for all sorts of things, along with the gear or toothed wheel which is the basis for most machinery and clock mechanisms. Another practice started in the middle ages that is extremely useful to us is the use of wind and water for energy (History). We generally use the power of these elements to provide us with electricity where they used them for mills and similar applications, but the basic idea is still the same.

So it is apparent that our society is indebted to the age of feudalism for many things that we take for granted. We still use aspects of feudalism for producing food, defense, and structuring our government. Perhaps those socialists that can only speak of feudalism as a necessary step to capitalism with an arrogant detachment to its true importance should be reminded of what it was like trying to survive during one of the most dangerous periods of civilization. 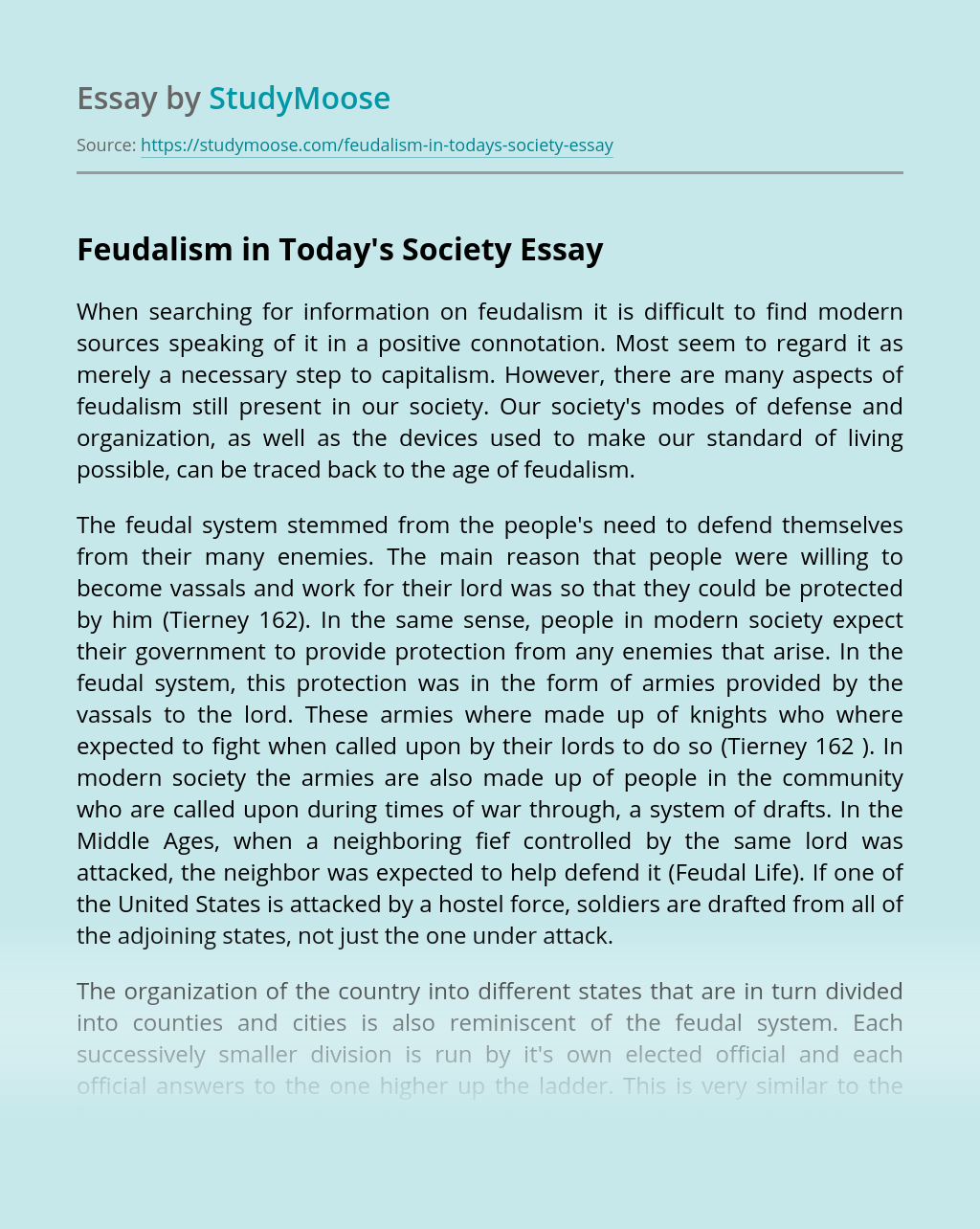 Don’t waste time
Get a verified expert to help you with Feudalism in Today’s Society
Hire verified expert
$35.80 for a 2-page paper
Stay Safe, Stay Original