Both the Feudal and the Caste System stressed rankings in society and they each had a hierarchy. This however, was one of the many similarities and differences the two systems had. In the Caste system, people in each varna (social class) were born into his/her class and married within their own group. One could not move up the social ladder and one could only be one varna. In Feudalism, one could be a lord and a vassal at the same time one person could pledge allegiance to more than one lord at a time.

Don't use plagiarized sources. Get your custom essay on
“ Social Class in Feudal and Caste System ”
Get custom paper
NEW! smart matching with writer

Also, in the Caste system of India, the most important varna were the priests while in Feudalism, the king was at the top of the hierarchy. In feudalism, the lords and the knights made up the nobility which was similar in India’s system, where the priests and warriors made up the nobility. In both, the class right below the emperor or king and the military are the most powerful and noble.

In the caste system , women had hardly any rights and could not be priests or warriors, therefore they could never be in the upper class. In the feudal system, although ladies had few rights, women could be in the nobility. The noblewomen mainly sewed and raised the children. Likewise, the women in India were confined to household tasks as well. In both systems, there was no central government, in feudalism, each lord had his own rules on his manor and in India, the Kshatriyas, led the government, which was a council of elders for each village.

There was no such thing as one government, instead there were several that were independent from each other. But unlike the feudal hierarchy where the king is on the top, in the caste system, the class after the first class is the one that heads the government.

Also, in the feudal and the caste system, most people were the slaves. In the caste system, more than half the population consisted of the Pariahs(slaves) and in the feudal system, most people were serfs that were bound to the land. The serfs, the lords, the vassals and everybody had a certain duty to fulfill. The king granted the lords land, the lords in exchange had to raise armies of knights, the knights had to fight no matter what and the serfs worked for the lord their whole lives and were granted food and shelter in return. In the caste system, every person had their own dharma to fulfill, depending on their rank socially. The social systems of medieval Europe and India have many similarities and differences, even though they are across the globe from each other. 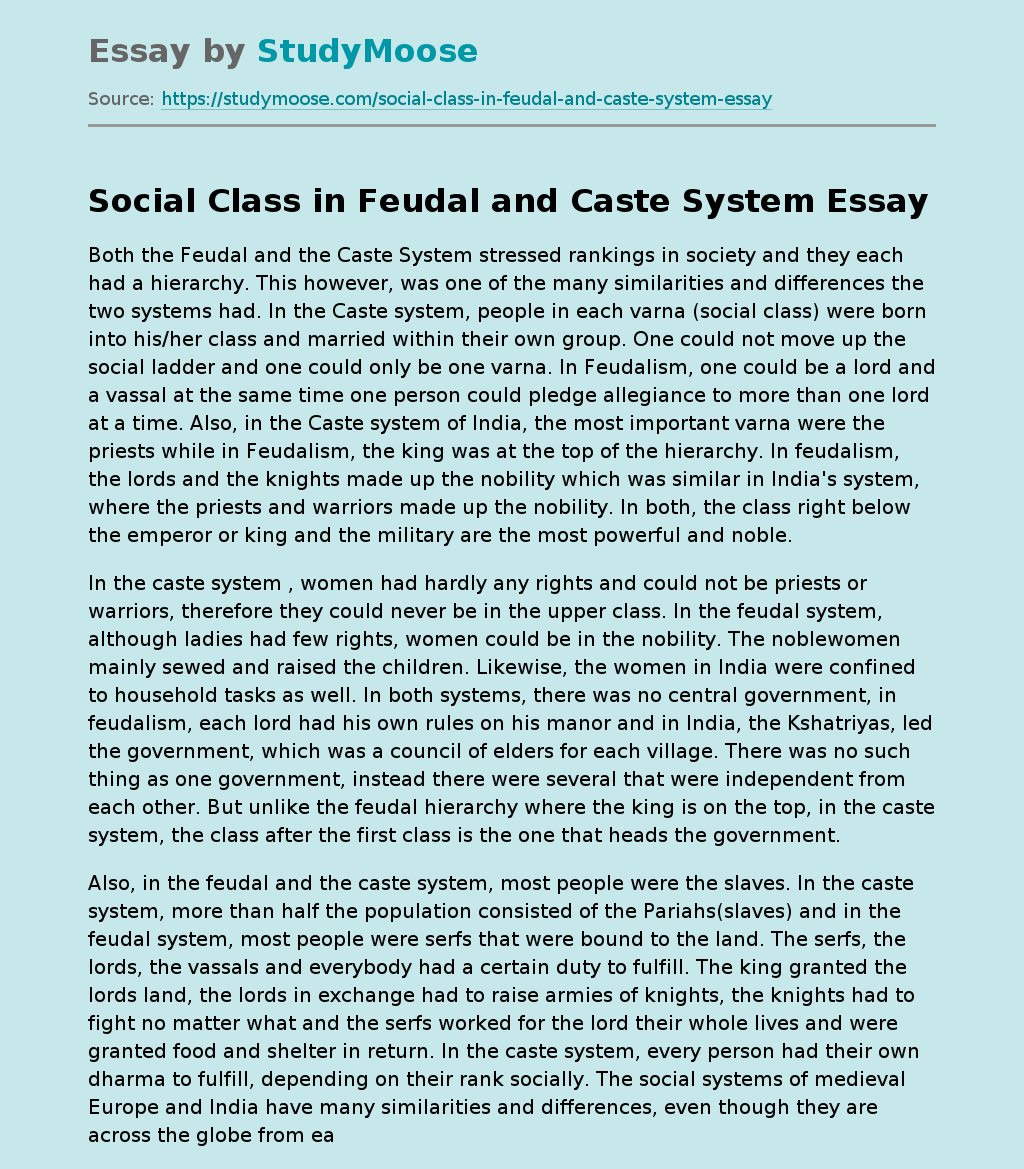