Compare and contrast of feudal systems in Japan and Europe

Japanese feudal system during the Kamakaru Shogunate from 1100 to 1868 and Europe’s feudal system during the middle ages from the 800’s to the 1600’s were similar regarding warriors and weapons, considering that they were based on similar codes of conduct and weaponry, were similar in their socio-political division that had a similar hereditary hierarchy, but the treatment of women differed in that women were allowed to serve in Japanese warrior class but not in the European’s. European knights were very similar to the Japanese samurais; not only were they similar in their codes of conduct, but they had similar weaponry.

Don't use plagiarized sources. Get your custom essay on
“ Compare and contrast of feudal systems in Japan and Europe ”
Get custom paper
NEW! smart matching with writer

The Knights were based on Chivalry which consisted bravery, respect and honor. The Samurais followed a similar code of conduct called bushido meaning “the way of the warrior” which consisted of loyalty, bravery in the martial arts, and honor until death. The similarity in their weapons was the use of swords, horses, small knifes, and armor. Although Europeans had a much heavier armor made of metal which immobilized knights, Japanese armor can still be compared to the armor of the knights.

Reasons for this similarity is that both systems were faced with constant warfare, and their conducts were somewhat based on religion although Japan basing bushido from Confucianism and Europe basing chivalry from Catholicism. The socio political divisions of Japan and Europe are similar in that they are both stratified hierarchy. They both had hereditary classes of nobles, warriors, and peasants and serfs. Constant warfare in both Japan and Europe made the warrior class the most prominent.

In Japan, since the Mongols wanted to attack the Japanese were always prepared and lived in terror. Japanese and Europeans also built protective castles. Like in Europe the kings gave land fiefs to vassals, Shoguns distributed land to his followers. In both feudal systems warriors served local lords. While lords offered payment and protection vassals provided loyalty. Fiefs of land were given in return for military service and therefore knights gained lands from lords as payments for their military service.

Although similar to Europe, Japanese feudal system did not pay samurais with land, but instead paid them a ratio of the earnings from taxing the peasants; usually the Daimyo taxed peasants and owned land. As stratified hierarchies, both had a lowest class who were serfs in Europe and peasants in Japan. In both regions, serfs and peasants were heavily taxed and toiled. One reason for the similarity in stratification was that both Japan and Europe were decentralized. Although Japan and Europe had similarities in their warriors, weaponry, and socio political stratification, the treatment of women varied in each region. Women in Japan were treated more equally; they were able to join the samurai army and were expected to act like a samurai and be strong like men, even if it meant dying after losing a battle. Unlike the costume of Japan, Europeans saw women as fragile, and delicate who were to be protected by chivalrous men.

Compare and contrast of feudal systems in Japan and Europe. (2016, Mar 05). Retrieved from https://studymoose.com/compare-and-contrast-of-feudal-systems-in-japan-and-europe-essay 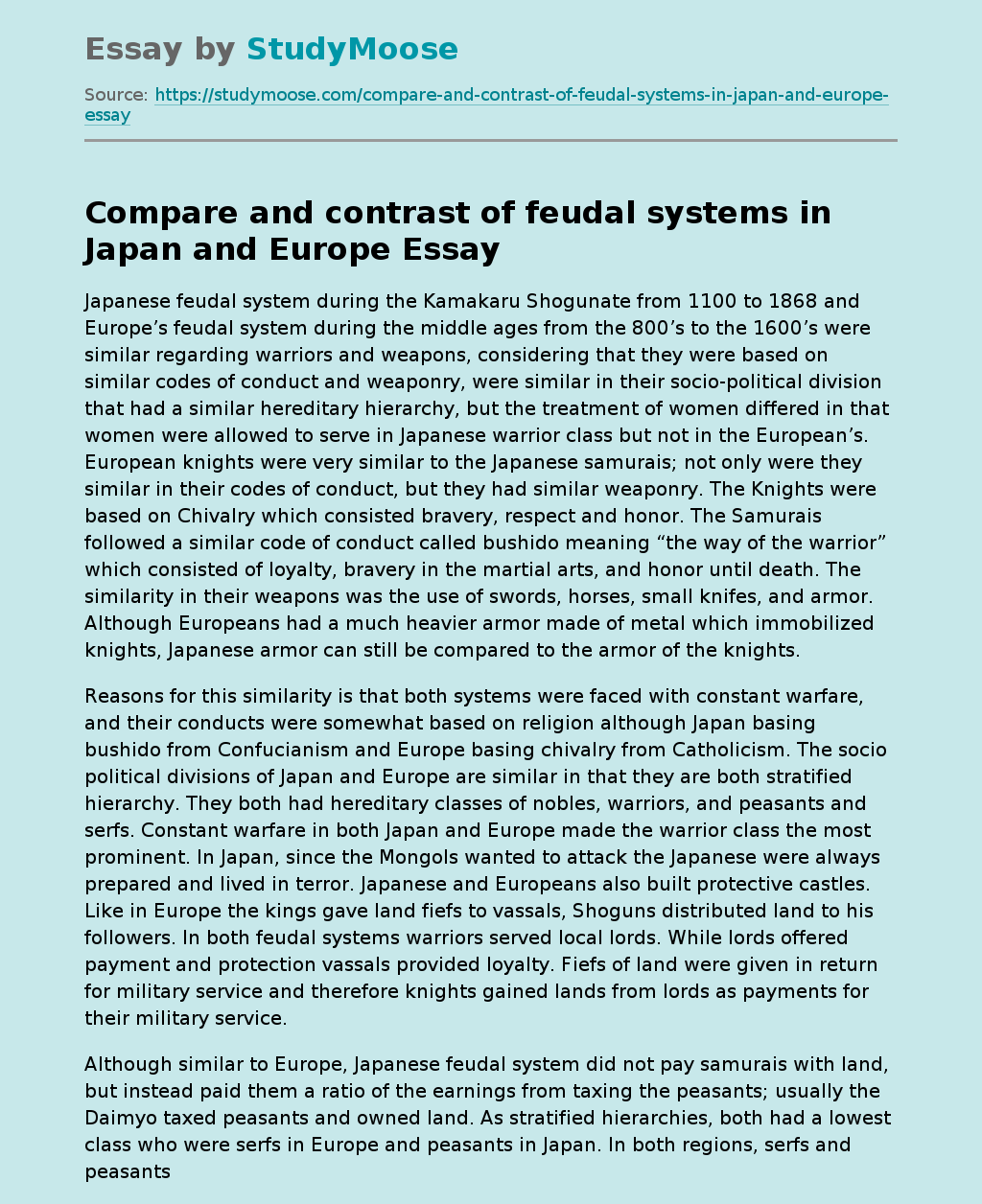