Football = foot + ball. How could a word so simple be so ambiguous? One could only imagine the word football to mean usage of the feet to maneuver some sort of ball. And this is true, in one type of “football” – European football. Football played all over Europe involves people literally kicking a ball with their feet into a net. But when referring to football in America, the game has nothing to do with kicking, or even feet. American football is actually a game with primary focus on throwing, catching carrying the ball with the hands.

Don't use plagiarized sources. Get your custom essay on
“ European football vs American football ”
Get custom paper
NEW! smart matching with writer

In the world of sports, the biggest culture shock when you cross over the pond is the relative popularity of European football rather then that of American football. Football, the name given to both of these games, would never have been called football if it weren’t for the early days when the sports first originated. American football resulted from several major divergences from the European game of rugby in the late 1800‘s.

This American game could just as easily have been called American rugby, but because everyone elsewhere was calling it “football”, the name stuck. Besides, in those days, the game was more more kicking orientated.

It was only when the forward pass was legalized and kicks were limited to those taken from behind the line of scrimmage that the feet began to play a less prominent role in the American game. Professional American football began in 1892. In 1920, the American Professional Association was formed, but changed its name to the National Football League (NFL) two years later.

On the contrary, European football was born in England in 1863, when eleven private clubs and schools met at London’s Freemason’s Tavern and agreed to come up with rules for a game that would differ from rugby, strictly by not permitting the use of the hands.

This game of “football” quickly spread from England to Scotland, Wales and Ireland, all of which had organized football associations in place by 1880. Even though they hold the same name, and began in the same era, people everywhere view American football and European football as two completely different sports. Both of these sports, each being the most popular within their respective origin, attract millions of viewers all around the world. There are Europeans who love American football, and there are Americans who are die hard European soccer fans.

American and European football share several similarities in the rules, terminology, strategy, and competitiveness of the game. But, they also have an even greater number of differences, including the usage of hands, number of players, scoring tactics, field size, game time and much more. To begin, the breakdown of the major football organizations is done completely different. The largest, and most popular football organization in the United States is the National Football League, better known as the NFL. The NFL is then broken into two different conferences.

They are the American Football Conference (AFC) and the National Football Conferences (NFC). Both the AFC and the NFC each currently contain 16 teams each. These 16 teams are then broken into smaller divisions, each with four teams: the AFC/NFC East, North, South and West. The largest, and most popular football organization in England is the English Premier League. The Premier League is at the very top of the English football league system, and is the country’s primary football competition. Unlike the NFL, the Premier League does not have any smaller conferences within the league.

The Premier league is simply made up of 20 different clubs. The Premier League operates on a system of promotion and relegation. This means that every year, the bottom 3 finishers are relegated from the Premier League, to the division below, which is called the Championship. Those 3 teams are then replaced in the Premier League for the next season by 3 of the best teams from the Championship. A major difference between the two games is the usage of padding worn during the game. American football players are covered and protected in padding from head to toe. They wear everything from thigh pads, to chest pads to a big helmet on their head.

However, European football player’s bodies are completely exposed. The only piece of padding they wear are shin guards to shield the lower area of their legs. Penalties, and how they are allocated during the games are also very different. In American football, a yellow flag is thrown onto the field by the referee when something has been done wrong. This way, the whole team suffers from the penalty. In European football, the referee will hand out a series of colored cards to specific players when they do something wrong or offensive. In this manner, only the specific player suffers.

In American football, when a team advances the ball across the goal line, the team is awarded six points, with the chance to add one or two extra points from an extra-point kick or two point conversion. European football teams, however, are only awarded one point for each goal. As a result of this, European football matches are generally lower scoring than football games. The game time of the two sports is differs greatly. American football is split into four 15-minute quarters with a 2-minute intermission between the first and second quarters and third and fourth quarters.

A 12-minute halftime is allowed between the second and third quarters. A separate play clock is then used to limit the offensive time to a maximum of 40 seconds between plays. On the contrary, the plays in European football are continuous. The matches include two 45-minute halves with a continuously running clock and a 15-minute halftime. Because European football is continuous, there are no TV timeouts. This is completely different from American football where they have several TV timeouts throughout the game, in which you are forced to see to see advertisements for McDonalds and Coors Light.

From personal experience, I can honestly say that being a spectator at both games is very different. Living in London, I was blessed with the opportunity, to attend a Milwall (Championship League) football game. The attendance at the match included an extremely high percentage of men. (Being a girl, I even felt out of place. ) Just like many sporting arenas, there were drunk people everywhere. But, I was surprised to find out that alcohol was not permitted in the actual stadium. I live in Philadelphia, Pennsylvania, and attend Philadelphia Eagles game at least once a season.

The Philadelphia Eagles are a NFL team, in the NFC East conference. Attending the Milwall game, and any Philadelphia Eagles game was very different. There are women everywhere at NFL games, and I never feel like I “don’t belong” in the stadium. Alcohol is also permitted in the NFL stadiums, but at most stadiums, it is limited to purchasing 2 containers per persons over the age of 21. I also had the privilege of being in Ireland to watch two of the biggest 7 Nations rugby games. On Saturday 16 March 2013, I was able to sit in a pub with some fellow Irish friends, who live in Cork, and watch the games.

First we watched the Italy vs Ireland game. It was amazing to see how the Irish supported their team to the very end. Ireland had gone into the game with no chance of winning the 7 Nations, but it was still a huge game for the fans, and they supported their team until the very end. The Wales vs England game followed the Ireland vs Italy game. One of my good friends’s (that I was watching the match with) father used to play rugby for Wales. It was such an amazing experience watching the game in Ireland with him. Wales came out and beat England in the end. The pub went crazy and everyone was estatic.

Living in America, it was so amusing to me to see how popular of a sport rugby is all over Europe, especially in Ireland and Wales. Although these two games of “football” include many differences in the ways they are played, they do have share several similarities. American and European football are both team sports that require the collaboration of teammates to reach one common goal. The objective for American football is to score s touchdown, while in European football, a team’s goal is to progress the ball up the field together and put the ball into the opposing team’s net.

But, nonetheless, the objective for both games is to score the most points and win the game. Both American and European football are also very aggressive sports where players are always at a risk of getting injured. Both sports also feature two opposing squads of 11 players. While European football players from a single unit, American football players are assigned to offense, defense, or special teams, but even still there are always 11 players on each team on the field at one time. Although the two games share a common name, they are extremely different.

The biggest difference being that European football players use their feet while American football focus on a the usage of myriad ways to advance the ball with their hands. Other smaller differences that set the two games apart from each other include the scoring tactics, game time, padding worn and much more. But, regardless of all their differences, the two sports share a common objective. That common objective is the goal to score more points then the opposing team and win the game.

Having the opportunity to live in London has made me much more attentive and interested in the game of European football. 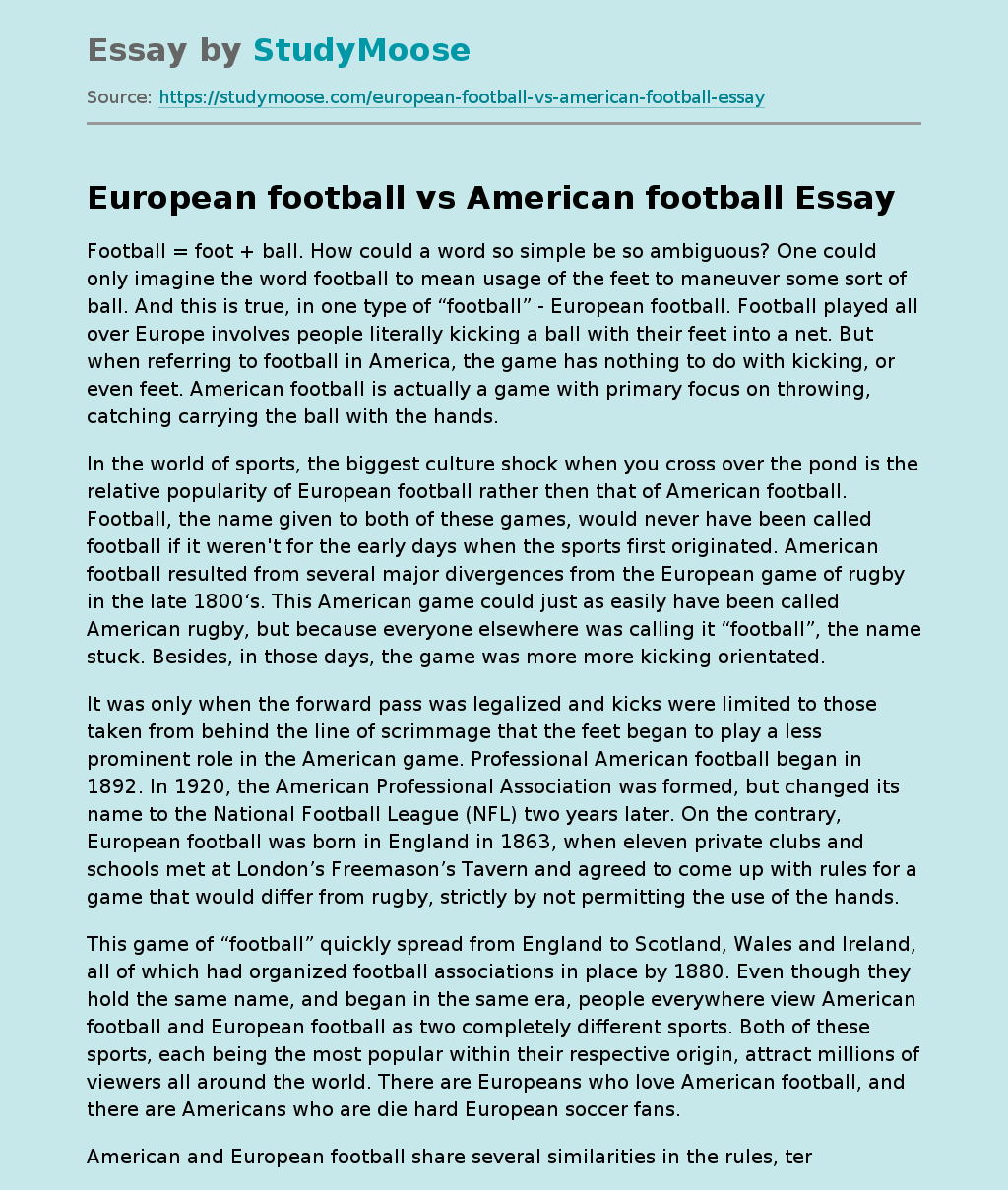