“One who plays a sport fairly and loses gracefully” is how The Merriam Webster Dictionary defines sportsmanship. What is a sportsman? The definition seems to have undergone a big change over the years. If children follow the example set by today’s athletes, the definition would equal a sore loser. High school sports should be a fun way to physically express yourself as an athlete, but at the same time learn some of life’s lessons, like sportsmanship, discipline, and respect.

Don't use plagiarized sources. Get your custom essay on
“ American football and good sportsmanship ”
Get custom paper
NEW! smart matching with writer

In today’s society, winning comes before everything, but if winning requires neglect of good sportsmanship, then nothing is gained in the long run.

Sportsmanship matters not only in sports, but also in the rest of our everyday lives. In any competition, whether a job interview, a school science fair, or even a friendly game of cards with some friends, sportsmanship teaches you to win humbly and lose gracefully. Sportsmanship also helps us to understand each other better, because when we get along, we can listen to the other person’s perspective, and see where they are coming from, and avoid a bad, possibly violent situation.

Almost everyday on the news violence is reported at a sporting event, evidence of bad sportsmanship.

Without sportsmanship there would be no sports, because no one would want to compete with a person who when they lost, would throw a fit, cry, and whine. Young athletes usually learn sportsmanship from an older person, like a parent, sibling, or, probably the most influential role model, a professional athlete on television.

Unfortunately many role models now days are planting the idea of gamesmanship, instead of sportsmanship into the heads of young athletes. Gamesmanship is commonly known as the art of winning games, pushing the rules to the limit, and using whatever means, to gain the advantage over your opponent.

Coaches are constantly demonstrating how to be a badsportsman. They walk up and down the sidelines screaming at referees, players, and if provoked, the fans. Professional football players should enjoy the game, but dancing in the end zone after every touchdown is not the ideal way for a role model to present themselves. How can children be expected to learn good sportsmanship if their role models are telling them to “win at all costs” or “just do what ever it takes (to win)?

” Athletes and sports- crazed parents should remember that whatever the situation, it is just a game, because without good sportsmanship in activities, the lessons learned lose their value. Michigan State University’s report, “Sportsmanship: Building Character or ‘Characters’? ” on the Youth Sportsman Institute webpage, explains the basic idea of how the role of children’s participation in sports affects their sportsmanship. The report gives examples of how good sportsmen, and bad sportsmen are viewed by society.

The Youth Sports Institute says, “participation is viewed as a double-edged sword that may have either negative or positive effects on the child”(“Sportsmanship”,1) and that “the critical factor in determining whether the youth sports experience has a positive or negative effect on children is the quality of adult leadership”(“Sportsmanship, 3). The story “Friday Night Lights”, written by H. G. Bissinger, gives examples of bad sportsmanship, like the Youth Sportsman Institute suggests. “Friday Night Lights” is a story about a football-obsessed town in Odessa, Texas.

The whole story expresses winning or losing the game as a life or death situation. In Odessa, bad sportsmanship isn’t just a problem for the athletes; it is a town-wide disease. The coaches talk bad behind their player’s backs, while the fans litter the head coaches yard with for-sale signs, blaming him for losing the big game. The first instance of bad sportsmanship in the story is where Bissinger describes what was said to Boobie Miles during the previous week’s football game. One of the Cooper Cougar’s players said, “Com’on, you tough motherfucker, com’on lets see how tough you are! ” and “you ain’t nothin’ but a goddamn pussy!

” In the Youth Sportsman Code, these comments would definitely fall under “the making sarcastic remarks about opponents” and “the swearing at opponents” sections in the unsportsmanlike category. Bad sportsmanship occurs again in “Friday Night Lights” when the quarterback throws a bad pass as the last seconds tick off of the game clock. One of his teammates curses him, when the right thing to do would be to say something like, “good effort, better luck next time”. “If the team is in a championship game and a star player violates a team sportsmanship rule which requires removal from the game, the rule must be enforced.

” (“Sportsmanship”,3) The Youth Sports Institute says to reinforce sportsmanship behaviors and penalize unsportsmanlike behaviors (“Sportsmanship”,3). The coaches should have disciplined Boobie when he was angry and threw his shoulder pads against the wall, instead of ignoring him. Another example of bad sportsmanship displayed by the Odessa coaching staff is when they talked bad about Boobie behind his back “most of the other members of the Permian football staff privately called him lazy, and stupid, and shiftless, and selfish, and casually called him just another “dumb nigger” if he couldn’t carry that football under his arm.

” Coaches should always be positive towards their athletes, regardless of their personal opinion. “He sat on the bench, his eyes staring strait ahead, burning with a mixture of misery and anger as it became clear that the coaches had no intention of playing him tonight, that they were willing to test his knee out in the meaningless runaways, but not in the games that counted. ” Boobie hurt his knee earlier in the season, and was not as fast as he was the year before, so the coaches benched him during the games that counted. The sportsmanlike approach to this is letting all athletes play regardless of their skill, or past experience.

Ideally, society wants everyone to be a good sportsman, but realistically, in the heat of battle, with your adrenaline pumping, you will do what ever it takes to win. Until role models realize that they are role models, and start doing what is right, bad sportsmanship will continue to exist. When you do not have good sportsmanship, you will not have fun when you compete in sporting events. Athletes and fans need to remember life is not all about sports. If you give it your all, and lose, you should not get mad at yourself; it is not the end of the world! Go back out there and try harder and maybe you will win next time. 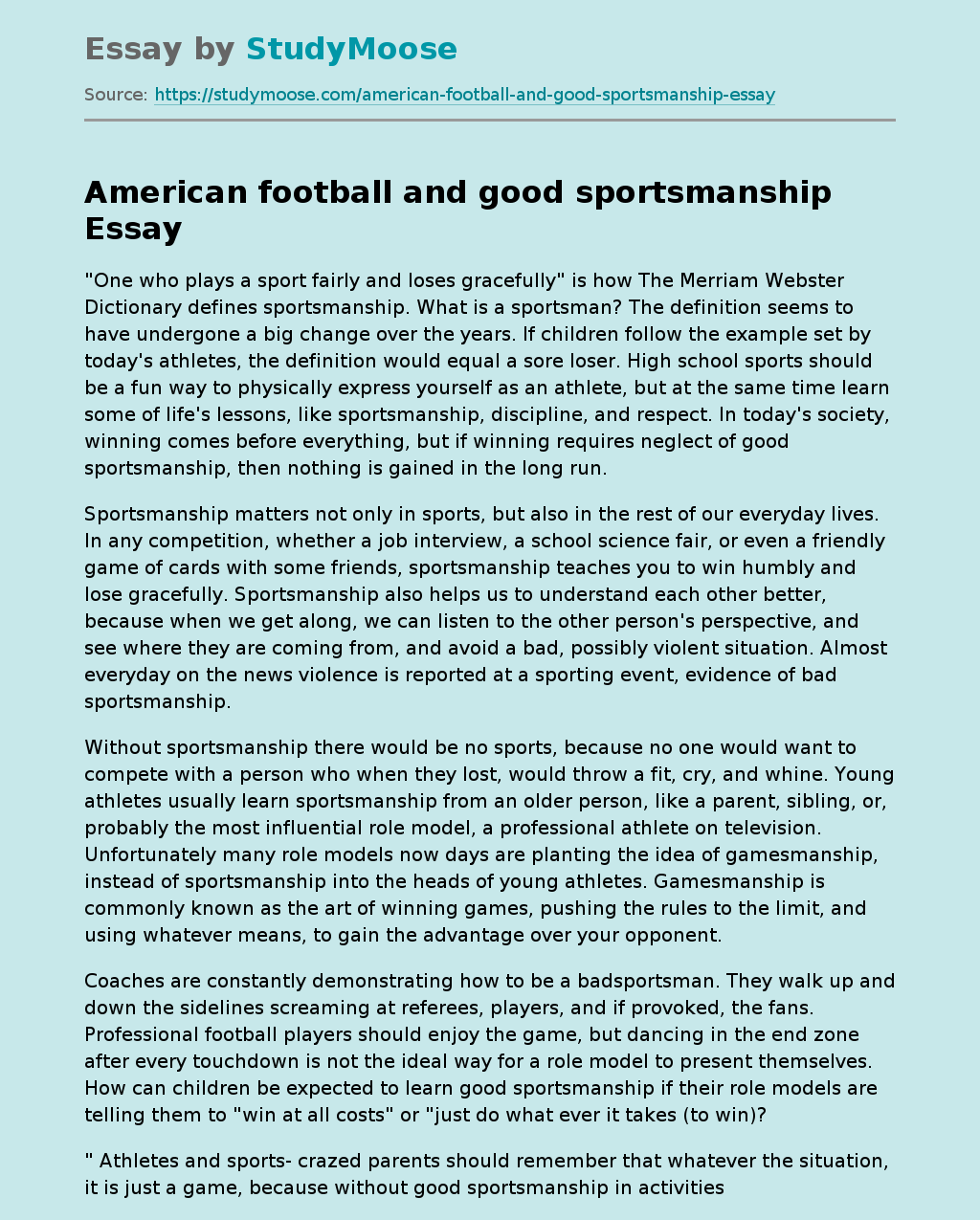