Friends. Good friends – and such good friends.
The text under analysis is an essay Friends. Good friends – and such good friends. Written by Judith Viort. It belongs to the publicistic functional style. As professor Galperin defines it, “an essay is a literary composition of moderate length on philosophical, social, aesthetic or literary subjects. It never does deep into the subject but merely touches upon it.” The most essential feature of the essay is personality of approach to the subject of study and relative freedom and naturalness of expression, which is definitely contrary to the scientific way of presentation.

Don't use plagiarized sources. Get your custom essay on
“ Friends. Good friends – and such good friends. ”
Get custom paper
NEW! smart matching with writer

The language peculiarities of this stylistic variety are:

* Laconism of expressions;
* First person narrative;
* Wide use of connectives;
* Abundance of emotive words;
* The use of stylistic devises and expressive means which are as a rule trite: the exception is descriptive type of an essay. There is a difference between an essay and a speech. An essay is more lasting and it bears more responsibility if compared to speech calculates for immediate effect.

Essays presuppose an individual approach to the interpretation of facts. The essay we deal with may be referred to the descriptive on the one hand as the author describes different types of friendship and also reflective because the author contemplates about the types of friendship, referrers to her own experience and referrers other people experiences as well. The title of the essay is Friends. Good friends – and such good friends. The author introduces the subject matter of it. It already becomes clear that she is going to classify types of friendship Friends.

Before starting her classification Judith Viort describes her attitude to a classical type of friendship, the way she used to treat friendship: “Women are friends, I once would have said,…” then goes a classification with the help of imperative sentences: “Convenience friends.” Where she explains to the readers that we all have people whom we cross everywhere we go and that’s why we have to communicate with them. “ Special-interest friends.” – people who happened to visit the same places of interest that we do. “ Historical friends.” – people who know us since our childhood. “Crossroads friends.” – people who will be always our friends for those years, dramas and dreams they once shared. “Cross-generational friends.” – friendship between people who are much older or younger than we are. “Part-of-a-couple friends.” – people whom we never see alone, they are always with someone. “Men who are friends.” – except friendship there is always some flirt. Considering this last type of friendship I agree with the statement that: “the sexual part, though small, is always some, it’s always there when a man and a woman are friends.” I think there can’t be just friendship between a man and a woman, there is a part of flirt too. “There’s always sex hiding away somewhere inside a friendly relationship between a man and a woman,” said Lilian Rubin, a sociologist. “A sexual undertone of friendship makes it especially attractive or even sensual. Relationship experts have said. “The belief that men and women can’t be friends comes from another era in which women were at home and men were in the workplace, and the only way they could get together was for romance,” explained Linda Sapadin, a psychologist in Valley Stream, New York.

To make her essay brighter Judith Viort resorts to a number of stylistic devices and though they are not numerous still most of them contribute to the general impression of an essay. The majority of stylistic devises and expressive means are trite and mostly observed on the syntactical level. Judith Viort intentially avoids using authentic stylistic devises and expressive means as she pursues the aim not to impress the reader by her eloquence but to share her idea as far as friendship and its varieties is concerned. She employs a number of parallel constructions based on anaphora to lay emphasis on a repeated word: “Women are friends, I once would have said, when they totally… “ and “Women are friends, I once would have said, when they share…” There are also parenthesis to give an additional information: “Women are friends, I once would have said, when they totally…” and “…and run – no questions asked – to help each other…” She also uses polysyndeton to increase the rhythm of prose: “…love and support and trust each other, and bare to each other secrets of their souls, and run…and tell harsh truths to each other…” There is also an enumeration in the text to give a wider picture to the reader: “…Ingmar Bergman, plus train rides, cats, warm rain, charades, Camus, And hate with equal ardor Newark and Brousels sprouts and Lawrence Welk and camping.” Except an enumeration there is also a semantic false chain in this sentence and polysyndeton in the end of it(repeated –and – ) . Tautologies are also presented: “…a friend is a friend all the way..” and “Convenience friends are convenient indeed.”

The author uses an inversion in the text: “For the friendship I have and the friendship I see are conducted at many levels of intensity…” There is also some epithets: “all-the-way”, “a next-door-neighbor”, “shopping friend”, “Tuesday-doubles friends”, “public face”. We come across parenthesis again: “These are women with whom, if our paths weren’t crossing all the time, we’d have no…” and “But we don’t, with convenience friends, ever come too close…”Plus emphetic usage of – too –. Anaphoric repetition: “They’ll…They’ll…They’ll…They’ll…” There is also parallel construction based on anadiplosis: “…being overweight but not about being depressed…being mad but not blind with rage…we’re pinched this month but never that I’m worried sick over money.” And this sentence is also an antithesis.

We come across an example of enumerational polysyndetum: “…an office friend or a yoga friend or a tennis friend or a friend from the Women’s Democratic club.” We also found lots of quotations in the text such as: “I’ve got one women friend,” says Joyce, “who likes, as I do, to take psychology courses…” Anaphora: “It’s fun to go with someone you know and it’s fun to discuss what you’ve learned…” There is a tautology again: “I’d say that what we’re doing is doing together, not being together.” Emphatic construction: “…a woman who knows exactly where to buy what…” Also we come across emotional parenthesis: “But since (oh, shame!) Polysyndeton: “…when our family lived…when our dad was out of work…when our brother Allie got in…when our sister married…” The author uses periphrasis to emphasize the features of the object in question: “Who knows how we looked before our teeth were straightened.”

There is also chiasmus in the text: “What this friend means to me and what I mean to her…” We come across an asyndeton in the text: “A time, perhaps, when we roomed in college together; or worked as eager young singles in the Big City together; or went together….” Anadiplosis is used to make emphasis on the object: “Crossroads friends forge powerful links, links strong enough…” Parenthesis: “…to be revived – and though we may rarely meet, whenever we do connect…” and: “She thinks – and I agree – that the sexual part…” There is also an emphatic construction in the text: “who has lived very hard, who is wise, who listens well, who has been where I am…and who represents not only…” Antithesis: “But the fact that our feeling on seeing each other…and the fact that we spend half…” Enumeration plus gradation: “There are medium friends, and pretty good friends, and very good friends indeed…” Parenthesis: “The best of friends, I still believe, totally love and support..” with emphatic – still – And chiasmus in the end: “…as I am for them and as they are for me…” As for the idea of the essay I may say that the publicist Judith Viort feels sorry about lack of a true friendship, she misses it because nowadays true friendship is a real treasure in our cruel and violent world. I agree with the essayist’s point of view due to types of friendship and value of it nowadays. I think that friendship is a gift and not everyone can appreciate it and that’s why very often we lose good people because we just didn’t realize how lucky we were having them. From my point of view this essay is written in an ironic tone because there are lots of different examples woman’s friendship and lots of quotation of glamorous women. 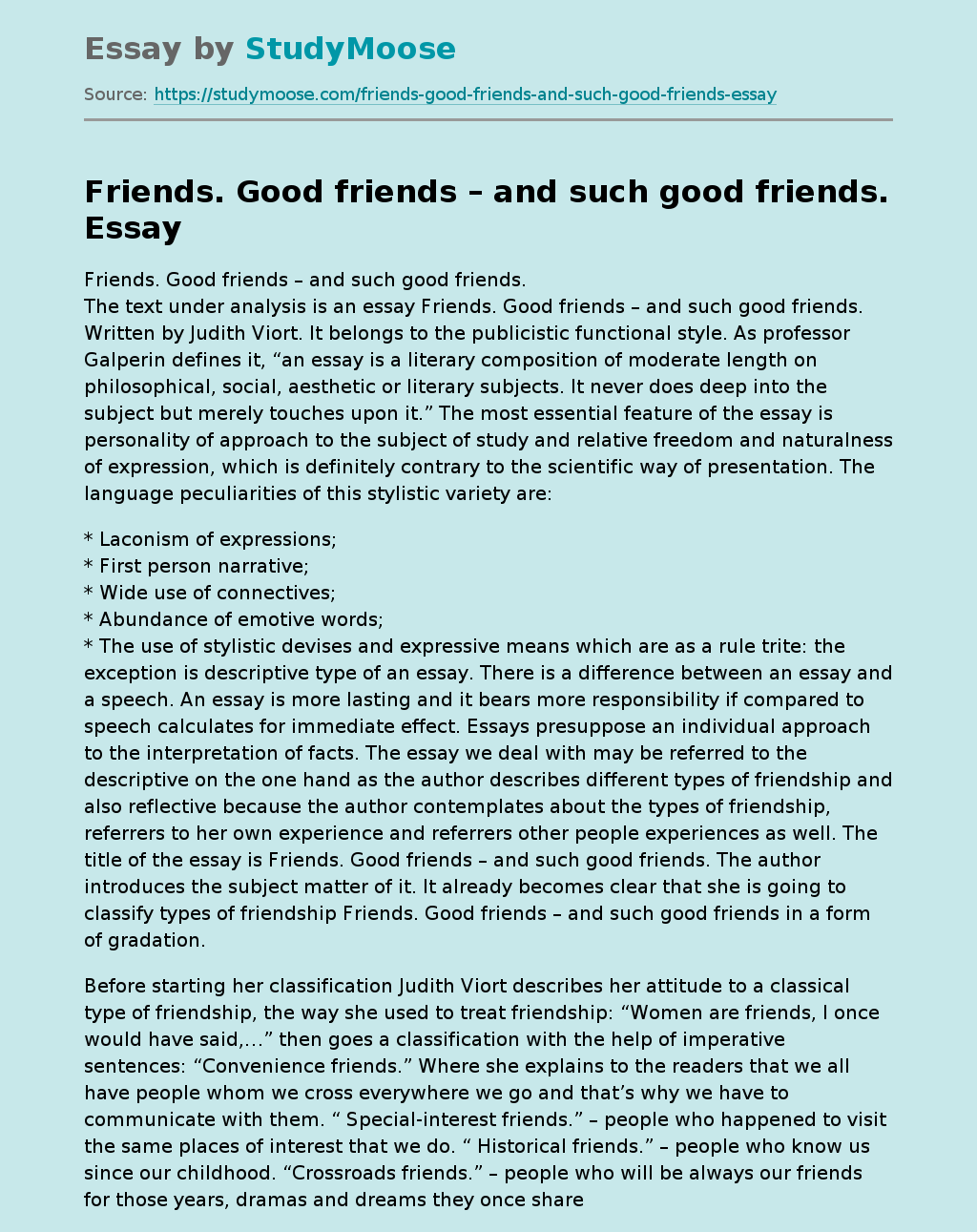