Why is Banquo such an important character in Shakespeares play Macbeth?

Banquo serves as a dramatic foil to highlight the character of the title role of Macbeth. There are superficial similarities between the two characters, but, beneath the surface, there is significant contrast between them. The use of contrast as a dramatic device is an effective way to focus the audience’s attention on the aspects of Macbeth’s character Shakespeare wants to emphasise.

In the beginning of the play, Banquo is presented as a parallel figure to Macbeth. Both have fought courageously for their King and are good friends.

Don't use plagiarized sources.
Get Your Custom Essay on Why is Banquo such an important character in Shakespeares play Macbeth? Just from $13,9/Page

Both have promises made to them by the Witches. But there the similarity ends. Banquo is loyal, wise, truthful and honourable. Macbeth is dishonest, power-hungry and weak. It is significant that Macbeth receives the title of the former traitor, Thane of Cawdor. Both are multi-faceted characters, however.

Shakespeare was able to create three dimensional roles and Macbeth still has redeeming features: he has pangs of conscience, for example, and it is he who tells us about Banquo’s goodness (his ‘royalty of nature’), showing that he can still distinguish good from evil.

Banquo, on the other hand, stays silent about the meeting with the witches and does not reveal his suspicions that Macbeth ‘playdst most foully’ to be King. We wonder if this is because he was told his own sons would be kings. Perhaps he has an ulterior motive in staying silent and is not purely good after all. Shakespeare underlines the lure of power throughout the play.

The contrast between Banquo and Macbeth is first made apparent in Act 1 scene 3. Their reactions to the Witches’ prophesies are so different. Macbeth is ‘rapt’ according to Banquo. Banquo links the witches with evil: ‘what, can the Devil speak true?’, showing his wisdom and insight, remaining calm and sceptical. Macbeth, in contrast, is already in tune with the witches, which Shakespeare cleverly suggests by his opening line ‘so foul and fair a day I have not seen’, echoing their own words at the end of scene 1: ‘Fair is foul and foul is fair’. Banquo foreshadows the future by saying ‘oftentimes, to win us to our harm, /the instruments of darkness tell us truths’. He is trying to warn Macbeth that all is not as it seems and thus protect him from evil, but Macbeth will not listen. Banquo appears morally superior to Macbeth throughout the play.

In Act 2 scene 1 Shakespeare uses Banquo’s unease to heighten the sense of foreboding. Banquo talks of his ‘cursèd thoughts that nature/gives way to in repose’ to convey his restless anxiety. This contributes to the rising dramatic tension in the play. Ultimately, Banquo’s trust is in God’s ‘merciful powers’, showing his intrinsic goodness.

In contrast, Macbeth allies himself with witchcraft, murder and secrecy: ‘witchcraft celebrates…’ Banquo’s wisdom shows in his sense of foreboding: ‘A heavy summons lies like lead upon me’. Their relationship has changed and Banquo speaks in short sentences and is artificially polite to Macbeth and wary. He is honest and loyal, wanting to keep his conscience clear. He begins to suspect Macbeth because he clearly states that, whatever Macbeth promises, he will not be tempted into wrong-doing. Macbeth says ‘If you shall cleave to my consent, when ‘tis, /It shall make honour for you.’ But Banquo answers ‘So I lose none/ in seeking to augment it, but still keep/ my bosom franchised and allegiance clear.’

Polanski successfully highlights the contrast between the two men in his film version of Macbeth. The atmosphere is gloomy and sombre, setting the scene of foreboding. The starless sky (‘There’s husbandry in heaven: /Their candles are all out.’), the sounds of dripping water from the rain and an owl hooting add to this use of pathetic fallacy which foreshadows the murder to come. The flickering candlelight falls on the faces of the characters in an eerie way, adding to the tension. Whereas Banquo is in the open and acting kindly with his son, Macbeth is furtive and hiding, spying on Banquo before he shows himself. Banquo carries his bedding as if it is the ‘lead’ of the ‘heavy summons’ which he speaks about. He is made to speak calmly and politely, with dignity. Macbeth is nervous and shifty.

He follows Banquo, highlighting Banquo’s moral superiority. Banquo stands up on the stairs while Macbeth walks through puddles and is physically and morally on a lower level in the scene. Banquo faces the camera, with nothing to hide, whereas Macbeth is often facing away from our view. Macbeth follows Banquo up the stairs and towards the bedchamber as he airily lies: ‘I think not of them’. Macbeth tries to bribe Banquo with ‘It shall make honour for you’ and gives this a rising inflection which stresses the bribe. Banquo is made to bristle slightly and shows he has completely understood and rejected Macbeth’s offer with his cold, clipped tone of voice when he answers. He clearly shows his refusal to compromise his values of honesty and integrity by turning away. He is cautious and wary of Macbeth now and their relationship has been damaged. Trust has been lost.

There is no music in the first part of this scene. We are kept in suspense. The sound effects of the dripping rain and the owl are more effective because of the absence of music. As Macbeth seems to leave reluctantly in darkness, Banquo’s face is in the light with nothing to hide. He gives Macbeth’s departing figure a long and speculative look, showing that he has seen through Macbeth’s behaviour and mistrusts him.

When Macbeth is alone the owl hoots and the water dripping is louder. His face is half hidden by a wooden beam and in ‘chiaroscuro’. He is still and gloomily pensive for a long moment, just with the dripping soundtrack. Only when the dagger appears we hear the first music of the scene. This makes the moment even more effective. It is low, string music at first which becomes more discordant and disturbed as the scene progresses. Being a film, Polanski can make the soliloquy heard but not actually spoken, as Shakespeare intended the innermost thoughts of a character to be heard. He only speaks on the film when he’s directly looking at and holding the real dagger, which makes his coming down to earth more marked. The imagined dagger looks silver and temptingly shiny and pure. Again, Macbeth is furtive and secretive, in semi-darkness in this part of the scene. Polanski emphasises his dark and corrupted nature in this way.

In Act 3 scene 1 we hear Banquo’s thoughts about Macbeth before we hear or see Macbeth himself. Banquo does not praise Macbeth’s character; on the contrary, he says ‘I fear /Thou play’dst most foully for’t’, showing his suspicion of Macbeth. He is the only person who links Duncan’s murder with Macbeth. In contrast, when Macbeth speaks of Banquo he talks of his ‘royalty of nature’, his ‘wisdom’ and his ‘valour’. These parallel private thoughts make the characters of both men even more emphasised. Banquo is wise and has insight to the truth. Macbeth recognises the good in Banquo and his own weakness and faults are highlighted in comparison.

To sum up, Banquo represents honour and wisdom in the play. He serves as Macbeth’s conscience. This becomes apparent when he reappears as a ghost – a manifestation of Macbeth’s guilt. He is essential as the character who places Macbeth’s ‘black and deep desires’ into sharp relief through his goodness and integrity.

Why is Banquo such an important character in Shakespeares play Macbeth?. (2017, Oct 15). Retrieved from https://studymoose.com/why-is-banquo-such-an-important-character-in-shakespeares-play-macbeth-essay 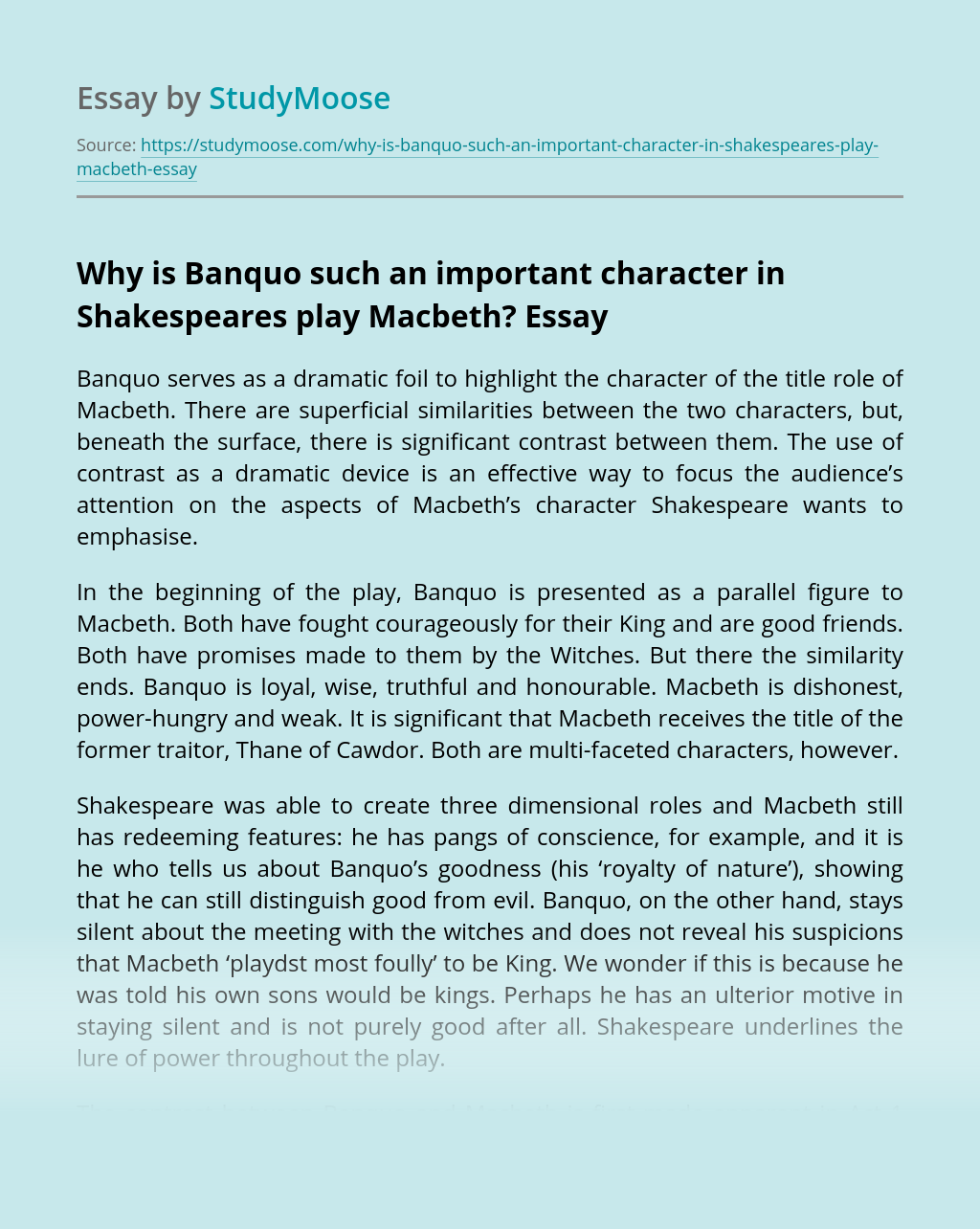 Wes Hayden is essentially a weak man. Is this how you view him?

In the novel Montana 1948 we learn of a character named Wes. Throughout the story we are given detailed information about Wes’ personality. Wes is neither a strong nor weak man. As many people, he has certain aspects of his character that portray weakness, and other aspects that portray strength. There are not many people...

The article by Brown elaborates on traditional symbolic interactionism. Goffman was mainly interested in social self in the society that constitutes of individual personality formation. His notion of self involves engaging in purposive forms of activities and impressions. According to Goffman’s dramaturgy, there are various schools of interactionist analysis. People try to manipulate themselves and...

Death of a Salesman by Arthur Miller

After reading the play, I think that there are many feelings evoked towards Linda. There is pity and sympathy and some resentment at her denying Willy the chance to work in Alaska. She is a hard-working wife and loving mother. One could blame her for Willy’s suicide but this would be harsh, as she feels...

How does Shakespeare make Lady Macbeth into such a Dramatic Character

Creating a character like Lady Macbeth who is ahead of her time, domineering and so far away from the 16th and17th century stereotypical women, is a fantastic achievement for Shakespeare. Lady Macbeth’s character is not too dissimilar to that of a witch as many aspects of the things she does and the language and imagery...