How is Lady Macbeth an important and memorable character in Macbeth?

Lady Macbeth is an important and memorable character in Macbeth because she sets up the story by persuading Macbeth to kill Duncan. She also is memorable because she almost controls Macbeth at the start of the play which is unusual in the time of the play, as women usually didn’t have much say in relationships. Her role in the play also highlights Macbeth’s loneliness without her.

Lady Macbeth is the catalyst for her husband’s downfall, as she pushes him to kill King Duncan.

Don't use plagiarized sources. Get your custom essay on
“ How is Lady Macbeth an important and memorable character in Macbeth? ”
Get custom paper
NEW! smart matching with writer

She tells him to, “look like th’innocent flower but be the serpent under it.” Talking about Duncan she also says, “O never shall sun morrow see.” She also hints he is not a man unless he kills Duncan (this is a recurring theme in the play), “When you durst do it, then you were a man.” This also shows she represents evil at the start of the play; she plays on his ambition and drives him to become a murderer.

Lady Macbeth represents evil at the start of the play, this is highlighted when she says, “Fill me…topfull of direst cruelty” and “pall thee in the dunnest smoke of hell.” She also would have scared the audience at the time because she and the witches were controlling a powerful man. She also comes across as wanting to be more masculine when she says, “unsex me here” and “come to my woman’s breasts and take my milk for gall (bile).” She also repeats the word “come” as if she is summoning evil spirits in her speech in act 1 scene 5 such as when she remarks, “Come, you spirits that tend on mortal thoughts.

” This speech makes the audience relate her to the witches because she is so evil.

Later in the play, Lady Macbeth starts to echo her husband’s reaction to the murder of Duncan. The main example of this is the symbol of hand washing, in act 2 scene 2 Macbeth says, “Will all great Neptune’s ocean wash this blood from my hands? No: this my hand will rather the multitudinous seas incarnadine.” Then in act 5 scene 1 Lady Macbeth remarks, “Here’s the smell of the blood still; all the perfumes of Arabia will not sweeten this little hand.” This scene also shows she realises what she pushed her husband to do has turned him into a murderer, “The Thane of Fife had a wife. Where is she now?”

Macbeth sees life as a pointless succession of days after Lady Macbeth commits suicide in act 5 scene 5. This is shown in his speech in that scene where he announces “It (life) is a tale told by an idiot full of sound and fury, signifying nothing,” Also, “All our yesterdays have lighted fools the way to dusty death,” and “Out, out brief candle.” This shows that Macbeth sees no point or direction in his life without Lady Macbeth.

Lady Macbeth realises that killing the King hasn’t brought them the joy they thought it would. This is summed up when Lady Macbeth says, “Noughts had, alls spent,” and when she says, “Tis safer to be that which we destroy,” in act 3 scene 2. This shows us her regret of pushing her husband to kill the King as they have gained nothing and envy to be him. These things drive her to her madness, as she realises what they have done has sealed their fate. This is an echo of what her husband says in this scene, “full of scorpions is my mind,” “After life’s fitful fever, he (Duncan) sleeps well.”

Lady Macbeth appears to be the stronger person in the aftermath of the murder of Duncan and rubbishes Macbeth’s guilt and regret, she remarks “Infirm of purpose!” “My hands are of your colour, but I shame to wear a heart so white,” “A foolish thing to say a sorry sight,” and “These deeds must not be thought after these ways; so, it will make us mad.” The last of these quotes is ironic as when she does think back on it later in the play she goes mad herself! This reiterates the fact that she wants to be in control of him, and this would have been scary for people of Shakespearian time for men were far superior to women, especially Kings.

Lady Macbeth still believes Macbeth is weaker than her up to act 3 scene 4 where she says “are you a man?” when he sees the ghost of Banquo. She then questions his manhood again by saying, “A woman’s story at a winter’s fire authoriz’d by her grandma. Shame itself!” and “What, quite unmann’d in folly?” This is a recurring theme of the play, but in the end they both end up dead cowards anyway.

To conclude, Lady Macbeth is probably the most important character in the play as there would be no storyline if she hadn’t pushed Macbeth to kill Duncan. Lady Macbeths control over him is lost in act 4 and Macbeth then lives off the witches’ apparitions, and becomes crazier as she does. Lady Macbeth and the witches play on his ambition and ego and eventually bring him down to his inevitable death at the end of the play.

How is Lady Macbeth an important and memorable character in Macbeth?. (2017, Oct 23). Retrieved from https://studymoose.com/how-is-lady-macbeth-an-important-and-memorable-character-in-macbeth-essay 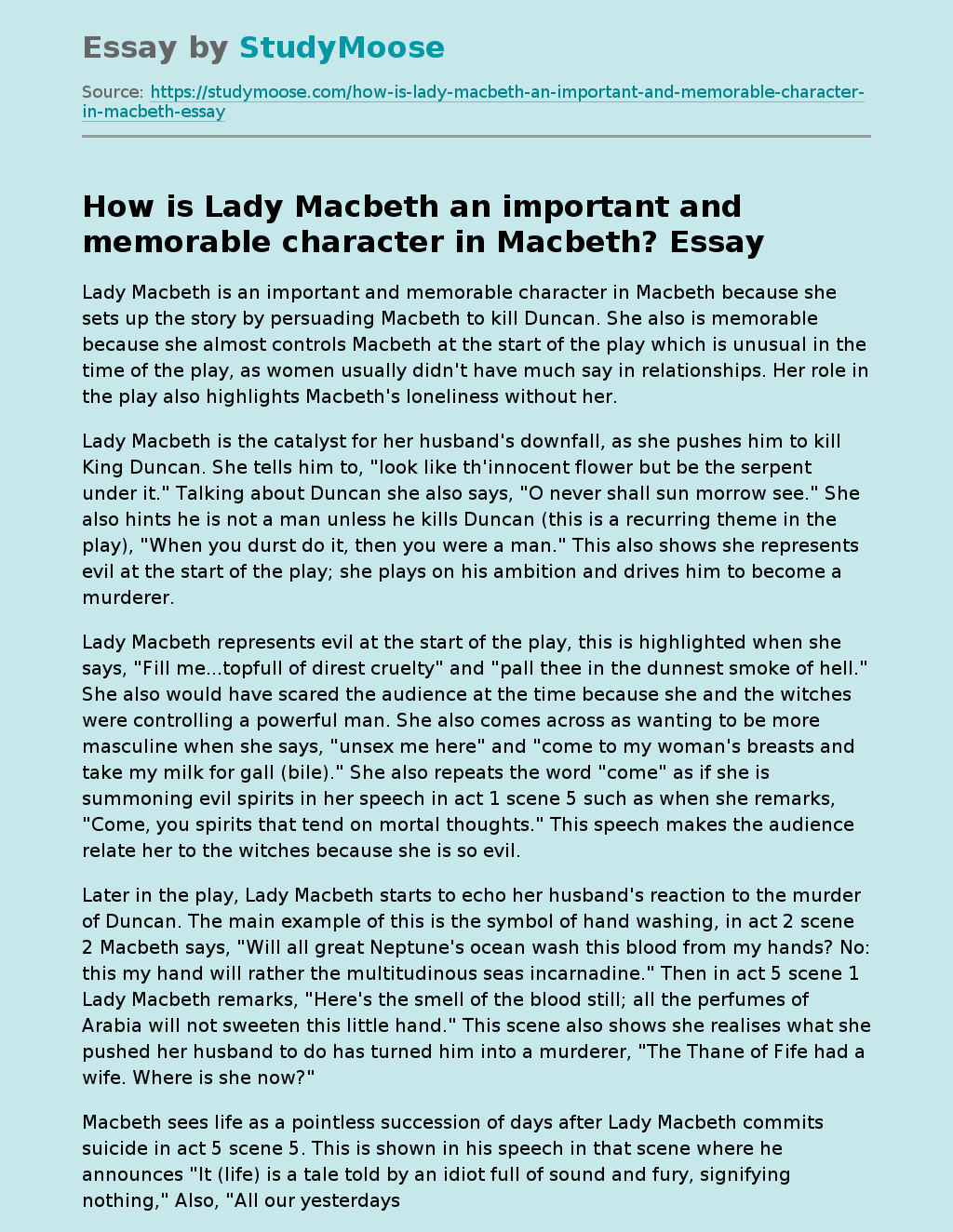