Shakespeare cleverly creates sorrow for Lady Macbeth and Lady Macduff through various techniques such as order of their scenes, their company on stage and most importantly by their circumstances. In the case of Lady Macbeth we know her from the start of the play while in the case of Lady Macduff we are introduced to her with no prior knowledge only in Act 4 scene 2. Moreover with the use of dramatic irony Shakespeare lets the audience know certain events about to happen which naturally influence the emotions of viewers.

Don't use plagiarized sources. Get your custom essay on
“ Lady Macbeth and Lady Macduff ”
Get custom paper
NEW! smart matching with writer

Even though we feel sorrow for both the ladies there is a considerable difference in the range and type of sorrow. The basic similarity in their situation is that they cannot be helped. Shakespeare uses the basic human tendencies such as the urge to help the helpless, who in this case are both the Ladies, to amplify the feelings of sorrow and pity.

She is angry with her husband for fleeing the land without them as can be inferred from lines 8-16. She feels that he has left them in mortal danger. Thus we know that the overriding emotion she experiences is fear. The fact that he ran away without any obvious reason scares her more. The audience already knows through Macbeths words- the castle of Macduff I will surprise..,give to the edge of sword his wifes, his babes, and all unfortunate souls that trace him in his line (act4 sc1 171-174) that he is going to massacre Lady Macduff and her children.

We come to know a lot about this woman through the company of people that Shakespeare places with her. First of all we have Ross who clearly as her cousin does her the honor of visiting her and comforting her. His replies to all of her questions are short and terse. They do not give any new information but do the task of soothing her feelings. His words in lines 25-30 I take my leave of youTo what they were before.-My pretty cousin, Blessing upon you indicate that she is a woman of honor and he does not wish to stain that honor by staying longer with her considering that she is alone.

Next we have her conversation with her son which reveals that she is aware that it is not her sons fault that his father has fled and that she will not blame him for Macduffs mistakes. Lady Macduffs jokes with her son are based on reality, yet are pleasing and tell of a loving relationship between her and her son. Moreover by using the weakest group of people that is woman and children Shakespeare creates an added feeling of sorrow. The entry of the messenger increases the tension and heightens emotions as it is right after a jolly and normal dialogue. His words are the harbinger of evil acts and they warn lady Macduff and advise her to run swiftly to safety. The very fact that the messenger is willing to put his life in jeopardy in order to try to save her life is testimony to her character. Specifically his lines 76-78 To fright you thusis too nigh your person. tell us that he not telling her this cruel truth would be more evil than telling it to her as she was a person of high stature in his eyes.

Her response Whither should I fly? I have done no harm. But I remember now I am in this earthly.Do I put that womanly defense To say that I have done no harm? (Lines 81-87) to the warning shows political awareness and wisdom. At this point she knows that she is about to die and there is nothing anyone can do about it. Her end also tells the audience that she is a loyal wife for in lines 90-91 she says I hope in no place so unsanctified where such as thou mayst find him. . Her son dies so as to give his mother time to run and save herself. Thus Shakespeare creates the ultimate concept of Good vs Evil but instead of allowing good to triumph he lets evil rule. Lady Macduffs death is that of an scared, confused, loyal, loving, honorable, wise and defenseless woman dying a savage death for no reason whatsoever.

On the other hand we have Lady Macbeth with whom the audience has been acquainted for a long time. Till act 5 sc 1 we have always seen Lady Macbeth as an forceful, ruthless and intelligent woman who has no remorse. In this act we see her through the eyes of a doctor and an gentlewoman. It is obvious that she is ill for a long time. Her company is not an jolly one, they are a doctor and a gentlewoman who after hearing and seeing her state of mind pity and feel sorrow for her. The gentlewoman has seen her in this state before whereas the doctor who sees her for the first time is clearly shocked. All her torments and troubles are within her mentally which is why no doctor can cure her. The words spoken by lady Macbeth speak of such darkness and blood that the doctor and the gentlewoman dare not repeat them to anyone else. All of her words in lines 37-42 refer to her past murders and crimes except for the sentence Hell is murky.

Her diction and sentence structure is terse and tense. It is almost as if she reporting all her deeds. It is very different from the loud convincing diction of the lady Macbeth we see in previous acts of the play. Even though she talks of her crimes, she never even once confesses or accepts her crimes. She is also scared and fears the blood spots on her hands will never be cleaned (lines 53-55). She is also extremely afraid of the darkness which is why she has commanded that she always have light beside her. She fears her past actions and that she always pushed Macbeth when he hesitated in murdering. Macbeth had not confided in her about the murder of lady Macduff which suggests that Macbeths taste for murder has outgrown hers.

These fears are shown symbolically through her fear of darkness which compares with evil and her fear of dirty and bloody hands which compares with guilt. What is however heartbreaking and is the greatest factor in creating sorrow for her is that her suffering cannot end. She is locked in a circle of pain and only she can break out of it, no one can help her. The only way out of this circle would be by asking for forgiveness, by redeeming herself in the eyes of god. But to show remorse one needs to be sane and sadly as seen from her sleepwalking and other unnatural acts she is clearly mentally ill. Her pain is never-ending and everlasting. She is bound for hell and she cannot escape it.

When death came Lady Macduff faced it by growing stronger but Lady Macbeth grew weaker. The diction of Lady Macduff drew out fear while Lady Macbeths diction imbibed it. Both the woman undergo intense emotional suffering before they die. Both of them are helpless and isolated. Though people would like to help them they cannot. Both of their husbands are not with them. Macduff went to England thinking that his wife and children would be safe while Macbeth has probably grown so addicted to murder that he has forgotten his wifes suffering. As an audience the impact of these two sorry tragedies is huge and they come right after each other thus amplifying the impact.

By playing upon natural human tendencies, cleverly placing the right characters and creating a sense of helplessness for both women Shakespeare leaves the audience with deep sorrow. Shakespeare also cleverly places brief interludes between intense scenes to increase the overall effect. The emotions depicted are intense and break the hearts of the audience. The death of Lady Macduff is unwarranted while the death of lady Macbeth is too painful and horrific. The main ideas that Shakespeare uses are that we empathise with the weak and helpless, we want to see good triumph evil and that no one wants to give anyone everlasting suffering without a ray of hope. He uses these instinctive human feelings to create sorrow for Lady Macduff and Lady Macbeth. 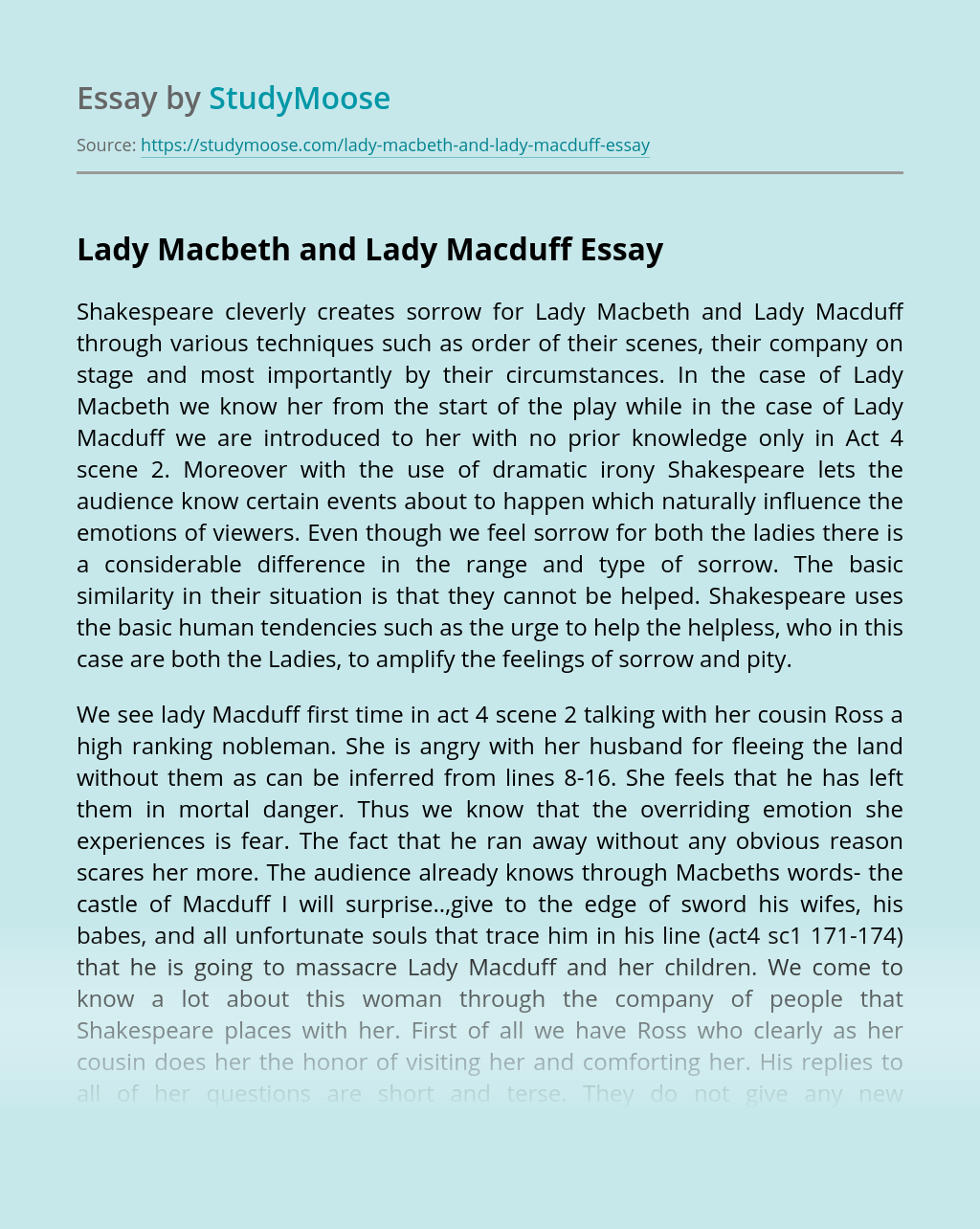