Similarities/Differences of Macbeth, Banquo, and Macduff

Macbeth, Banquo, and Macduff are three characters in Shakespears tragedy, Macbeth. These three characters have some similarities, but ultimately are very different in the choices and decisions they make, and all play a different role in this play. Macbeth is an ambitious Thane who lets his greed and thirst for power overcome his loyalty. Banquo plays a neutral role; he is loyal but capable of some evil. Macduff is a strong, selfless character whose first priority is the good of Scotland.

Get a verified writer to help you with Similarities/Differences of Macbeth, Banquo, and Macduff

All three characters have different beliefs and are fighting for different things; their choices change them and make them all have a different title, hero, or villain. Macbeth is the main character in the play who seems to make all the wrong decisions, he is ambitious, thirsty for power, and ultimately, evil. Macbeth is a very unique character, the thing that differentiates the most from the other characters is the amount of ambition he has. The main ambition that we see is his ambition to become the king of Scotland, he wants more than anything to become king and will do anything to get there.

He first kills the king so he can get the throne, and then kills his best friend to make sure he won’t tell. Most people don’t have heart or dedication to go through with something so evil and would not be willing to do the things he did, it just shows how bad he actually wanted the throne. Macbeths thirst for power was brought on by the witches and there prophecies, and ultimately they killed the king.

If the witches never told Macbeth that it was fate for him to be king, he never would have thought of killing the king, or any of the other people he murdered.

Once he got the hope of becoming king in his head he couldn’t get it out, and with a push from his wife he went through with it, and took every step necessary. Throughout the play Macbeth gets more and more evil and eventually you think of him as the villain of the play. He became the villain when he killed the king, and then got more evil when he killed his best friend Banquo, and reached his peak when he murdered Macduff’s wife and child. Macbeth made many bad decisions and ended up fighting to keep his position of king, not letting anything get in his way.

Banquo is a very different character from both Macbeth and Macduff with very different beliefs and priorities. Banquo is portrayed as a neutral character, not a hero or a villain; he falls right between the two. He is considered neutral because he doesn’t do anything to directly hurt anyone like Macbeth, but his selfishness indirectly causes many preventable deaths. Banquo is a strong believer of fate so he doesn’t reveal the truth about Macbeth murdering the king to anyone; he cares more about the well being of himself than the good of Scotland which is where he gets his evil.

Banquo is naive and ultimately meant no harm, he just wanted success for his kid, and I believe that if Banquo could see the turnout of the whole play he would have done the right thing and stopped Macbeth when he could. Although Banquo is selfish, he is nowhere near the level of evil of Macbeth, and he never meant any harm to anyone, for these reasons he is not a hero or a villain, just neutral. Macduff is portrayed as the most heroic and noble character in the play Macbeth, who ultimately saves Scotland.

Macduff is a thane, and unlike Macbeth and Banquo, his first priority is the good of Scotland. Macduff’s selflessness, love, and pride for his country are what make him to be the hero of the play. Macduff was the first person to take a stand against Macbeth; this is because everyone else was scared of Macbeth and what he would do. I feel Macduff knew going to England to form a rebellion would have consequences but knew that something had to be done about Scotland’s tyrant.

Forming his rebellion in England resulted in the victory against Macbeth, but also the death of Macduff’s wife and son. Every decision that Macduff makes throughout the play is very selfless and is for a bigger picture instead of personal gain like Banwuo and Macbeth, he is fighting for freedom. These displays of pride and love for his country are all reasons why Macduff is the hero of the play. Macbeth, Banquo and Macduff are all very different and all play very different roles. Macbeth lets his thirst for power influence a series of crimes and murders which make him the villain.

Banquo is naive character whose selfishness indirectly leads to many preventable deaths, he never directly does anything to harm or hurt anyone so he is a neutral role in the play. Macduff’s pride and selflessness makes him take a stand against Scotland’s tyrant rule leaving his personal life behind, this makes him the hero of the play. In summary I have tried to explain the three main characters in Shakespeare’s Macbeth and how they define and characterize themselves throughout the play. Each character has strengths and weaknesses but ultimately are all products of the choices they make and are defined by them.

Similarities/Differences of Macbeth, Banquo, and Macduff. (2016, Sep 21). Retrieved from https://studymoose.com/similaritiesdifferences-of-macbeth-banquo-and-macduff-essay

Get a verified writer to help you with Similarities/Differences of Macbeth, Banquo, and Macduff 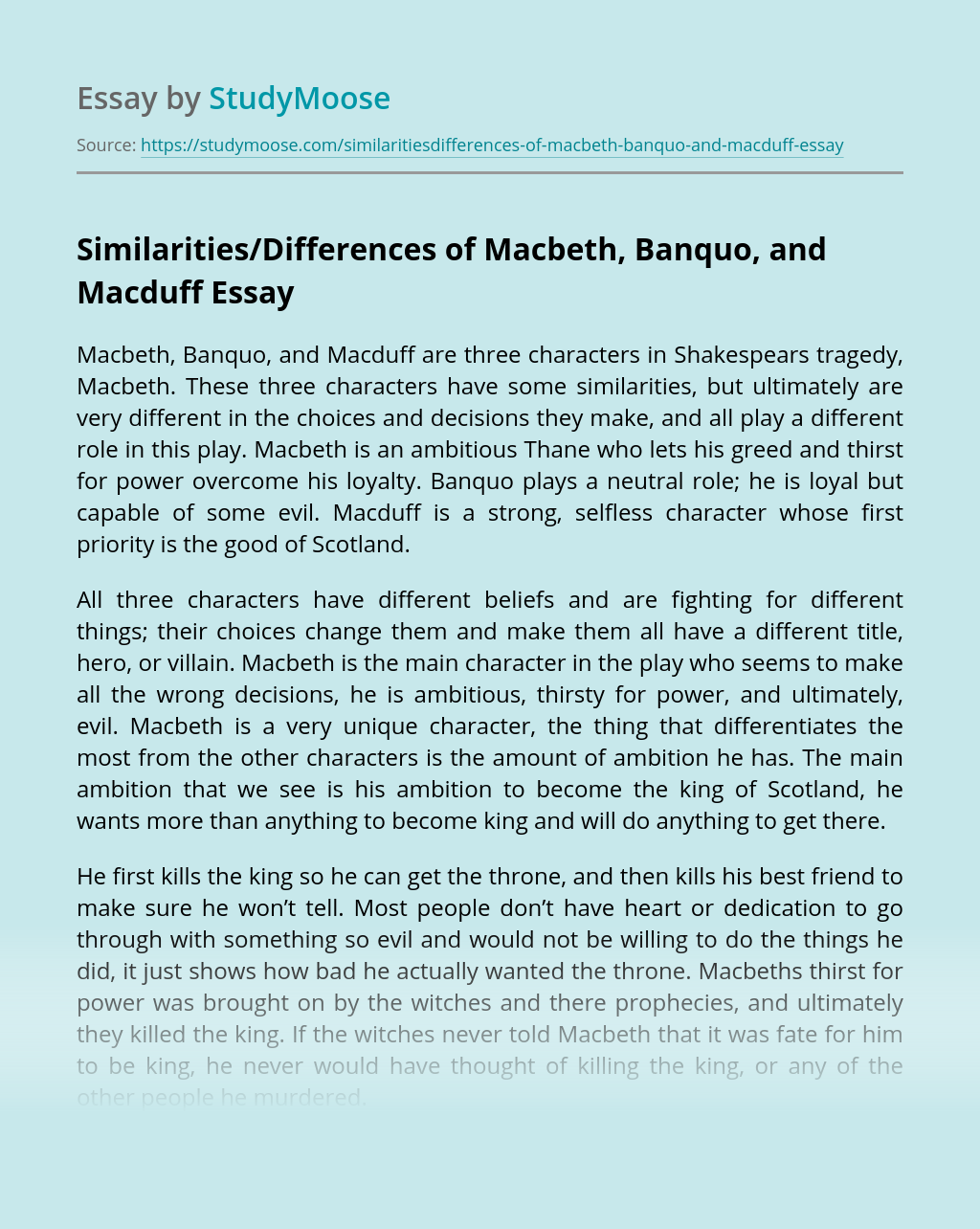 The nature of humanity always forces individuals to choose between right and wrong. Sometimes, there is conflict between personal desires and moral decisions. In the play Macbeth, William Shakespeare illustrates humankind as dark and immoral. He displays the negative side of human nature through three of the main characters. First of all, Banquo who appears...

Relationship Between Machbeth and Lady Macbeth

Throughout the play Macbeth, there is an ongoing relationship between Macbeth and Lady Macbeth. Right away you pick up that Lady Macbeth is a very cold controlling person, while her husband is very naive and weak. The relationship these two share is as what most people would see as unhealthy. There are never any agreements,...

Get Essay
The Role of Masculinity in Macbeth

What makes a good man? A good king? These are not easy questions to answer. Macbeth presents us with two very different notions of manhood, and explores the relationship of masculinity to the role of a king. We are asked to consider whether the best way to govern is with a soft touch, like Duncan,...

I had actually typically heard of the ‘Macbeth Home” and of the brave soldier Macbeth, by whom many a male had fulfilled with his death. At first I had little understanding of Lady Macbeth, however subsequently as a result of our conference today, I have started among the most captivating cases having ever to be...

How does Shakespeare dramatise the murder of Duncan in Act II Scenes (i) and (ii)?

The murder of King Duncan in the play Macbeth is an important part of the play. It shows the point at which Lady Macbeth and Macbeth begin their downfall, which ultimately ends in their deaths at the end of the play. The first and second scenes in Act Two are important because they are immediately...

Where do the witches say they will meet macbeth? Upon the heath-uncultivated plains How do the witches speak? In rhyme,each witch has something to say three times,paradox Paradox statement that seems to contradict itself or to be impossible, but is actually true What is the meaning of “Fair is Foul,Foul is Fair” (witches)(paradox) What is...

How are characters presented as disturbed in Macbeth, Laboratory and My Last Duchess?

It is important to be able to define what ‘disturbed’ actually means in order to answer this question to a high standard of explanation. Disturbed is an adjective and it is the showing of symptoms of mental illness, severe psychosis and neurosis. It is also useful to consider the audiences of each poem or play...