Similarities and Differences of Western and Eastern Religions

If there is one thing that the majority of the world shares in common, that is a religious belief and with a rise in religious Globalization could perhaps someday unite the world from a religious perspective. The internet has become the connection or portal for anyone to become as religiously diverse when it comes to comparing and understanding all religions. Human values and beliefs are pretty much the blueprint or doctrine as to how we live our everyday lives. These values and beliefs are adapted from many things such as customs or traditions, environments they live in or communities, personal morality or simply put, their socio-demographics.

Don't use plagiarized sources. Get your custom essay on
“ Similarities and Differences of Western and Eastern Religions ”
Get custom paper
NEW! smart matching with writer

Even non-religious groups share some of the same beliefs. Identification seems to be very critical as to how one may be viewed when discussing religious beliefs throughout the world. In the western hemisphere, if a person states that they are of Muslim faith, we can easily assess that they are not Christian or Jewish but based on what I’ve learned throughout the chapters about eastern religions their doctrines are not as easy to interpret because their doctrines are more aligned.

So I said that to say this, although there are some similarities between Western and Eastern religions, there are many more differences.

Textbooks defined western religions as being orthodoxy, meaning acceptance of “right beliefs” based on sacred texts/scriptures as explained by religious authorities, and eastern religions being orthopraxy, meaning practice of “right actions” as prescribed by sacred traditions (Page 13). One thing that all religions seem to share in comparison is the belief or faith in a higher being, entity, ideology or “Sacred” and focus more on doing what is right than wrong or good than bad.

No matter what a person’s religious beliefs might be, part of the world they live in or cultural background they may come from, whether western or eastern, all humans will share both similarities and differences when it comes to their own interpretations and spiritual points of views about religion. Whether it is heaven or reincarnation, the driving force of all religions seem to point to one thing and that is the desire to know what happens to us in the after-life.

Western Religions consist of three major religious groups and they are Islam, Judaism, and Christianity. The western regions are the Americas’ and European countries. Scholars link the birth of all religious cultures to the evolutionary development dating as for back as 30,000 years ago, starting with the belief of animism, which would develop into polytheism, then into henotheism, which eventually evolved into monotheism. Western Religions are considered to be monotheistic, meaning that they believe in one higher being, or the belief in the existence of only one god that created the universe, is all-powerful, sees all, and has the power to intervene in the world. These three religions are said to have been shaped by the myth of history. They are sometimes referred to by many philosophers as “Abrahamic Religions.” They are referred by this name because of Abraham’s significance in the Old Testament being acknowledged or recognized as the patriarch of these three religions or founding father and roots to the story of God who made promises to Abraham and his descendants. Some Judaist and Islamic scholars have argued that Christianity is not a monotheistic religion because they believe Christians worship more than one God when they worship “The Son,” “The Father,” and “The Holy Spirit,” also called the trinity but in reality, these are the three bodies that makeup Christ or God. Which means that Christians only serve one God.

Of these three religions, Judaism is the oldest, but philosophers believe that Israelites use to worship more than one God before transitioning to a strictly monotheistic belief. Islam is the youngest of these three religions and did not emerge as a new religion but more as an edit to Christianity and Judaism. Islamic belief is that God’s word had been corrupted by men, so, God sent Muhammad the Quran to correct the scriptures that were considered corrupt. Islamic philosopher Al-Ghazali made a great argument as to monotheism, stating that there can only be one omnipotent being. His reasoning was because, if there were two omnipotent beings, the first would either have power over the second (meaning the second is not omnipotent) or not (meaning the first is not omnipotent); thus implying that there could only be one omnipotent being. This was perhaps the most relatable and logical explanation that I have read in relation to proving exactly what a monotheistic religion is. They all refer to their God or deity by different names, the Jewish name is YHWH, Muslims say Allah, and Christians refer to their deity as God. Jews wear the religious symbol the Star of David, Muslims wear the Crescent Moon & Star and although there are several Christian symbols, the Cross is the most universal symbol of faith.

Eastern Religions consist of several different groups, Hinduism, Buddhism, Confucianism, Daoism, and Shinto are a few of the religions with rich history in this region. Unlike Western Religions being monotheistic, Eastern Religions are polytheistic, meaning the worship of or belief in multiple deities, which are usually assembled into a pantheon of gods and goddesses, along with their own religions and rituals. Eastern religious practices tend to emphasize more on the perceptions of a being, the entirety of human senses, self-experiences and personal demands, instead of being concerned with the divine and divinity. Hinduism is the third largest religion in the world and although its origins are South Asia, it is spreading to countries around the world. Most Hindus base their religious lives around the reality of karma, to which asserts that all actions performed by an individual set into motion a cause that will lead to a moral effect in the present and/or future lifetimes (Page 272).

Hinduism is also referred to as the response to Buddhism. Born a prince, the son of a warrior, whose name means “the one who attains the goal,” Siddhartha, the man who would eventually become a religion. He would later begin to refer to himself as Buddha. Under his Dharma or doctrine, Buddhists believe that they are capable of achieving their ultimate goal and that is a state of enlightenment or nirvana/rebirth. Buddhism initially was not considered a religion across India, it wouldn’t become a religion until emperor Ashoka begin to encourage Buddhism as a broad-based religious tradition. Confucianism is an ethical and philosophical system developed from what was called the Hundred Schools of Thought, which were based off the teachings of the Chinese philosopher Confucius. Confucianism originated as an ‘ethical-sociopolitical teaching’ during the Spring and Autumn Period, but later developed metaphysical and cosmological elements in the Han Dynasty. One of Confucius’ main goals was to create harmonious group relations in order to create a more stable society.

Daoism philosophical system developed by Lao-tzu and Chuang-tzu advocating a simple honest life and noninterference with the course of natural events. Daoists practice individualistic retreat, learning from the natural world, non-interference by the state as the best ways to ensure their humanity to flourish (Page 424). Daoism has been very influential on the Chinese culture for many centuries and scholars suggest that cosmological notions from the School of Yinyang were some of its first teachings. Shintoism is a religion that originated in Japan. Scholars around the world believe that Shinto is considered Japan’s indigenous religion. Shintoism circulates around the kami (‘Gods’ or ‘spirits’), which are supernatural entities believed to inhabit all things and is perhaps the reason philosophers also consider Shinto as also being animistic and pantheistic from a natural world perspective.

The many differences between world religions are in reality only at a superficial level but what brings them closer, in contrast, is when viewed from a spiritual level. We all know that as human beings we all have our very own thoughts, beliefs, and ideas whether it be from a Western or Eastern point of view, but we all share the same inner instinct of wanting to know the inevitable. Throughout the history of religion, colonialism has perhaps been one of the most powerful parts behind the migration and spread of religion around the world. It has been the main ingredient when speaking of diversification in both the Eastern and Western hemispheres. For centuries from premodern to modern, modern to postmodern religion has transformed several times and will continue to do so as we evolve as human beings. I believe no matter what religion one might be, no matter what part of the world one might come from, as a human being we all know the difference between right and wrong or good and bad, which from what I’ve learned throughout this course seems to be the fundamental underlying teachings of every religion that we have studied. So, no matter the similarities or differences the ending objective under all the doctrinal teachings remains the same and that is living a righteous life.

Similarities and Differences of Western and Eastern Religions. (2020, Nov 15). Retrieved from https://studymoose.com/similarities-and-differences-of-western-and-eastern-religions-essay 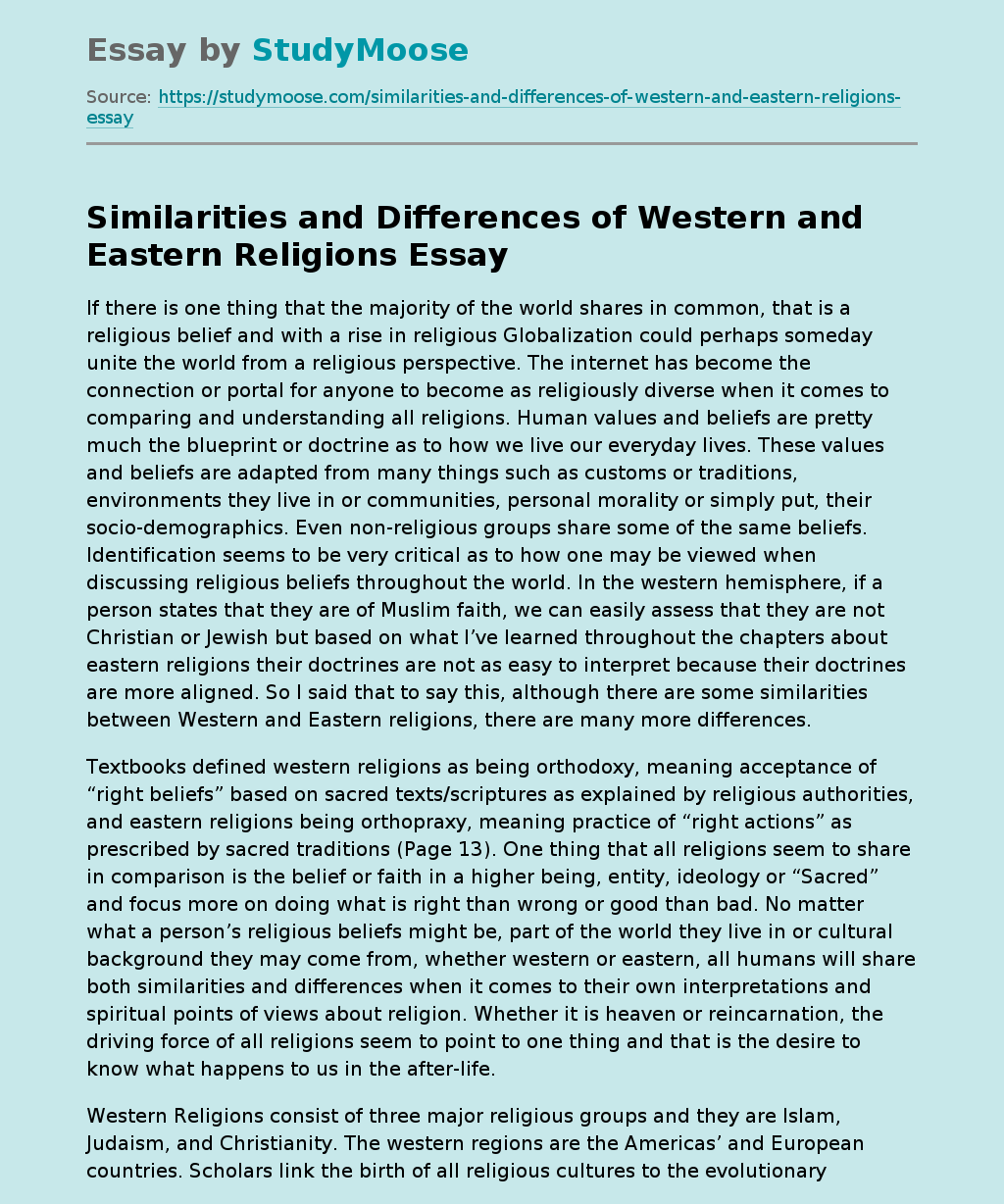