A Comparison between Eastern and Western Philosophy

Have you thought about the question—“Is the world around us knowable?” For most Westerners, the answer is positive. But if you ask a Chinese the same question, you would get the reply like: “I don’t know.” or “Does it matter?” The reason behind it is the difference between Eastern and Western philosophy. A variety of philosophy schools around the world have pondered these kinds of philosophical problems for thousands years and some of them are highly representative (like Confucianism for Eastern and Platonism for Western).

Turn in your highest-quality paper
Get a qualified writer to help you with
“ A Comparison between Eastern and Western Philosophy ”
Get high-quality paper
NEW! AI matching with writer

Because the understanding from a single side is always partial, the purpose of this paper is to illustrate the major differences between the focus and methodology of Eastern and Western philosophy traditions and explain the possible causes behind it. When it comes to philosophy, Eastern philosophers take an individual inner world as starting point and put the principles of social life at the first place while Westerners will speculate on it from a universal perspective and try to figure out the principles behind the world.

As Fung (1984) states that from a philosophical perspective, the highest achievement a man could realize is to be a sage and the daily task of dealing with social affairs in human relations is a part of the process of being a sage. However, for Western philosophers, they are inclined to put the origin of all things in the universe at first place, and then analyze how the world works. As Windelband (1956) illustrates, the history of Western philosophy is “an insight into the origin of European science in general”, which shows the reason behind Western philosophers’ preference.

This difference also appears in Eastern and Western philosophy’s attitudes toward politics. In the ancient period, both Eastern and Western philosophers played the role of policy maker. Dong Zhongshu, who is one of the most successful Confucian in political area in Chinese history (as his theories had been taken as the general embodiment of the policy of running the country), put forward the “Three cardinal guides (ruler guides subject, father guides son and husband guides wife)” and “Five constant virtues (benevolence righteousness, propriety, wisdom and fidelity)” to help emperor Wu to strengthen his domination (Queen, 1996). All of these principles are highly related to social life since Dong believes the core of philosophy is humanity and the society needs to be ordered by regulating people’s social life. Similarly, Plato, who is a representative figure of ancient Greek philosophy, also offered his political opinions, which is highly related to his theory of forms. As for Plato, the structure of a state is similar to a human body. The workers represent the abdomen; the warriors represent the chest and the philosopher kings represent the head, which are corresponding to productive, protective and governing respectively (Gaarder, 1996).

As Easterners do not have a system of principles and methods to solve problems, they take the principles of social life as methodology, which can be summarized as doctrine of the mean. In contras, Western philosophy has a set of theories of reasoning (like syllogism and deductive reasoning), which can form people’s decisive mind habit. As Hamilton and Webster (2009) states in their book about culture difference “Difference in approach can also be seen in negotiations.иWesterners expect to focus on contentious issues and try to achieve the most beneficial outcomes for themselves. In contrast, the Japanese prefer to discuss areas of agreement, with the expectation that harmony will lead to the resolution of details.” In other words, as a result of putting high value on social relationship, the methodology of Eastern philosophy comes from predecessors’ experiences and people chronically take other’s feeling into consideration, whereas Westerners usually take themselves as starting points, advocate independent and rational thoughts as well. For another instance, both Eastern and Western world had experienced a lot of reforms, but the leader of the reform would take totally different approaches.

During the period of hundred day’s reform, which happened in China in 1898, Kang YouWei, who is the leader of this reform, spread his ideas of reform by annotating Confucius classics (Karl and Zarrow, 2002). Likewise, there is also a famous reform that happened in France in 1800s—the Age of enlightenment. The leaders of this reform set up their own theories of society and pointed their arrows toward feudal class directly (Dora, 1979), which is extremely different from Kang’s approach. One of the greatest reasons for the difference between Eastern and Western philosophy is geography. As Windelband (1956) notes, the history of the philosophy of the Greeks, like the history of their political development, requires a larger conception of its political relations would imply. This shows that geography plays a significantly important role in the development of philosophy. Generally speaking, the two main sources of Eastern philosophy—China and India—are agriculture countries. “There are two expressions in the Chinese language which can both be translated as the world. One is ‘all beneath the sky’ and the other is ‘all within the four seas’.” (Fung, 1948).

As agriculture activities are regular and predicable, Easterners prefer to believe past experience rather than abstract principles. That’s why the sayings and behaviors of a sage can be the best philosophy lesson for Easterners—because they are specific and comprehendible. And yet, Western countries are very close to ocean. As Windelband (1956) cites homer “The natural link of the three great continents was this sea, with its islands and coasts occupied by the most gifted of people, which from the earliest historical times had settled all its coasts.” As a result, most Western countries are highly commercialized and industrialized. Innovation and breakthrough are always greatly required, which means only the theories based on logic and reasoning can be valued. As Confucius once said, “The wise move; the good stay still. The wise are happy; the good endure” (Confucius and James, 2010). Though it is not his original meaning, this saying shows the difference between the personality of the ancient Chinese and Greeks from a geographical perspective.

Let’s move back to the question at the beginning—“Is the world around us knowable?” The different answers toward it imply the real reasons behind the differences between Eastern and Western philosophy and that is the ways they look the world. While Easterners pay attention to the balance of the inner world, Westerners are trying to conquer the outside world. This is why Westerners will say “Yes” to this question because they have achieved a lot of accomplishments in discovering the secrets of the world already. But for most Easterners they pay more attention to their daily life and relationships with others, which make them cannot respond to this question with a certain answer. Both the differences of emphasis and methodology can be explained from this perspective. To a great extent, geographical factors contributed enormously to this process and sometimes make the gap grow. Eastern and Western philosophy need to learn from each other, as it is the only way to recognize the advantages and disadvantages of themselves. We all have a belief that he different philosophy will melt with each other rather than against in the future.

A Comparison between Eastern and Western Philosophy. (2016, May 20). Retrieved from https://studymoose.com/a-comparison-between-eastern-and-western-philosophy-essay 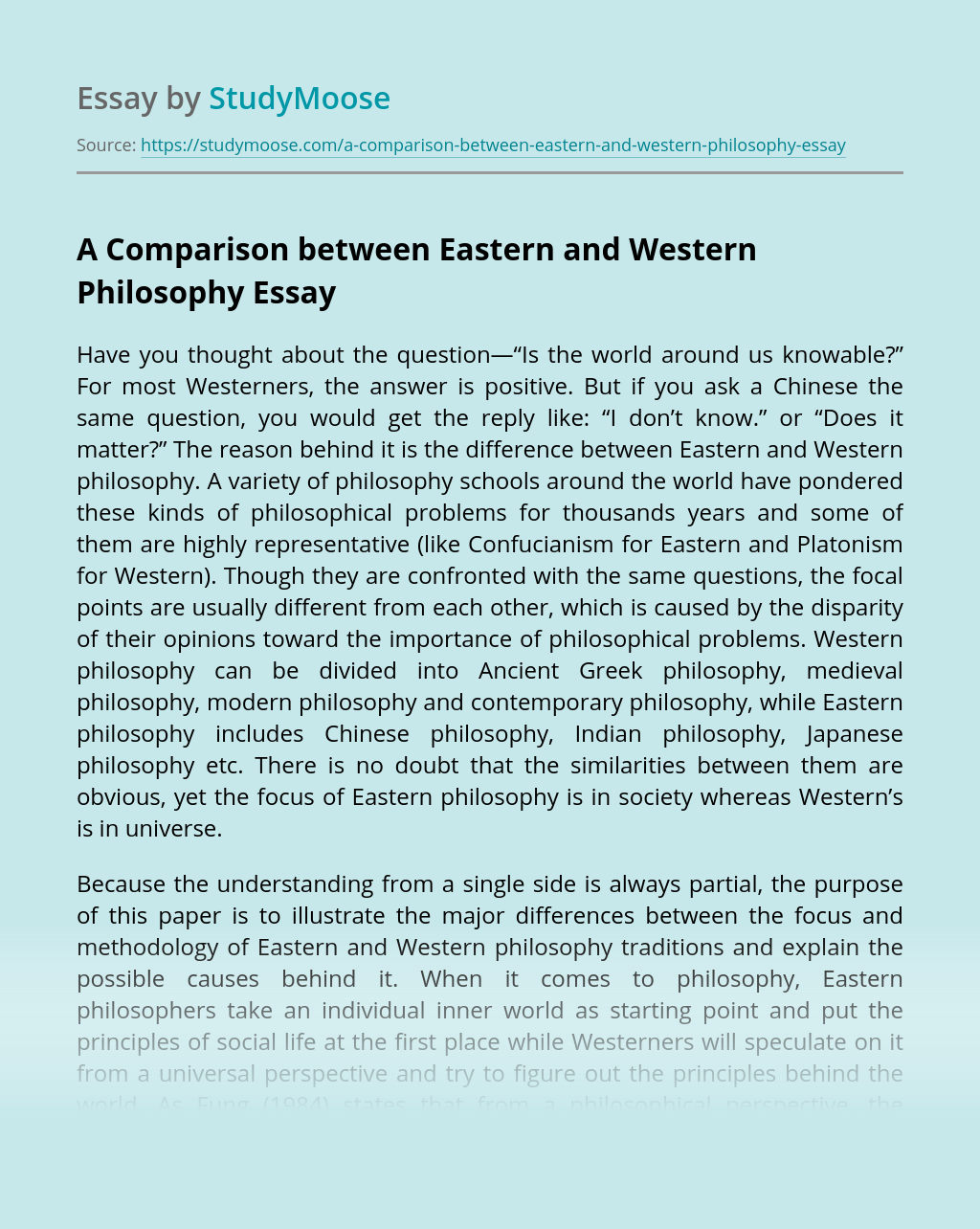 Turn in your highest-quality paper
Get a qualified writer to help you with
“ A Comparison between Eastern and Western Philosophy ”
Get high-quality paper
Helping students since 2015
Stay Safe, Stay Original