A Reflection On Hinduism Philosophy As An Eastern Religion

Turn in your highest-quality paper
Get a qualified writer to help you with
“ A Reflection On Hinduism Philosophy As An Eastern Religion ”
Get high-quality paper
NEW! AI matching with writer

There is however a distinct difference between these two religions from a historical, cultural and theological perspective. Another distinct difference between these two religions is that while western religion is distinctly monotheistic, the Eastern religion is a polytheistic religion. This paper reflects on some appealing facts about Hinduism in particular. Being the third largest religion in the world after Christianity and Islam, it has some very appealing and sometimes surprising philosophies . Hinduism religion does not have a single founder.

Its year of origin cannot be distinctly pointed out.

As a matter of fact many theological scholars still wonder even today whether Hinduism is a religion, a culture or it is a way of life. Therefore they have come to a conclusion that Hinduism is the three of the above. While the western religions may have a boundary between what they consider sacred and non sacred, this does not apply in Hinduism. In fact many of Holy texts in Hindu and the religious practices in Hinduism insist on enhancing ones quality of life while on earth unlike the western religion which focuses on liberating people from evil and from the cycle of death and promising them heaven.

Therefore, Hinduism consists of other aspects that are considered religious like dancing, healing of the sick, architecture, tree-planting, building homes, singing, sculpturing and astrology. From a western religion point of view, this may seem surprising or appealing . Unlike Christianity and Islam whose history is marked by remarkable personalities for instance Jesus and Mohammed respectively, Hinduism does not revere such personalities despite there being many of them.

Instead, the history of Hinduism is marked by orally transmitted texts that are entertaining, edifying and sophisticated philosophically. These texts were passed from one generation to the next through performing arts. What contributed to the spread of Hinduism religion was its appeal to both the low class and the high class, the use of vernacular language from its inception and an increasing culture of temple building. The later is said to be the greatest contributor for the spread and popularity of Hinduism across all social classes.

In fact the temples, unlike the churches and mosques whose main use is worship and worship alone, the temples were used as centers of music, singing, dancing, poetry, rituals, economic distribution, and scholarship in addition to being centers of devotion. In addition the temples were also centers of astronomy and art and they also acted as prestige markers for patrons . Hinduism has some appealing beliefs that their followers can transcend their lives through meditation and yoga and in doing this unite with some greater power.

Hinduism is therefore based on many forms of self-effort and devotional poetry as a form of worship. Some of these forms of self effort include yoga, knowledge and meditation. What is also surprising is the fact that Hinduism does not have a distinct deity that is worshipped. As a matter of fact, their temples have many deities as well as in their domestic altars. The Hindu texts also do not clearly have a stand on the divine concerning the supreme deity. This is because some Hindu texts claim that there is a supreme being who they refer to as overwhelming, indefinable and beyond form, gender and name.

But in contrast some texts also describe the Supreme Being as the primordial mother or as the perfect man. Some texts also perceive the Supreme Being to be a half man, half woman or as a family of deities. But in all those there is a generally agreement between the Hinduism followers that the supreme being can manifest in different forms and shapes with some of these being as a human, tree, animal or in combination of these three forms. In short the belief is that the Supreme Being is beyond thought and He or She appears on earth periodically with an aim of protecting the good and destroying the evil.

The way that the Hindus acknowledge the deities is also surprising. Unlike the Christians who have a common belief that God is the Father and Jesus is the son, the Hindus may consider all the deities equal but when it comes to worship, they will worship the one which is their most favorite. Surprising? But some scholars after critically analyzing the Hindu texts have come to a conclusion that there are three hundred and thirty million deities but only one god.

The deities, they conclude are the powers of this one god a thing considered appealing and ambiguous. It therefore stands that Hinduism does not have a clear cut direction when it comes to Supreme Being and deities. The Hindu texts therefore have not given a clear cut direction of worship. Therefore, Hinduism does not have a particular Holy book unlike the Bible, which is used by the Christians and the Quran, the Holy book of Islam. That is why the worship in Hinduism basically lies in self effort.

That is where practices like astrology, yoga, meditation, and reincarnation form part of Hinduism philosophy . The concept of reincarnation is one of the most appealing philosophies of Hinduism. The belief is that a soul reincarnates many times after one dies up to and until that time when it becomes perfect and free from sins. It is after this that the soul can now unite with its Maker or its Source. In the process of reincarnation, the soul passes through many human bodies, takes many different forms and undergoes many births and deaths.

Therefore each and every soul has to live many lives and pass through many experiences in order to attain perfection. It is only after attainment of perfection that the soul can become one with the Divine. After death, the body dies but the soul survives. According to the deeds that one was performing on earth and depending on the number of bodies that, the particular soul has passed through then the soul either joins the divine or it returns to the earth to take another form through birth.

This process goes on until the soul has fully exhausted the fruits of its bad deeds . Conclusion From the discussion above, it is evident that though the Eastern and Western religions may share some basic commonalities, there exist some pretty stark differences. Having chosen Hinduism as one of the Eastern, it is evident that it is an appealing religion in one way and at the same time surprising in other ways. Bibliography Coogan, Michael. Eastern religions: Origins, Beliefs, Practices, Holy texts, and sacred places. New York: Oxford University Press, 2005.

A Reflection On Hinduism Philosophy As An Eastern Religion. (2016, Sep 13). Retrieved from https://studymoose.com/a-reflection-on-hinduism-philosophy-as-an-eastern-religion-essay 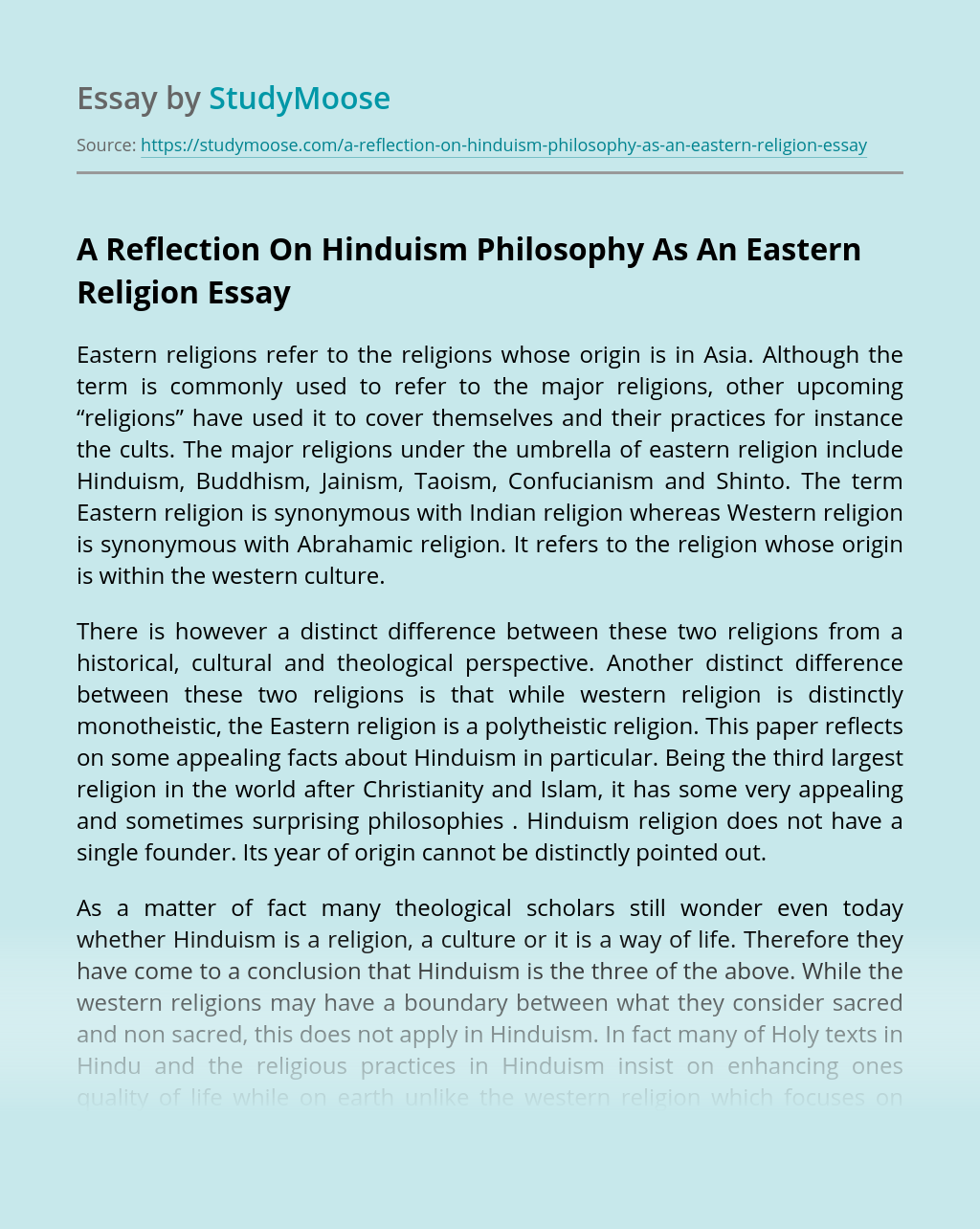 Turn in your highest-quality paper
Get a qualified writer to help you with
“ A Reflection On Hinduism Philosophy As An Eastern Religion ”
Get high-quality paper
Helping students since 2015
Stay Safe, Stay Original