Sacred Reality in Hinduism and Buddhism

In regards to the definition of religion given in The Sacred Quest, we find that due to the complexity of the term religion there are many different ways to satisfy what it actually is. It can be recognized that sacred reality indicates the characteristics of being specially distinctive; beyond human control; concerned with human welfare; and determinative of aspects of human existence. In a world of diverse religious traditions, we are offered distinct perceptions of sacred reality. For example Judaism, Christianity, and Islam are usually categorized as religions of transcendence, defining sacred reality as being beyond or “standing over” ordinary existence.

Don't use plagiarized sources. Get your custom essay on
“ Sacred Reality in Hinduism and Buddhism ”
Get custom paper
NEW! smart matching with writer

Meanwhile, Hinduism and Buddhism are considered religions of immanence, meaning they do not portray sacred reality with an all-powerful God who is eternal and surpassing of human understanding. In these religions of immanence it is important to realize that the sacred is everywhere, including within, and meant to be a way of seeing reality more clearly rather than attempting to reach something that is above and beyond.

The sacred reality found in Hinduism is the Brahman. Brahman is described as universal consciousness; it is truth, knowledge, and infinity. In Hinduism everything has its own spark of Brahman, Atman, which is never actually separate from the Brahman. Ultimately all Hindus intend to achieve moksha, or liberation, the realization of the unity between Brahman and Atman. By realizing this unity the Atman becomes aware of maya, the illusion of separation, and the cycle of death and rebirth known as samsara is ended.

Buddhism’s approach of sacred reality is very similar to that of Hinduism, this is due to the fact Buddhism was formed in response to Hinduism. The sacred reality of Buddhism is known as Nirvana. In Buddhism the Four Noble Truths provide the basis that life is suffering (dukkah); suffering is caused by attachment (tanha); suffering can cease by the attainment of Nirvana; and the development of insight may be attained by following the Eight Fold Path, the principle teachings of Buddha. Rather than being a place, Nirvana is a state of mind that must be attained during life and cannot be fully understood by one who has yet to attain it. Literally meaning to extinguish, once Nirvana is attained there is a complete end to suffering, or dukkah.

The illusion of samsara, the cycle of rebirth, is realized by achieving Nirvana. The notion of sacred reality found in the religions of Hinduism and Buddhism differ from those of the western religions. Each religion’s relationship with the sacred differs in the way the functions of the religion are approached. According to The Sacred Quest, religion is meant function to produce long lasting feelings, thinking, and acting within its believers as well as to function with respect to problems of ordering and understanding existence. In respect to these functions each religion has its own approach. The western religions of Christianity, Judaism, and Islam share similar major core concepts that they all believe in the same single and all-powerful God, but within each religion the relationship with God is different.

Those who participate in western religions are expected to lead lives devoted to God, in hopes of someday reaching the beyond in the after-life. Meanwhile, Hinduism and Buddhism similarly practice the belief in many gods and goddesses. They both believe in reincarnation, the cycle of rebirth after death until either enlightenment or Nirvana is attained. Rather than striving for a sacred place that is beyond, eastern religions must attain the sacred during their life. The film The Long Search: Buddhism: Footprint of the Buddha-India revealed that there was less praying to individual gods and goddesses in Buddhism. Buddhism, a religion that intends to attain enlightenment and Nirvana, is also considered as a way of life; this is best expressed through the life of a Buddhist monk.

In Buddhism, especially Theravada, those who become monks face more strict requirements than laypeople in order to be on a seemingly quicker path to attaining Nirvana, while preaching the principles of Buddha. In western religions such as Christianity and Judaism those who become priests, monks, or rabbis are not simply more likely to be accepted into Heaven. Though many may lead a life more devoted to God, their primary purpose as a religious figure is to spread God’s word. The religious journey in Hinduism and Buddhism is more of a personal one, in which following the exact path of enlightenment of those before you will not in turn help you attain your own personal enlightenment.

As stated religion produces certain ways of acting, this is especially exemplified in the eastern religions of Hinduism and Buddhism. In Buddhism leading a life according to the Eight Fold Path is important to achieving Nirvana. The Eight Fold Path calls for Buddhists to have the right understanding, motives, speech, action, livelihood, effort, mindfulness, and meditation. This results in days dedicated to meditating, clearing the mind, and being aware of the sacred around you. In Hinduism enlightenment is best achieved by worshiping the many gods, or puja. Hindus use much of their time to dedicate altars and make sacrifices to the gods and goddesses, this is done in order to see and be seen by the divine. This is how the “notion of the sacred” comes into play. Each religion has something sacred that they believe in; though the sacred may be similar, the way in which the different religions approach the sacred affects their beliefs and way of life.

Sacred Reality in Hinduism and Buddhism. (2016, Dec 26). Retrieved from https://studymoose.com/sacred-reality-in-hinduism-and-buddhism-essay 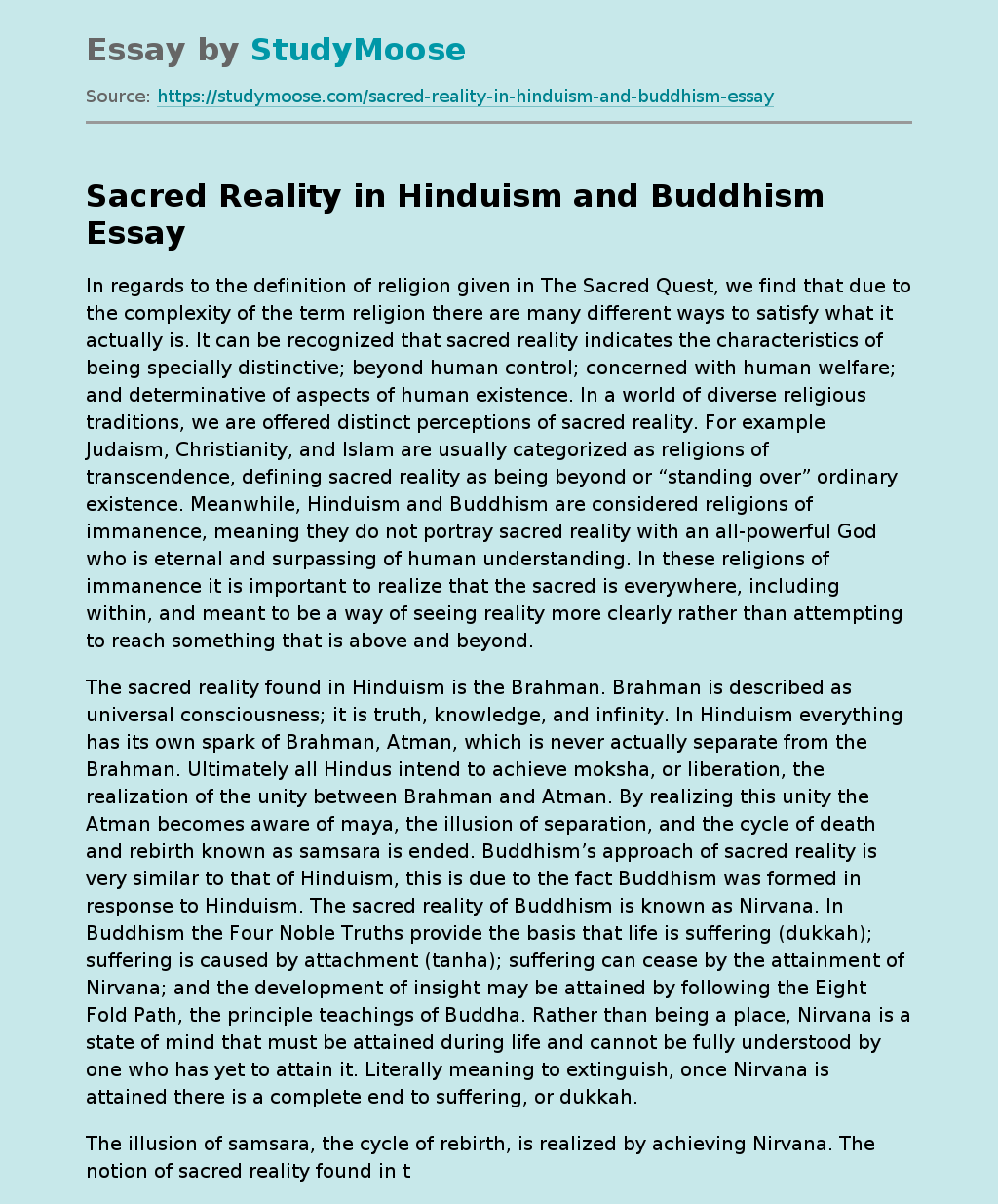