Janakpur, the birthplace of Janaki or Sita, the consort of Lord Ram, is an important religious pilgrimage site in the Terai plains, in south central Nepal. In ancient times, Janakpur was the capital city of the Kingdom of Mithila and the centre of Maithil culture during the Treta Yug, or period, nearly 12,000 years ago.

Janakpur has held a special significance for Thai Royal families since ancient times. The Royal household of Thailand still receives mangoes from the orchards of Janakpur. These fruits which are in abundance only during the peak summer months from May to mid June are savored for their sweet taste and unique flavor.

Turn in your highest-quality paper
Get a qualified writer to help you with
“ Janakpur Nepal ”
Get high-quality paper
NEW! AI matching with writer

JANAKI MANDIR: Pilgrims flock here by the thousands to pay homage at the massive and magnificent Janaki Mandir – Janaki being the other name of Sita, the daughter of King Janak. The temple was constructed in 1874 and is a blend of Mughal and local architecture. The temple is a three-storey building and has 60 rooms, making it the largest temple in Nepal.

The temple houses an idol of Sita which was found near Ayodhya, the kingdom of Ram. The marriage anniversary of Lord Rama and Sita is celebrated in Janakpur every year on Vivah Panchami day which falls in December.

In the southwest corner of Janaki Mandir is the Vivah Mandap, which has been built at the site where the marriage of Ram and Sita is said to have been taken place. Another well-known temple in the vicinity is Ram Mandir, built in pagoda style, and hence is different from the other temples in Janakpur which generally bear resemblance to Mughal architecture.

It houses a female statue, said to be of Yogamaya, which has the reputation of being one of the most beautiful images of female forms in Nepal. Other holy sites of interest include the Laxman Temple, Sankat Mochan Temple and Hanuman Temple. 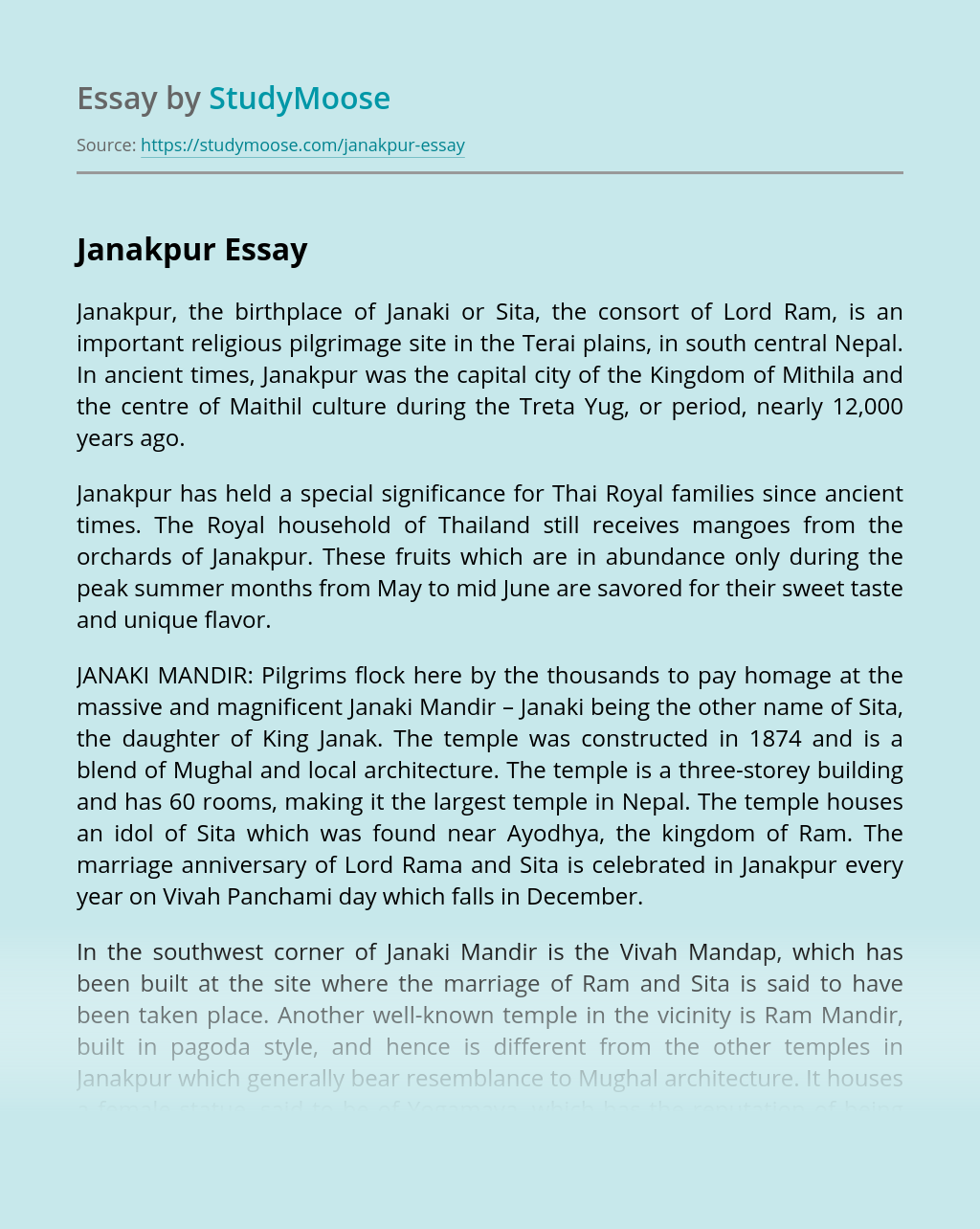 Turn in your highest-quality paper
Get a qualified writer to help you with
“ Janakpur Nepal ”
Get high-quality paper
Helping students since 2015
Stay Safe, Stay Original