Was Louis XIV A Good Or Bad Monarch

Louis XIV, also known as Le Gran Monarque and the Sun God, was not indeed such a good king for France. The reign of Louis XIV was hurtful in many ways to France and its people. First of all, Louis XIV financially destroyed France by doing things that he thought would help but just hurt France in the long run. Louis was constantly at war with another country, which not only hurt France financially, because wars were very expensive during that time, but it also depleted France¡¯s once massive army.

Don't use plagiarized sources. Get your custom essay on
“ Was Louis XIV A Good Or Bad Monarch ”
Get custom paper
NEW! smart matching with writer

He also persecuted the Huguenots and fifty thousand of them fled from France, many of them skilled and very well educated, which also hurt France. It seemed as if the way Louis XIV ruled France was to mainly help himself, and if he did want to make France greater, he failed to do so throughout his reign.

The things that Louis XIV did throughout his reign over France used up much of France¡¯s wealth.

The thing he did that hurt the most was building his palace and capitol at Versailles. This palace spanned across a third of a mile with hundreds of fountains and other great and expensive things were built in this palace. This took enormous amounts of money to build. His whole plan to keep the high nobility in one place and neutralize their political power with endless ceremonies and having them live a court life succeeded but was not worth all the money and time he had put into it.

The money he used could have been put to better use to help the country, not only on himself and the high nobles. Also, during a time of famine, crop failure, and bitter cold, Louis raised the taxes immensely to stave off bankruptcy but brought about greater misery on the common people of France.

Louis XIV used much of the country¡¯s money and its huge military on wars that were many times unnecessary. He was too overconfident and believed that he could regain France¡¯s ¡°natural frontiers¡± along the Rhine and the Alps. He wanted to remake the huge multinational empire that Charlemagne once ruled. He wanted France to be the influence in all the countries of Europe. In the first two wars, it looked as if he was actually going to be able to accomplish this feat. France¡¯s power and prestige was at its peak, having a great influence in many places, especially to the German princes who tried to copy the standards of Versailles. Louis had built up a magnificent army and it seemed as if there could be no other army who could beat the French. But when alliances were made, things turned around for Louis and the French.

The next two battles were hard on the French. These alliances and leagues were harder for France to beat and the French army was affected badly. At the end of his third battle, there was an agreement to hold to the status quo and nothing changed for France. His final war was the Spanish Succession. He was trying to be king of Spain since the king of Spain had died with no heir left behind. And so the French once again fought with another team of alliances and soon.

Louis XIV attacked the rights of the French Protestants, or the Huguenots. He neglected the Edict of Nantes, which gave rights to the Protestants, some of these rights were full liberty of private worship, liberty of public worship wherever it had previously been granted and its extension to numerous other localities and to estates of Protestant nobles were given full civil rights including the right to hold public office. All the persecution of the Protestants by Louis caused approximately fifty thousand Huguenot families to leave France. Among these people there were many industrious and skilled workers, sailors, soldiers, officers, and other useful citizens were the backbone to Frances economic and social success as in any other country. And other countries welcomed all those who fled since they would help the economy of that country instead of France. Of course there were still other workers and soldiers in France, both Huguenots who put up with the persecution and Catholics, but a great percentage of the number of workers in France left for another country and hurt the French badly.

Louis XIV most likely wanted to help France as much as he could but it seems as though he hurt it more, as he thought he was helping France. He economically destroyed France, using money carelessly and ending up with a huge debt that Louis XV had to deal with, especially with the construction of Versailles. Secondly, he tried to help France by extending its borders and making France the most influential country in Europe but the cost of French lives and the finance put into these wars were not worth the little extension he was able to make. And the harsh persecution of the Huguenots led to less workers in France and more in other countries since the majority of them fled to different countries along with their skills. Over all, the one known as Le Gran Monarque and the Sun King was actually a king who weakened France and left it for his successors to take care of the problems and debts that formed over time as he ruled France.

Was Louis XIV A Good Or Bad Monarch. (2016, Jul 13). Retrieved from https://studymoose.com/was-louis-xiv-a-good-or-bad-monarch-essay 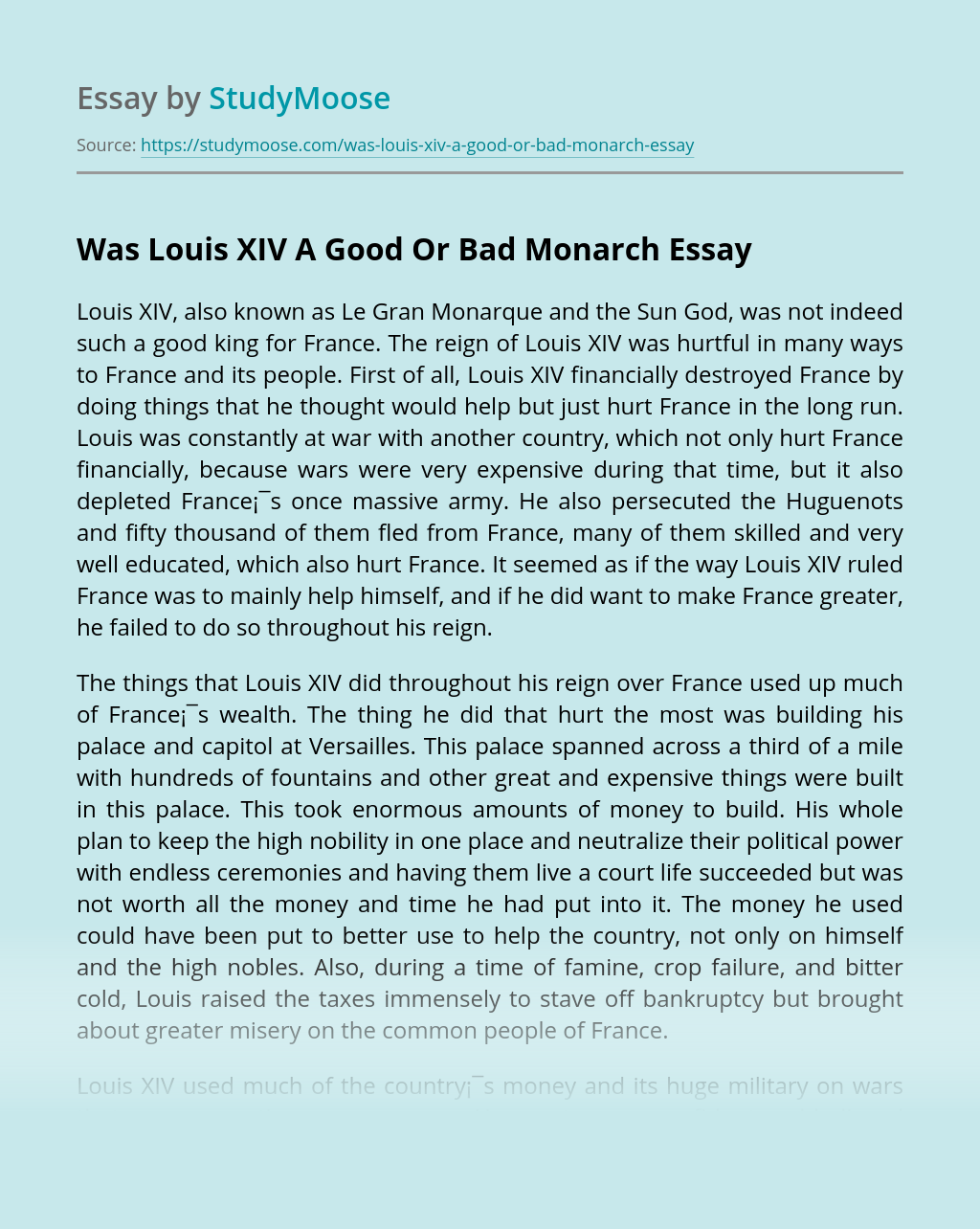