1. What led the LEGO group to the edge of bankruptcy by 2004? Please focus on the management moves during “the growth period that wasn’t” (1993-98) and “the fix that wasn’t” (1999-2004). 2. Why did Knudstorp’s turnaround strategy work? In your opinion, which actions were the most effective? Which actions were the least effective? Be specific. 3. Should LEGO launch the new line of board games?

The early 1990s bought about a seismic shift in the toy market.

Turn in your highest-quality paper
Get a qualified writer to help you with
“ Lego Case Study ”
Get high-quality paper
NEW! AI matching with writer

Big Box toy discounters lowered prices dramatically and it affected LEGO in a big way. Birth rates declined too, children had less time to play and not much interest in toys that didn’t offer instant gratification. These external and market changes did not play well to LEGO’s strengths. Along with the external factors, serious changes were also happening in the LEGO Group. Then CEO, Kjeld appointed a five-person management team to help him run the company when he returned.

The group focused mainly on driving growth. When a benchmarking study revealed LEGO’s global name recognition was on par with industry giants like Disney, the team started churning out new products and ideas to leverage the brand’s untapped value.

A line of LEGO-branded children’s wear was created and a division of the LEGO Group was charged with pitching book, movie, and TV ideas. LEGO building sets became increasingly complex with more unique components. While the number of LEGO-branded items grew, sales did not, and the company suffered its first financial loss.

The top-line growth was slowing down but their cost was accelerating, so they were starting to lose some significant money. There were many reasons for it

Firstly, I believe the issue was Plougmann’s management style. He started doing things by the book. All the initiatives like laying people off, streamlining things, globalization was like going by the turnaround book and yet the financial picture grew worse

Secondly, the company’s growing complexity was choking it and was a big cause of concern. Adding more bricks made products harder to assemble, forecasts harder to determine, and inventory harder to manage. The complexity had a multiplier effect that went through the entire supply chain

Thirdly, the LEGO Group had also gotten too far away from the core values it had been building on for the better part of a century.

Jorgen Knudstorp was just 35 years old when Kjeld promoted him from director of strategic development to CEO in 2004. Unlike Plougmann, his turnaround attempt succeeded.

Knudstorp’s slow-it-down approach of careful cash management, focusing on core products, and reducing product complexity certainly contributed to that success. Re-engaging with customers was also taken to another level. One of the insights Jorgen had when he became CEO was that he needed to reconnect with the community of loyal LEGO fans which according to him was one of the most powerful assets the company had. It was one of the big reasons for the comeback.(Most effective)

Knudstorp recognized that innovation was part of that core, but he’d also seen the result of unconstrained creativity, so new product design began to be informed by market research, user feedback, and how well the toys matched the vision of quality creative play laid out by its founding fathers. (Less effective)

Reining in the creative process was part of a larger push by Knudstorp to reduce overall complexity within the organization. On the supply chain side, he did away with many of the unique brick components added during Plougmann’s tenure, and eventually decided to bring brick manufacturing back in-house to ensure quality control. (Less Effective)

Finally, Knudstorp made big changes to the management team, firing five of seven manufacturing executives and appointing a new leader for the team. Eg: A psychoanalyst was brought in to teach the management team how to identify decision-making made by logic versus emotion. (Most effective)

Exhibit 3,4,5,7 give a good idea about this. Going through them, I believe LEGO should introduce the board games.

Firstly, this will help them expand to different customer segments –like mothers, families etc

Secondly, exhibit 3 shows that games and puzzles are a popular category (more than building games).

A board game also satisfies more of the characteristics from Exhibit 4. 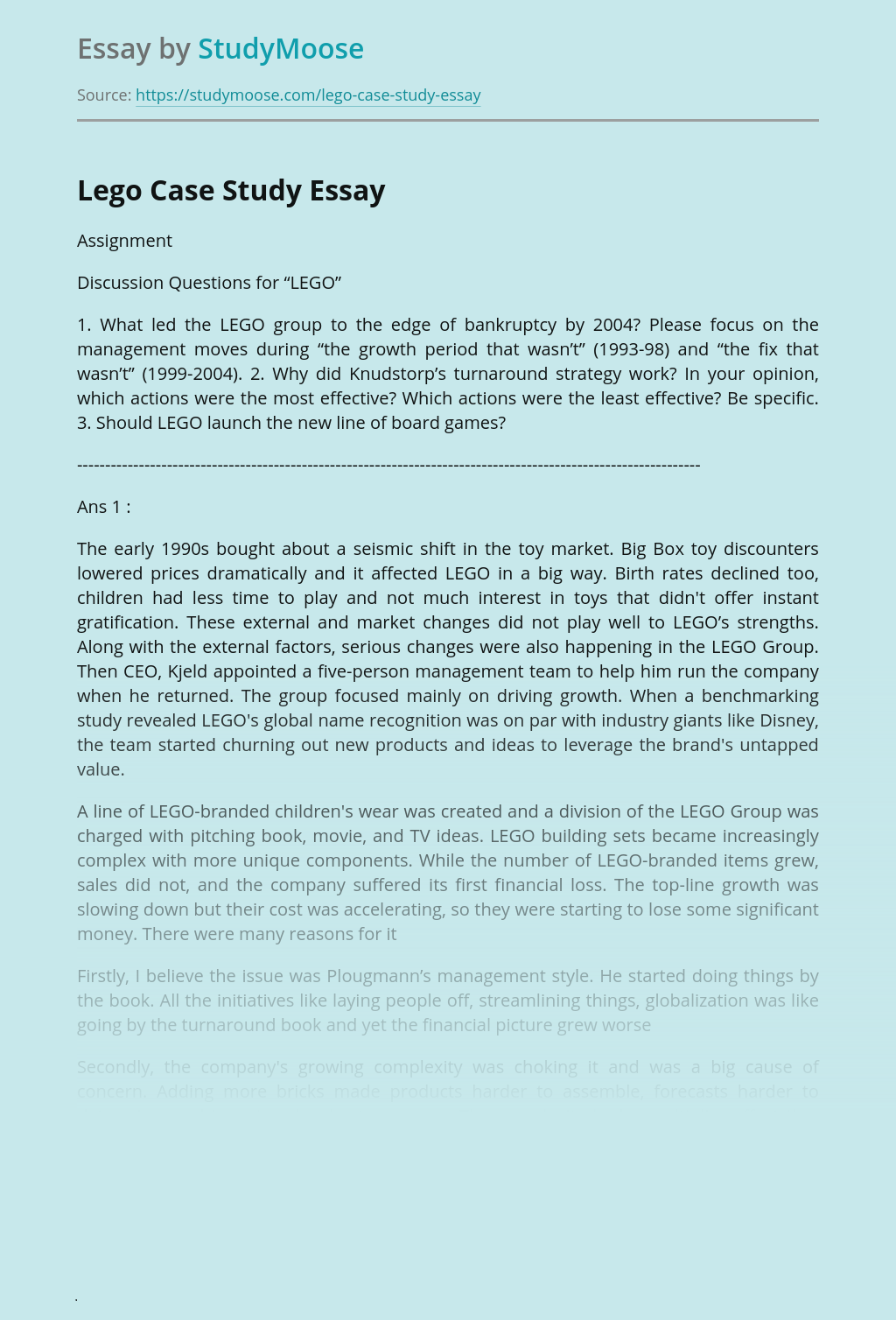 Turn in your highest-quality paper
Get a qualified writer to help you with
“ Lego Case Study ”
Get high-quality paper
Helping students since 2015
Stay Safe, Stay Original