Assess the Strengths and Weaknesses of the Reign of Tiberius

Although the early years of the reign of Tiberius were considered to be successful and prosperous, it is noted that they were not without negative aspects. The role of Princeps was a large task, like “holding a wolf by the ears” (Suetonius), especially succeeding the successful reign of the well liked Augustus, and a reliable leader was essential in order to sustain stability. This involved stepping up to a role where the protection of the country was put first and a real leader was required to run all aspects of the kingdom.

Don't use plagiarized sources. Get your custom essay on
“ Assess the Strengths and Weaknesses of the Reign of Tiberius ”
Get custom paper
NEW! smart matching with writer

However, there is controversy as to whether Tiberius really stepped up to the role as efficiently as others.

He was definitely a man of tradition, but was not well liked by the population. Tiberius’ reign held both strengths and weaknesses which created a debate as to whether he was a successful ruler or not. Despite his poor judgement of individuals, Tiberius had many positive qualities. He stuck to tradition and liked those who spoke up, a quality he possibly wished to possess.

He was an efficient administrator, protecting each province and ensured that ‘old impositions were not aggravated through official acquisitiveness or brutality. ’ (Tacitus, Annals, p. 00)

One of the first problems Tiberius encountered was the issues among the soldiers at Pannonia and Germania by Augustus involving pay, length of service and conditions. He assigned both his biological and adopted sons, Drusus and Germanicus, to each region aiming to steady the rebellious Legions. There the sons were able to solve the military problems.

It was only through Tiberius that “Germanicus had restored Roman prestige and thereby strengthened the Rhine frontier. ” (Scullard) This, along with many other issues, exemplified his skills as a military leader and his ability to find a solution to problems promptly.

As step son and predecessor of Augustus, Tiberius wanted to appear like Augustus, humble and wise, by refusing the title of Princeps. “Compelled to honour the precedents set by Augustus everywhere, Tiberius was hampered in thought and deed by his own past…” (Syme, Tacitus, p. 428) He was always known for being a secretive introvert, but after he was reluctant in becoming Princeps, he was seen to possess even more mystery as it was unclear as to why did not accept the title of Princeps straight away.

He claimed he wasn’t old enough to rule the empire and would not carry the title of Pater Patriae, and possibly even wanted to appear as though he was granted the position by the state and, as Tacitus states, not to have “wormed his way in by an old man’s adoption. ” However, he was only seen to be ungrateful and hypocritical, placing him in a negative light. This shaky start to his reign formed part of his unpopularity. A common way of describing Tiberius among historians, including Tacitus, was vindictive with a poor sense of judgement.

He was a man who kept his thoughts and feelings to himself, a trait possibly continued on from the time of Augustus’ reign, and was not an expert in figuring out the truth behind someone. He did not hesitate in befriending the deceitful Sejanus. Sejanus “an able administrator, he quickly won the approval and the personal friendship of Tiberius,” (Scullard) for many years but it was only after Tiberius discovered Sejanus’ plot to overthrow him as Princeps did Tiberius call him a “small-town cheater” and order his execution. His poor judgement of Sejanus could have cost him the empire and its stability.

Tiberius’ reign achieves no definite label of successful or unsuccessful due to the amounts of both strengths and weaknesses. His gloomy and miserable personality did not enhance his success as an emperor but neither did his attempts at being humble. Although he was not liked by many due to his sometimes disloyal behaviour, his strong military and administrative leadership was what got Rome through his reign. It could be argued that Tiberius was unsuitable for the role of emperor, however the era remained peaceful and steady, which in the end was what really mattered.

Assess the Strengths and Weaknesses of the Reign of Tiberius. (2016, Oct 03). Retrieved from https://studymoose.com/assess-the-strengths-and-weaknesses-of-the-reign-of-tiberius-essay 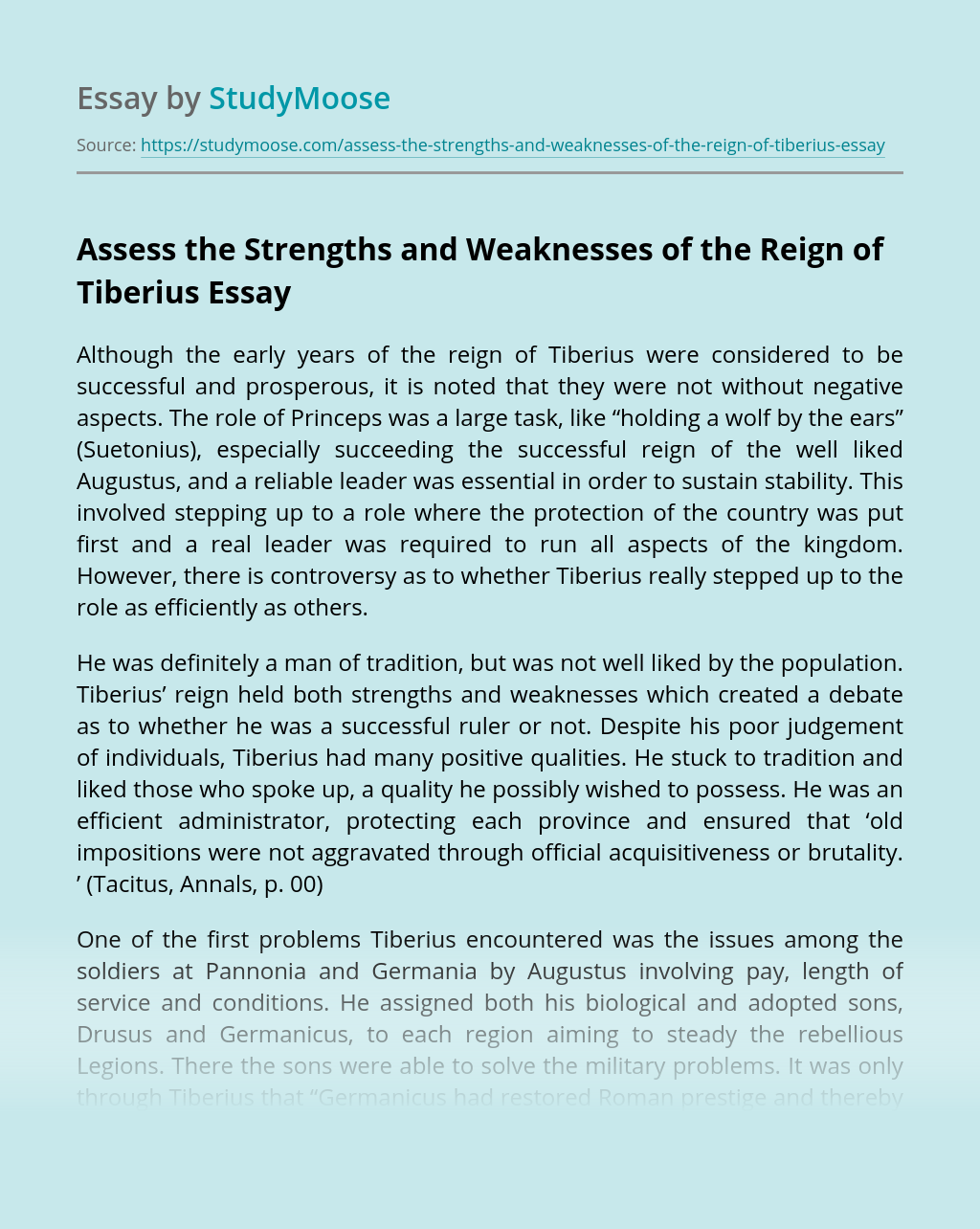