The Strengths and Weaknesses of the U.S. Constitution

Hence, in order for the American people to never go back or once again be subjected to tyrannical control which they have previously rejected and eluded, the U. S. Constitution was established, which identifies, sets, and explains the nature, extent, and implementation of the laws. Generally, the U. S.

Constitution is a subject area where law is treated as comprehensive and complicated. By principle, it adheres and responds to a lot of topics concerning the relationship of the national government to the state governments, the specific and innate rights of individuals, and other important characteristics of the implementation of the U.

S. government authority. There are other constitutional scholarly people who noted that its authors purposely wrote the Constitution in such a way that it is obscure that needs to be submitted to a deeper explanation. 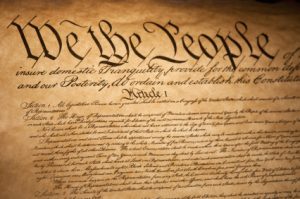 It was also created in such a way that it can accommodate the demands of the ever-changing nation. However, some assert that its provisions need to be rigorously interpreted and implemented in the most exact way. To better comprehend and appreciate the laws binding the U. S. Constitution, as well as their impacts to the nation and the people, it is essential, therefore, to analyze it in a manner wherein both their strengths and weaknesses are identified and assessed.

Through an analysis of strengths and weaknesses of the U. S. Constitution, it can pave the way for a rightful and logical amendment of provisions that are already obsolete or inapplicable to modern America, as well as the retention of those that are beneficial to and promote the nation’s development and protect a citizen’s rights. Strengths of the Constitution The Constitution of the United States brags about its many powers or strengths that boost both the welfare and development of the country and its people.

Its superior strengths include the “separation of power” clause where no one from the three branches of the government, namely the Executive, Legislative, and Judiciary, is presumed to have the lawful authority to take over the other. Thus, acquiring ultimate power is prevented (“The United States Constitution, 1787, cited in Mount, 2008). It is through this clause that the three branches are able to work their way accordingly as well as complement rather than work against each other.

This is because each of the three branches has its own specific power and function that, when applied, collectively advance the development and protection of the country and the American people. A relative strength of the United States Constitution is the provision restricting the power and authority of the said three branches through what is called the condition of “checks and balances” (“The United States Constitution, 1787 cited in Mount, 2008).

By means of this system, the streamline limitations of the Executive (President), Legislative (U. S. Senate and House of Representatives), and Judiciary (Supreme Court) are clearly defined or identified. The Constitution specifically states the boundaries of the President’s and Congress’ power. While the President is perceived to have the ultimate power in a democratic government which is manifested in his or her sole authority of veto power, Senators and Congressmen are likewise equipped with strong powers.

These include their authority to create and enact law, to engage in foreign or external relations, to declare war, to confirm or not the appointment of Presidential appointees, and to act as a special prosecutor or judge such as in impeachment cases. The Supreme Court, on the other hand, boasts of its sole power to implement laws. This set-up depicts a strength of the Constitution wherein the separate authorities of the three pillars of the government have proven to be advantageous and not detrimental to the welfare of the nation and its citizens (“The United States Constitution, 1787 cited in Mount, 2008).

In turn, the “checks and balances” clause brought about by the provision of “separation of powers” of the three branches of the government has paved the way for another strength of the Constitution. It is through the separation of powers that a significant and strong political style of the American government emerged—the sharing of sovereignty between the federal (national) and states (province) governments. The power and rights of these two governing bodies, as affirmed in the said sharing condition, are then reviewed and balanced by the Judiciary branch (“The United States Constitution, 1787 cited in Mount, 2008).

This system of self-rule or self-government was an offshoot of an earlier condition when majority of the powers of the American government lay only with the states government, leaving the federal government with almost no power or limited authority—with no means to execute such power. This defect was eventually realized. Thus, the provision of sharing of sovereignty was included with the purpose of balancing the governing arena. This has also led to a federal government that does not destroy the states government’s own authority; rather, it gave the former definite powers in order to be a real entity.

In effect, the Constitution was instrumental in unifying and strengthening more the nation with the cooperation and services being provided to the citizens by both the federal and states governments. Above all the strengths of the U. S. Constitution is its most powerful provision—the “Bill of Rights,” which particularly lists and explicitly explains the logic behind the inclusion of such provision. This is for the reason that the basic and innate rights and privileges of the Americans must always be protected and upheld.

In fact, the Americans have long been worried with violations of their rights. Hence, their “right to exercise religious beliefs, right of representation and personal decision, freedom rights,” as well as other identified privileges, are the essential grounds of several significant events in U. S. history (Mount, 2008). Aside from what was written in the Constitution, Mount (2008) added that the American history is actually full of bill of rights.

He said that there are also important rights that were identified in the Declaration of Rights which were caused by the Stamp Act, George Mason’s Virginia Declaration of Rights, and the current Patient’s Bill of Rights (Mount, 2008). Therefore, aside from being powered by its effectiveness and applicability, the U. S. Constitution is foremost strong because of its recognition and protection of the Americans’ rights. Weakness of the Constitution It is a given fact that, for every strength, there is an equivalent weakness.

Although the strengths try hard to overcome the weaknesses, it is better to address the loop-holes of the U. S. Constitution rather than hide them. In contrast to its power of promoting the rights of the people, the weakness of the Constitution manifests when political leaders are persuaded or influenced by leading business corporations in the country and even abroad. In a democratic kind of government such as the United States, it is ideal that foreign-based industries should never perform a financial function or any kind of influence in the results of the country’s elections or in the way political leaders govern the nation.

It is disturbing to note that foreign businesses are allowed to sway government officials and political candidates. This is because, in effect, they also influence the external policies being carried out by the country by leaning on their favor. Although the Congress, under Article 1, Section 8 of the Constitution, can “regulate Commerce with foreign Nations,” this clause is one example of weakness where the country is prone to go beyond dealing with external or foreign businesses (“The United States Constitution, 1787 cited in Mount, 2008).

This is because engaging in all forms of transaction with other countries tends to show that the country’s trading partner may, in one way or the other, influence the way the leaders run the government. The above weakness, when applied to the current administration, seems to be evident in the way President Bush is reportedly perceived to be in control of some powerful or influential foreign faction of capitalists. Bush critics have openly aired that these external finance magnate have strategically planned for the past years on how to get rid of the U. S. Constitution in order to establish a dictatorship through financial means.

It is now obvious how influential and affluent families have controlled the American lives through their total banking control. The administration’s critics added that every time Americans transact to these foreign banks and businesses, they are in cahoots with some federal and state agencies. Things to be Deleted and Kept If the Constitution is to be established today, there are things that need to be changed and kept in order for it to be more flexible and relevant, if not to be free of flaws. Solid amendments should be done on provisions relating to external relations and foreign borrowing of the country.

By doing so, the financial burden brought about by the powerful foreign money is removed from the citizens. Instead of the Article 1 Section 8 provision that states “Congress can borrow money on the credit of the United States,” the country must instead cut down borrowing from external interests (“The United States Constitution, 1787 cited in Mount, 2008). The Americans and the whole nation and will continue to a have hard time in absolutely showing their financial or economic potentials if they are run by foreign-based policies and investors.

Continued borrowing only maintains exploitation of the country’s leaders and officials by the foreign corporations. Thus, this is not correcting the Constitution’s weaknesses. Meanwhile, the promotion and upholding of the rights of the people should indeed be retained. This does not an elaborate explanation and basis because a democratic country is ruled by the people whose innate privileges should never be violated. Furthermore, all the other provisions of the Constitution which encourage freedom, equality, and improvement of the quality of American lives should always be in the nation’s priority.

The Strengths and Weaknesses of the U.S. Constitution. (2020, Jun 02). Retrieved from http://studymoose.com/strengths-weaknesses-u-s-constitution-new-essay

Related Essays
Don’t waste time
Get a verified writer to help you with The Strengths and Weaknesses of the U.S. Constitution
Hire verified writer
$35.80 for a 2-page paper
Stay Safe, Stay Original